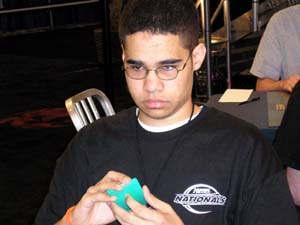 Gregg is a seventeen-year old Regionals qualifier from Maryland. He's known as a solid PTQ player in the area who frequently top 8s Limited events. This is his second U.S. Nationals. Gabe Walls, on the other hand, was a member of the 2003 U.S. National team, and went on a 6-0 run after losing round 1 yesterday. His friends describe him as "a buffoon… but a threat."

Tony: "Is your deck good?"
Gabe: "Let's just say if you are moving all-in, I'd be calling in a second. I got rockets."

Tony opened with a Specter's Shroud followed by a Battered Golem, while Gabe cast a Krark-Clan Grunt. The two three-drops traded, and the board was again clear minus Tony's leftover equipment.

"I do have some hot ones…" was the comment from "TonyG" (as Gabe insisted on calling him) when casting a Thermal Navigator. Unfortunately for him, Gabe had a huge trump card, as he cast a Dawn's Reflection, and then a 5/5 Skyreach Manta plus an Empyrial Plate. He followed that with a 5/5 Arcbound Wanderer, proving what Gabe found out early, but what most players are only now coming to suspect: sunburst is very good. Tony attacked with his Thermal Navigator, which died to the Wanderer. He then finished off the modular man with a Consume Spirit, as Gabe moved all five of the counters over to his Manta.

Gabe cast a Loxodon Mystic and informed last year's National Champion (who was busy getting wrecked by Valentin Moskovitch's turn 4 Plated Slagwurm), "Hey Josh, I have a 13/13 flier," mere seconds before it got crushed by Murderous Spoils. "Well, enjoy my Plate, Tony"

It didn't matter though, as Tony's life total had already been decimated by Gabe's solar-powered army, and the aforementioned Mystic mopped up the leftovers.

Turn 2 Cranial Plating from Tony was quickly nullified by Gabe's Stasis Cocoon. Tony cast an ominous Fleshgrafter and Battered Golem, but remained stuck at three land for a couple of turns. On Gabe's side, he built a small army of weenies in Drill-Skimmer and Vulshok Sorcerer, but the Skimmer transformed into much more of a flying pest when equipped with Empyrial Plate. Thermal Navigator again hit the board from Tony's side, at least giving him a blocker for the 6/5 flier, but he instead chose to take the damage, dropping him to five. 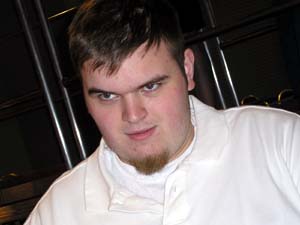 Gabe followed with a Myr Quadropod, making his Skimmer untargetable, as Tony made the mistake of not untapping his Battered Golem when the 1/4 entered play, since the triggered untapping ability is a "may" affect. It wasn't crucial, however, as Gregg untapped it himself with an Arcbound Bruiser, and sacrificed it during Gabe's next attack to give the counters to his Thermal Navigator and trade with the Skimmer.

Vulshok War Boar for Gabe ate the Empyrial Plate on the way in, leaving a 5/5 body in its wake. Battered Golem traded with Vulshok Sorcerer during the next combat, and Tony cleared with Barter in Blood. A 2/2 Suntouched Myr from Gabe was vastly overshadowed by a huge Pentavus from Tony. Fortunately for Gabe, he ripped a Dismantle off the top of his deck like a true master, tossing the counters on his Myr, and the match was over.