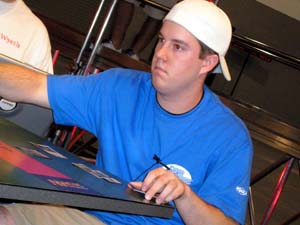 was it, the finals of US Nationals, 2004. Bragging rights, a big trophy, and an even bigger check were all waiting for whichever player pulled out of this one victorious.

Stead won the coin flip and chose to play. He took some time to consider what to do with his opening hand before choosing to Paris. After looking at the lands on the top of his deck, he let out a huge groan.

Krempels: "That's a very un-Bill Stead-like shirt there (referring to Bill's black button down). Do you always pack that shirt for Sundays?"
Stead: "Yeah, but I never get to use it."

Craig's opening hand was three Symbiotes, Vernal Bloom, a Birds of Paradise and some land. He cast a second turn Viridian Shaman to kick off the beats, and then played a Vernal Bloom on turn 3, ramping up his available mana very quickly. In fact, if he drew a Tooth and Nail, he could conceivably end the game right there by dropping a Forest and Toothing out two huge beaters on turn 4.

Stead cycled a Decree of Justice and then burned for one after Krempels pointed out that his Forest produced two mana instead of the normal one due to Vernal Bloom. The crowd heard this and gave Bill a standing ovation, which he responded to by waving and saying "Yeah, thanks everybody."

Three Symbiotes plus a Wood Elf searched out an insane amount of Forests (okay, three), netting Craig an enormous mana advantage. Bill placed his lone Forest over on the side of the playmat so that he would not forget it produced two mana. He then cast Akroma's Vengeance, clearing the board as Craig returned a Shaman and a Wood Elf to his hand. Craig had a second Vernal Bloom in hand and cast it, plus the two Elves again, setting himself up to cast his freshly drawn Tooth and Nail on the next turn.

Elvish beats dropped Bill to thirteen, but he cast Pulse of the Fields in response to Tooth and Nail. When the Tooth resolved, Craig searched out a Triskelion and Kamahl, Fist of Krosa, a huge problem for Stead. He then turned Bill's Forest into a creature, and there was a minor squabble about Bill misunderstanding which Forest Craig meant, since he wanted to respond to the activation and assumed Craig was turning one of his own Forests into a creature. Bill was allowed to tap the Forest in response and floated two mana before Craig killed it with a ping from the Triskelion. At the end of the turn, Bill had lost three lands, and the Trike was Oxidized and shipped to the graveyard.

Bill passed the turn again, and Craig finished him by turning two Forests into men and swinging with the team; activating Kamahl twice, and doing upwards of forty damage.

Stead: "Gah, I didn't even know what Vernal Bloom does. I thought Elf and Nail was dead coming into the tournament, so I never really playtested against it. That's why I screwed up with that Forest… I didn't know it produced two mana."

"Glad this happened playing for the Championship. That screw-up will now go on my permanent record. No matter what I do, the headline will always read 'Stead has no clue, still makes National Team.' I really don't play much Constructed."

Craig kept a hand of Birds, Clamp, Tooth, Shaman, Wood Elves and Vine Trellis, plus a Forest to open Game 2. Stead also kept his hand and cycled a Dragon on turn 2, while Craig played out a Birds and a Trellis, and used a Wood Elf to find his second land. A fourth turn Wrath of God would be brutal for Craig, as it would leave him with two lands and a Clamp, but it was not to be as Craig was able to begin the sick "Clamp, draw two cards" cycle that makes Elf and Nail such a fantastic deck. 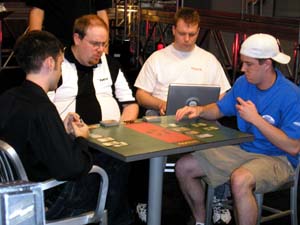 Turn 5 again brought no action from Stead. An unentwined Tooth and Nail put Sundering Titan and Darksteel Colossus into play for Krempels, eliciting a scoff of disbelief from Stead. What a blood bath.

Wrath of God from Bill cleared Craig's board, but left the Colossus in play.

Stead: "I guess he doesn't die?"
Krempels: "You don't know that either?"
Stead: "No, I knew that. (Looking to the crowd) This matchup's fifty-fifty? I don't think so!"

Craig continued to gain advantage by casting two Symbiotes and a Birds and Clamping his way into more cards. The Birds, Symbiote, and a Colossus all brought the noise next turn, forcing Stead to Pulse of the Fields or die. Unfortunately, all Bill had on the subsequent turn was another Wrath, which didn't save him from the Iron Giant.

Stead: "Gah, lemme see my sideboard. I'm doing something. I'm boarding Silver Knights! This I horrible! All we were talking about before was that I had to hope you were dumb and you didn't board in Sundering Titan."

Craig looked briefly at a first hand of Skillclamp (ahem), Vernal Bloom, and Triskelion plus lands before shipping it back for a new six. As a brief side note, Craig Krempels will be the last player in the U.S. (at the very least) to play Skullclamp in Standard at a major tournament.

A first turn Weathered Wayfarer from Stead actually got his beats on, as neither player laid a second land.

Stead: "God, I can't believe you already missed a land drop."
Krempels: "And you…"

Craig actually went so far as to discard a card on turn 3, even though he had another land in his hand the whole time (and a Vine Trellis), so as not to allow Stead to get any real use out of the Wayfarer. On turn 4 (though it looked like turn 1) Craig's hand was Titan, Trike, 2 Viridian Shaman, Wood Elves, Wooded Foothills, and Skullclamp. His resolve not to lay the second land continued, however, as he merely cast Skullclamp and said "Go."

Stead doubled his beatdown with another Weathered Wayfarer while staying at one land, playing out one of the stranger finals matches in history. Krempels finally broke the stalemate at this point, sacrificing his Wooded Foothills, and casting Vine Trellis. Stead used one of his Wayfarers to search out a land, and ended up discarding a Wrath of God before ending his turn. 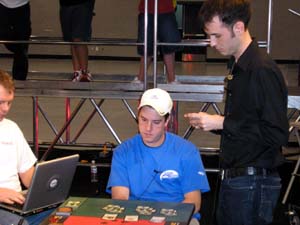 Some Symbiote/Wood Elves shenanigans allowed Craig to go from two lands to five in the blink of an eye, as he tried to outrace Stead's Cloudpost searches. Stead merely played another Cloudpost (his second) and passed the turn back to Craig, who searched out two more Forests with stupid Elf tricks, giving him seven Forests, and netting him an eighth after he played his land for the turn. Clamping a Wood Elves also let him draw a Tooth and Nail, and setting up a devastating turn on his next untap.

Stead searched out the final two Cloudposts in his deck Craig passed the turn. From this side of the board, it looked like he might be trying to setup a Mindslaver in order to use Craig's own deck to wreck him. Without that sort of advantage, his chances in the match were slim to none.

A Tooth and Nail with entwine again found Darksteel Colossus and Sundering Titan and put them into play. Stead did in fact cast Mindslaver and activate it, then walked around to Craig's side of the board to play his hand for him. Craig revealed 2 Triskelions, 2 Viridian Shaman, a Skullclamp, and a land.

Bill laid a Foothills and didn't find anything, then cast a Triskelion, pinging Craig twice and the Trike once before passing the turn. Then on Bill's actual turn, he cast Decree of Justice for seven Angels, netting himself a game in the process.

Krempels chose to play and kept an opening hand of 2 Foothills, Vine Trellis, Birds, Shaman, Tooth and Nail, and a Forest. Stead was forced to mulligan to six, but kept the second set.

"Why? Dammit!" was the cry from Stead, as Craig played a first turn Birds, signifying he had a Weathered Wayfarer in hand. Things just got worse for Bill, as Craig cast Vine Trellis and Viridian Shaman on the next two turns, giving him a two mana advantage and a ten-turn clock. Bill slammed his second land on the table disgustedly before passing the turn, then taking two from the Shaman, and watching Craig cast Vernal Bloom. Bill just laughed when he drew his next card before sending his Wayfarer into the red zone and casting a twin. "This is the worst card in the deck now!" 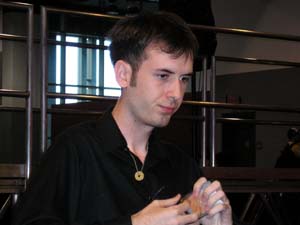 Krempels was faced with a difficult decision on the next turn, as he had to decide between starting his engine with Skullclamp, casting a Triskelion, or just waiting a turn to drop a huge Tooth and Nail. He chose to Clamp his Birds of Paradise, drawing a Wirewood Symbiote and another land in the process, and then passed the turn. Stead paused for a bit to consider his options, signaling that he had some options, but was not sure which one was best. He chose to lay a Temple of the False God (inactive because Bill only had four lands), and then pass the turn.

Craig drew his card, then cast an entwined Tooth and Nail for two Sundering Titans, nailing Stead's only two Plains, and forcing Bill to extend the hand and concede defeat.