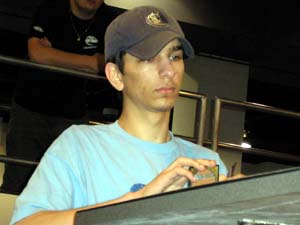 been some talk that the Americans have gradually been losing ground on the Pro Tour, with Europe and Japan not only catching up, but surpassing the United States. It seems that the game has reached a crossroads in the States at this point for the older guard, as some of the better known veterans have faded away. However, as always, there are younger players waiting to take their spots. For this reason, it's only appropriate that America will send a young team to Worlds. Craig Krempels and Bill Stead are guaranteed spots- both have their fair share of success on the Pro Tour and Grand Prix circuits. Still, they may have the desire that comes from having more to prove, which would create the desirable combination of talent and motivation that often leads to success.

The third member of the team will be decided by this match. Unlike Stead and Krempels, Postlethwait and Zoz are "relatively unknown", although you shouldn't let that term fool you. In the past, U.S. Nationals has been a proving ground for future stars; players such as Eugene Harvey, Brian Hegstad and Gabe Walls made the National team as unknown players, only to achieve even more success later on. It remains to be seen if either of these players will follow the same path, but in any event this match would be an important first step in that direction.

Thanks to March of the Machines, Zoz was able to nullify Postlethwait's ability to have a significant amount of mana, and Wrath of God assured that he wouldn't be able to make a comeback.

Postlethwait opened with a Spellbomb, and played Thoughtcast on turn two. Another followed on turn three, along with a Skullclamp and an Arcbound Worker. Calmly, Zoz played Damping Matrix to nullify all of Postlethwait's plans. A Disciple came out a turn later, but Postlethwait would need to take care of the Damping Matrix before he could do anything significant. He was prepared to do so with two Shatters in hand, but didn't have a way to get red mana. Meanwhile, Zoz was setting up more, casting two Thirst of Knowledge in consequent turns. This led to a face-down Exalted Angel, and Postlethwait went digging with Thoughtcast. The best he could do was play an Enforcer, and Zoz had his third Thirst of the game. March of the Machines caused Postlethwait to lose all his lands, and the rest was academic. 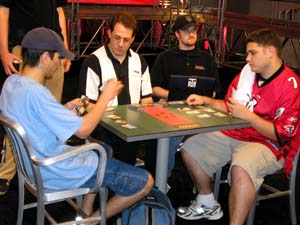 Zoz mulliganed down to five. Postlethwait started with Arcbound Worker, and Zoz had a first turn Chrome Mox. This turned out to be quite important, as it allowed him to counter Postlethwait's Arcbound Ravager with Mana Leak. Still, the mulligans took their toll on Zoz, as he missed his third land drop. When he made it a turn later to play a face down Exalted Angel, Postlethwait was waiting with a Mana Leak of his own. Postlethwait made a Frogmite and began attacking for three a turn, and Zoz was left with a play that wasn't particularly effective, but still necessary. He cast March of the Machines off a second Chrome Mox, losing two of his mana sources in the process. Interestingly, Postlethwait allowed it to resolve despite the Mana Leak in his hand, as he may have anticipated being able to win off his creatures. Purge killed the Frogmite, and Postlethwait played a Skullclamp. Damping Matrix would have made things rather difficult for Postlethwait, but he had a Shatter. Purge killed a Skullclamp, and another a Pyrite Spellbomb, as Zoz spent quite some time waiting to draw a fourth mana source. Postlethwait played a Disciple, followed by a land that headed straight to the graveyard to cause Zoz to lose a life. This put him at one, and a turn later he conceded.

Postlethwait opened with a Disciple, and played a second on turn three, which was Mana Leaked. Zoz simply played a land and ended his turn, and Postlethwait played Frogmite, Thoughtcast, and then another Frogmite. Zoz's Damping Matrix was targeted with Mana Leak, so he used a Mana Leak of his own to let it resolve. Postlethwait had another Thoughtcast, and attacked with his team for five. Shatter blew up the Matrix, and Postlethwait had Mana Leak to counter Pristine Angel. The next attack followed by Shrapnel Blast was enough to finish off Zoz and force a fifth and deciding game.

Skullclamp came out on turn one, and Postlethwait challenged Mana Leak on turn two with a Ravager- Zoz had it. Postlethwait missed his third land drop, and although it seemed that he wanted to stay back with Mana Leak to prevent March of the Machines from resolving, with his lack of mana he couldn't afford to wait. He had to gamble, and devote a turn to developing his board. In one turn he played Pyrite Spellbomb, Frogmite and Thoughtcast, which got him to a desperately needed third mana source in Glimmervoid. This led to an Arcbound Worker, and Postlethwait now had a good board, but Zoz had a one turn window of opportunity to do some damage. 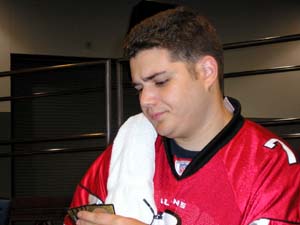 He had March of the Machines, and now Postlethwait would have to pull out a win with what he had out. He attacked with his team of animated artifacts and artifact creatures to deal five damage, then played a Disciple. Zoz had Damping Matrix, but nothing else. Postlethwait's second Disciple was handled by Purge, and Damping Matrix blocked and killed Frogmite. Zoz had the Wrath of God needed to completely cripple Postlethwait's chances, leaving him with no permanents. An Exalted Angel later, Zoz was headed to the National team.