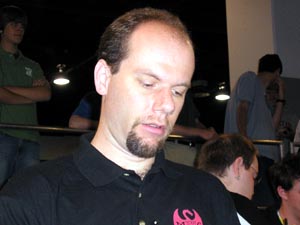 Humpherys has added yet another accomplishment to his Magic career, but unfortunately it's likely to end here and now. His Goblin deck is a massive underdog to put up a fight against Ben Zoz's blue-white control, particularly in a five game series with sideboarding. Between Silver Knights, Pristine Angels, Exalted Angels, Worship and board clearing effects, the matchup is a nightmare for a red deck.

Humpherys mulliganed to six. His original hand contained two lands, but also the higher end of his curve with cards like Goblin Goon and Clickslither. The second hand only had Oxidize, Goblin Sledder and Electrostatic Bolt as action cards, so he had to go down to five. Right afterwards, Zoz mulliganed to six.

Humpherys played a Sledder, attacking for one on turn two. Goblin Warchief came out on turn three to put a little more pressure on the board, and Zoz played Damping Matrix. Goblin Goon let Humpherys attack for nine, but he passed the turn with a hint of despair, as he knew that he was wide open to get crushed by Wrath of God. Indeed, that was the case, and Humpherys was left with no creatures. He Oxidized the Damping Matrix, and a turn later played Goblin Sledder. Zoz cast Thirst for Knowledge on end step, untapped, and summoned Silver Knight. Worship a turn later was enough for Humpherys to scoop.

This time, both players started with full seven card hands. Humpherys played a Prospector, and a Sparksmith on turn two. Warchief came out on turn three, and once again Zoz cast Wrath of God to bring things back to square one. Humpherys started to rebuild with Sparksmith, and Zoz played Exalted Angel face up and ready to go. Humpherys's lone Sparksmith made it seem like he wouldn't have a chance, but Siege-Gang Commander came off the top of the deck. In response, Zoz cast Thirst For Knowledge, and the Commander came into play. This gave Humpherys the five damage he needed to shoot down the Angel, but things still weren't looking spectacular. Zoz cast another Thirst on end step, and had the Wrath of God to set back Humpherys once more. This time, there was little chance for recovery. Silver Knight followed, and Pristine Angel finished the game. 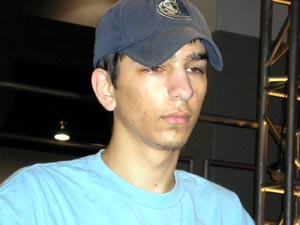 Humpherys played a second turn Sledder, missing his third land drop. All he could muster was a second Sledder, and the third land still didn't show up two draws later. Humpherys did draw into Skullclamp, but Zoz had Mana Leak. Soon he had six lands to Humpherys's two, and a pair of Pristine Angels along with Exalted Angel did the rest.