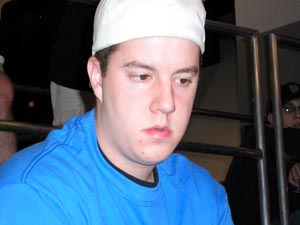 and Alex both played Elf and Nail during the Constructed portion of US Nationals so this quarterfinal match was an almost complete mirror match. However, one of the key differences that Craig's deck had was the presence of Triskelion. The Triskelion would allow him to fire down Alex's Symbiotes and then his Wood Elves. Craig's recent successes include a 2nd place finish in Grand Prix Columbus and a 9th place finish in Pro Tour Yokohama. Alex placed in 19th a month ago at Pro Tour San Diego and last year at Nationals finished in 19th place.

Alex won the die roll but then made the unconventional decision to draw first. Alex must have already known that both players were about to take a mulligan. Once Head Judge Mike Guptil gave the go ahead the Elves were off to the races. Both players established their early mana base before the real fun began. While Skullclamp might be banned in Standard, the only thing holding Skullclamp back today is Viridian Shaman. Craig played his Skullclamp and equipped a Wirewood Herald to fetch a Wood Elf. Alex didn't want to wait around for the Skullclamp insanity to take over so he quickly targeted it with Viridian Shaman. Alex then tried to establish Skullclamp advantage by playing his own. Craig had the Viridian Shaman waiting as well.

As Alex stalled on mana Craig used his Vine Trellis, Wood Elves and Wirewood Symbiote to pump out Forest after Forest. To compensate for the 10 land advantage Craig had established over the course of a few turns Alex had to resort to Vernal Bloom to try and generate mana.

With Craig's deck completely out of Forests it was just a matter of time before he started to draw threats. First, Craig cast a Triskelion to kill Alex's Birds of Paradise and a Wood Elves. Alex's hand size grew with expensive spells he was unable to cast. Finally, Craig struck the deathblow: over the course of one turn Craig dropped out a Vernal Bloom of his own and a Skullclamp, then he abused the Skullclamp until he found a Tooth and Nail that he entwined to get Kamahl, Fist of Krosa and another Triskelion. Kamahl, Fist of Krosa turned a couple of Forests into 1/1 creatures which then became 7/7 trampling monsters. Alex couldn't find enough toughness to stop Craig's team and found himself down a game.

After the Overrun Craig let out a little giggle which Alex could relate too. Each player had attacked with many Forests over the course of the weekend. So the way the match ended was no surprise to either player. Between games Alex commented, "I wonder how you sideboard this match," while each player pulls out card after card from their deck. (Both of the players pulled Vernal Bloom from the main deck because in the mirror your opponent got to use the extra mana first.)

Alex decided to keep but Craig decided to mulligan after a wave in front of his face indicating his hand was stinky. During the mulligan Alex said, "You had the bloom in your hand forever." Craig replied, "Oh yeah!"

Alex and Craig each played a first turn Wirewood Symbiote. On the second turn the two Symbiotes traded when Alex attacked. Alex then played a replacement Symbiote. As Alex played his 3 land out Craig said "Don't do it to me, don't do it to me," referring to the powerful Symbiote/Wood Elves combo but all Alex could do was attack for 1 and pass the turn. Craig then played out a Wood Elves and a new Wirewood Symbiote of his own.

Alex laid a land and said done on his 4th turn while Craig once again started building his mana with the Wood Elves. After Alex just said done for his second straight turn a look at his hand revealed Tooth and Nail, Darksteel Colossus, and 2 Oxidize.

Craig looked as if he was playing solitaire Magic returning Wood Elves time and again. After a turn or two Craig destroyed a Mountain and a Forest of Alex's with Sundering Titan.

Alex's lone Wirewood Symbiote was called into duty as it bravely jumped in front of the Sundering Titan. Craig put a nail in the coffin with an Entwined Tooth and Nail for a Darksteel Colossus and Kamahl, Fist of Krosa. Alex looked at his only two forests and returned them and the rest of his cards to his library.

There was no banter between games 2 and 3 as Alex desperately looked through his sideboard for any answers. Craig got thirsty and went into his bag. "Ah, nothing like a warm soda for refreshment," and with amazing grace he twisted the top off. The soda bottle fizzed all over Craig and the play mat. "I'm a smooth operator," Craig boasted. As Craig went to the restroom Alex remarked on his chances for a comeback, "Well, it's a good start anyhow."

Alex looked at his opening hand for about 2 seconds before sending it back for his 2nd mulligan of the match. Then it was Craig's turn to mulligan. Alex led with a Skullclamp while Craig placed a Birds of Paradise. Alex laid down a Birds of Paradise but his was placed into the Skullclamp in order to draw 2 cards. Craig then played Wood Elves, placed a Forest into play and cast a Wirewood Symbiote and a Skullclamp of his own.

Alex played out his own Wood Elves but didn't have the Wirewood Symbiote to match Craig's. Craig replayed his Wood Elves as the Forest fetching madness continued for the third consecutive game. Craig then played a Viridian Shaman to smash Alex's Skullclamp. When Craig attempted to Skullclamp a Birds of Paradise Alex fought back with Oxizide.

On the next turn Alex played out a replacement Skullclamp, killed his Wood Elves to draw 2 cards and found a Forest. Craig returned Viridian Shaman to ban the Skullclamp. Craig then went into his normal routine and had out 7 before the turn had ended 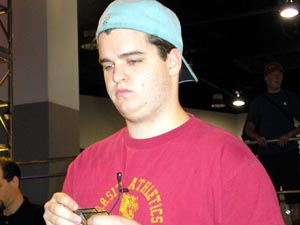 Alex sacrificed a Wooded Foothills to search for a land but took the opportunity to look at his deck. He then cast Tooth and Nail without entwine to just fetch 2 Darksteel Colossus.

Craig entwined a Tooth and Nail on his turn to get Sundering Titan and Kamahl, Fist of Krosa.

Alex Melnikow extended his hand, as there was just nothing else he could do.