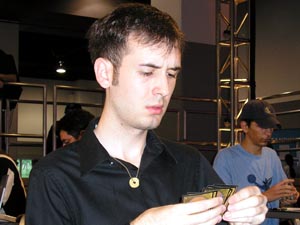 am not going to even try and build up the drama of this match--it was a massacre. It was as close to decided before they even started to play as any Top 8 match in history. Mike Aitchison was playing a red-green beasts deck. His opponent was Bill Stead playing green-white control with eight main-deck Wraths.

Mike Aitchison seemed to know he had no chance after an evening of play testing with his glum friends who were watching from along the rail. The only person who didn't want to say the match was predetermined was his opponent Bill Stead, "Why do people keep saying that?"

Mike laughed, "I have had total strangers come up to me and tell me I have a zero chance of winning."

Bill chuckled and admitted that he was the favorite, "You have like a ten percent chance of winning…I mean you can win any match-up with any deck."

Nether player mulliganed. Stead led off with a pair of Plains and Mike--who was on the draw--sacrificed Wooded Foothills EOT and promptly mana-burned to eighteen. He untapped and played a Trellis and parlayed it into a Baloth on the third turn.

The beast attacked into Stead's four lands and Aitchison made a Pulse of the Tangle token. He floated two mana at the end of his turn and burnt for two. Stead had no play and passed the turn back but cycled Decree of Justice for three tokens on Mike's next attack and chump blocked two guys--Mike added a Molder Slug to the board. The life totals were sixteen to fifteen in Stead's favor.

Stead had no play and Mike burned for another point EOT. He added five mana to his mana pool before attacking and fell to ten. He sent in the team and Bill cycled Decree for four tokens and sent three tokens in as cannon fodder. Stead was now ahead on life though fourteen to ten--he had lost a life to Windswept Heath.

Bill got his beat on with his two tokens and sighed, "I can't hold off any longer." he cast Wrath of God and leered at Aitch, who had been mana burning all game, "Are you sacrificing any beasts to gain life?" Mike sacrificed one and went to twelve. Stead did nothing and Mike played another Pulse of the Tangle.

The next attack took Stead to eleven and Mike fortified with a Ravenous Baloth. Stead quietly played and sacrificed Mindslaver. Mike sacrificed his Baloth and tapped a city and another mana to burn for three damage.

Bill came around to Mike's side of the table and tapped his opponent out and made sure there was nothing in hand to deal with his next play--Mike was left with just a pair of Oxidize. He moved back to his seat and asked Mike, "Are you done?"

Mike just looked at him and Bill realized that he still controlled the turn, "Oh…I mean I'm done."

Stead tapped all of his mana and gave his opponent one turn to deal with Decree of Justice, "Let's see if you top deck…make three angels."

Mikes showed him Wooded Foothills off the top and they moved to the second game.

Mike took out his Oxidizes and two Electrostatic Bolts to bring in four Grab the Reins and two Duplicants. Stead took out four Oxidize and brought in three more Mindslavers and a Weathered Wayfarer. He was apologetic as he slid the cards into his deck, "After sideboard…dude I'm sorry. I thought if you took Game 1 maybe you had a shot but after board I am sitting on your side of the table all the time."

Mike sighed and looked over longingly at the match that Kibler was playing using a similar deck, "I know he has only two Mindslaver."

"Oh, I didn't bring those in," smiled Bill sarcastically.

"I'll tell you how I sideboarded after the match."

"I pretty much know how you sideboard--at least I know what I think the best sideboard plan is."

They talked about Game 1 and the Wrath of God. Bill explained that in last night's play testing he found that, "I have to overextend as much as possible and hope you don't have Wrath."

"I think you need Bird on the draw."

Mike showed him two Birds as he threw back his opening seven. Bill was incredulous, "You're throwing back two birds? That is the best card in your deck against me."

Mike burned for one at the end of the first turn and announced, "little late," when he played his turn two Bird. He Pulsed on turn three with no help from his Bird whose sole function was to mana burn. He attacked with the guy and made a Molder Slug.

Stead cycled Eternal Dragon and sacrificed a Windswept heath on his next turn to Wrath. Mike just put out another 3/3 token. Stead seemed to be in control and played a Solemn Simulacrum to find his fifth land. Mike used Contested Cliffs on the invitation list and they both grinned, "I saw it," declared Mike. 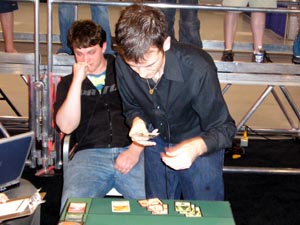 He attacked on the next turn and Stead had the Wing Shards. He cycled Renewed Faith but chose not to gain any life. He returned his Eternal Dragon to hand and laid down his third Cloudpost. A hushed, "Oh man that's game," drifted over from along the rail--Mike's hand was Duplicant, Grab the Reins, and Starstorm.

Stead had enough mana to play both Eternal Dragons and that is just what he did. Mike removed one from the game with Duplicant. Stead shrugged and played Mindslaver. "I'm not sure how this end of turn stuff works so I will just do this now." He sacrificed a Windswept Heath and cycled Decree of Justice for two tokens during his main phase.

He swung around to Mike's side of the table and looked at his hand. He could have used Grab the Reins to fling the Duplicant at Mike/himself but in the interest of time just attacked Bill/himself without blocking and tapped Mike out. He had exactly enough to crack back with his Dragon and two tokens for the quick win.

Mike cursed the fates that paired him up with a green-white deck and not a match-up he dominates like Affinity. "I wasn't expecting to play white control in this tournament so I didn't play Flashfires--or better yet Sulfuric Vortex."

"Of course you weren't. Everyone was so anti-control for this tournament so control was the right choice. It switches back and forth every year." As if to emphasize the point, while they were talking Dave Humpherys fell to Billy Zoz's blue-white control deck.

Mike stared at a hand of two lands and expensive spells and shipped it back but he wasn't sure if that was the right call. Bill Stead had no answers, "I don't even know what you keep in this match-up. You need some acceleration and then go big guy, big guy…wrath?"

Stead lit up on his first turn when he announced, "My one Weathered Wayfarer."

"I can't believe you brought that in but I guess you need to find something to bring in for Oxidize."

"Yeah it was either this or a Silver Knight and that seemed awful."

Mike chose not to play a land and Stead attacked for one without playing a land either. "That was such a bad play on my part," pointing at the attacking Wayfarer. Now if Mike played a land Bill could not activate it EOT.

Mike chose not to play another land. Stead decided to play land and announced, "What the heck, I Turf Wounded you with Wayfarer." Mike declared, "blocker," as he played a Vine Trellis. He played another on the next turn. Stead played a Solemn Simulacrum prompting Mike to smile, "I am going to make an amazing play."

A Duplicant sat on Jens and removed it from the game--I guess in this match-up Mike needed all the little victories he could find. Mike Electrostatic Bolted the Wayfarer on the next turn and got in for two. Stead was cycling Eternal Dragon at this point while Mike kept beating for two.

Finally with the score at fifteen to thirteen in Mike's favor the beasts player dropped an Arc-Slogger. Stead sighed, "I wanted to make the kids happy and Arc-Slogger you to death with your own guy but I can't wait the turn…Vengeance."

Mike had no action on his next turn and did not want to wait until Bill played an Eternal Dragon. He cast a Duplicant as a 2/4. Bill had the Mindslaver and laughed at the card he pulled, "I drew Arc-Slogger but I can't cast it." He Grabbed the Duplicant and flung it at Mike/himself, cycled Starstorm for zero and tapped him out.

Stead dropped a Temple and made four Angels, "You have one out."

"I meant you had one card you could draw but OK."

Mike drew his card slowly and the crowd cheered. Stead's eyes bugged as Mike announced, "Starstorm for four." Head Judge Mike Guptil wandered over to the rail of spectators and chided them, "Thanks for your poker faces." 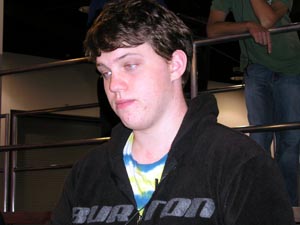 Stead returned two Dragons to his hands and passed the turn to Mike who played the Slogger and a Bird but Stead had the Wrath--he poked him with the Slogger.

Stead shook his finger at Mike, "I am going to give you one more chance…" and made four more Angels.

Mike peeled his card slowly and when he lifted it from the table there was not a peep from Mike's friends--and it was not because of the judges warning.

Bill advances to the semi-final round to square off against Billy Zoz and his blue-white March of the machines deck.