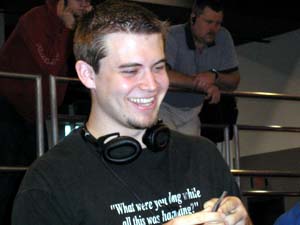 Postlethwait is a name to keep an eye on if you are interested in the future of U.S. Magic. He was the only undefeated player coming out of the Constructed portion of the tournament, and this Floridian was looking to keep his record spotless with a win in the quarterfinals. Standing in his way was none other than the Dragonmaster himself, Brian Kibler. Kibler didn't have the same incredible undefeated run this year as he did in the 2003 tournament, but the result was the same, as he has now made the final day at U.S. Nationals in back to back years.

The matchup between these two decks promised to be one of the more interesting in the quarterfinals. With Stead and Zoz practically having Byes in their matches, and Krempels and Melnikow duking out the Elf and Nail mirror, this was the only quarterfinal that featured two decks with contrasting styles that could go either way. Kibler's W/g deck was designed to have a strong matchup against the Affinity deck, but as we all know, whenever Arcbound Ravager, Disciple of the Vault, and Skullclamp are in the same deck, anything can happen.

Billy chose to keep a hand of four lands, Clamp, Welding Jar, Arcbound Worker. Kibler also kept his first seven, and as soon as the cameras were ready, they were off.

Kibler: "Arcbound Worker is not the scariest thing."

Billy built a formidable early board of Jar, Skullclamp, Worker, and Disciple of the Vault, while Kibler merely built his land base and waited for his mass removal spells to come online. The Worker died for the cause, drawing Darksteel Citadel and Shrapnel Blast for Billy, but his hand was severely lacking what one would call "gas." A Pulse of the Fields from Kibler made the life totals 19 to 20 in favor of Postlethwait.

Billy finally played a Frogmite and Clamped him up, giving him a more reasonable clock, but he lost his Disciple to Clamp while trying to dig for some tempo.

Kibler: "Isn't that card banned today, Judge?"
Judge: "Not really. Everywhere else in the world, perhaps, but it's still legal here."

Kibler paused for some time, determining which land to play before playing Elfhame Palace. Frogmite died with the help of a second Clamp, drawing Billy four more cards, only one of which was a creature. The Affinity deck had now produced plenty of lands, two Shrapnel Blasts, three Clamps, and a Shatter, but would not give up anything resembling a healthy beater for Billy to swing with.

Billy began taking mana burn at the end of Brian's turns to try and take Pulse of the Fields out of play. With two Blasts in hand, he only needed to do six more damage

Billy: "I know I play Ravagers in this deck."
Kibler: "Waaaah. I've played one spell this game, and you're complaining?"
Billy: "I'm going to be done with my turn."
Kibler: "Are you really? That's AWEsome."

Billy took four more mana burn at the end of Brian's turn, dropping his life total lower than the Dragon Master, despite drawing approximately fourteen more cards than Kibler thus far. His next draw (after a cycled Pyrite Spellbomb) finally yielded an Arcbound Ravager. Kibler attacked with a previously cast Eternal Dragon, and cast a second one as a deterrent to any attacks.

Billy attacked with a 6/2 Ravager, and Kibler chose not to block, but thought long and hard about whether to do anything else before damage was put on the stack. He finally decided Wing Shards was the right play, resulting in Billy drawing four cards as the counters moved over to a fresh Myr Enforcer. Billy cast another Enforcer, Clamped it up twice, and discarded a Vault of Whispers before passing the turn.

Kibler sent both Dragons into the red zone, and Billy was forced to Shrapnel Blast one so that he could stay alive. The second Dragon hit, dropping Billy to myr five life, but Kibler was again facing possibly lethal damage next turn, so he Wrathed the board clear.

Billy: "You're at sixteen? That's a lot of life."
Kibler: "I'm wiiinnning! Go go Dragons… I'm a big fan. Though I do remember when Wrath of God used to yield me card advantage instead of drawing you four more."

Billy's new hand now contained a Disciple, a Shatter, Arcbound Worker, Clamp, Pyrite Spellbomb, and two Shrapnel Blasts. A Clamp on Worker yielded the second Ravager in thirty cards, and when combined with Disciple, set up an ominous board position for Billy. Kibler cycled a Renewed Faith, and then Oxidized the Ravager and cast Pulse of the Fields.

Kibler: "You can blame Josh Ravitz for my deck being unreadable to English speakers. Last year I borrowed a deck from Ravitz… Finkel borrowed one in 2000. It's a theme. If you want to make U.S. Nationals top 8, borrow a deck from Ravitz."

Thoughtcast for Billy found a second Disciple of the Vault, prompting a "What is he at?" question from the Affinity player.

Kibler: "Uh oh, don't like to hear that after he's drawn some cards."

A Disciple got his beat on, dropping Kibler to nineteen, and a yet another Worker took one for the team, drawing a Frogmite for Billy. Kibler's life was high here, but he was obviously in a precarious position, since with two Disciples and eleven artifacts on the board, any Ravager drawn would end the game, as would a resolved Akroma's Vengeance. Unfortunately, Brian didn't draw a removal spell, cast a Dragon, and ate seven at the end of his turn from Shrapnel Blast.

Kibler: "What? Humpherys is done with his match and I'm in game 1? This is like the Twilight Zone of Magic."

A Ravager wasn't even necessary this time, as between attacking, sacrificing Welding Jars, Pyrite Spellbomb, and another Blast, Billy was able to burn Brian out from twelve.

Billy's game 2 hand was much better than game 1, as he started with two Clamps, Arcbound Worker, Frogmite, and Myr Enforcer, plus a Darksteel Citadel and a Great Furnace. Clamp, Frogmite, and Worker all hit the board early for Billy, as Kibler cycled an Eternal Dragon looking for more land. As Billy's second Clamp hit the board, Brian's eyebrows raised a little, since fighting through two of them is particularly difficult for the W/g deck. Attempts to Clamp Arcbound Worker and Frogmite both failed, as Kibler alternately Oxidized and Purged the targets, the idea being to deny Billy cards by removing the targets for Skullclamp and hoping he didn't draw more creatures.

Billy played his third Skullclamp, and started beating Brian down for six a turn with a double-Clamped Enforcer, dropping Brian's life to a lowly seven on subsequent attacks. A Pulse from Brian brought his life back up to eleven, and fifteen on the next turn before dropping back to seven from the Enforcer attack. Some more Pulse tricks from Kibler bought him an extra turn, but in the end Skullclamp advantage did Kibler in, as he could find no adequate answers to the card drawing machine.

For once Billy's hand was tricky, as he threw back a hand of two Glimmervoids, two Mana Leak, Shrapnel Blast, Pyrite Spellbomb, and Myr Enforcer. He kept a second hand of three land plus Disciple, Frogmite, and Shrapnel Blast. By turn 2, he once again had a solid board of Disciple, Frogmite, Welding Jar, and two lands. Billy drew an Arcbound Ravager, but chose not to cast it before passing the turn to Brian. Kibler promptly Purged a Disciple, as Billy mana burned himself down to sixteen to keep Pulse of the Fields from undoing all his hard work.

Ravager and a second Disciple hit play, turning Billy's board position from antagonistic to downright threatening. Kibler Purged a Ravager this time, causing Billy to briefly lament the uselessness of his two Welding Jars. Without multiple Skullclamps in play, the matchup definitely favored the control deck, as Kibler proved when he Wrathed the board clear of threats. Akroma's Vengeance cleared away the Welding Jars, and the game plunged into a stall as both players went "Land, go" for a few turns.

A third Akroma's Vengeance from Kibler (just after Billy had finally drawn a Skullclamp) left the Affinity player with only a Darksteel Citadel and a Glimmervoid on the board. Now it was up to Brian to find a threat and close in on the kill before Billy recovered.

He finally found it many turns down the road and cast Decree of Justice for five angels. After thinking about the board situation, Billy conceded.

Playing first for the first time all match, Billy kept a hand of 2 Jars, 2 Shrapnel Blasts, Arcbound Worker, and two lands. Kibler kept his hand, and they were off. Billy played a first turn Worker, but had no other pressure until turn 5 when he cast a Frogmite. The Frog was promptly Purged on the next upkeep. Billy started milling through his deck with Thoughtcasts, but could only find more Workers and a Frogmite in two subsequent attempts. Kibler was happy to trade Soldier tokens for staving off damage, and his life total was a robust twenty-five. Billy's hand was now an insane four Shrapnel Blast plus a Mana Leak though, so all he needed was the slightest edge to take home the match.

Kibler refused to give him that as he cast Wrath of God, forcing Billy to send two Blasts at Brian's dome. Akroma's Vengeance earned Brian two more Blasts to the nugget, dropping him to nine, but emptying Billy's hand (and deck) of direct burn. Eternal Dragon from Kibler finally gave Brian a clock, but Billy was recovering his mana base rapidly. Arcbound Ravager entered play, but Kibler Vengeanced away the threats again and cast a second Eternal Dragon. One more attack, and the Dragon Master had suddenly evened the match.

Kibler: "Keep getting draws like that. Lack of Skullclamps is clearly a Good Thing™ for me. Like I said, I wanna help you make your flight out of here. I'm a good guy, ya know."

Billy kept a hand of two Ravagers, a Mana Leak, and four land while Kibler kept his hand as well. A second turn Ravager and third turn Enforcer from Billy created a very healthy clock, but Kibler had the Oxidize for the Enforcer. A second Ravager entered play, giving Billy three points of damage on the board, but only land and Mana Leak in his hand. Both Ravagers entered the zone, and Kibler blocked with a Soldier token, staving off some beats for a turn. Thoughtcast drew Billy his first Skullclamp of the game. He then cast the Clamp, Clamped a Ravager, slamming headfirst into a huge Wing Shards from Kibler. 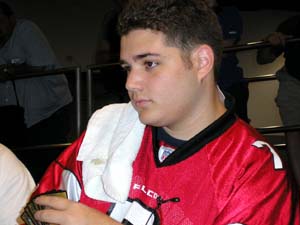 Frogmite and Disciple of the Vault kept a clock on Kibler, as he cycled an Eternal Dragon to get another land. Wrath of God got rid of that clock, but Skullclamp and Billy's draw managed to give Billy another Frogmite, an Arcbound Worker, and a Myr Enforcer. A Clamped Worker revealed another Disciple, which quickly entered play, giving Billy a 5/5 Enforcer, Frogmite, the cleric, Clamp, Welding Jar, and seven land.

An end of turn Purge took out the Disciple, as Brian tried to make certain the only damage he took was during the attack step. Akroma's Vengeance from Kibler met Mana Leak, and Billy suddenly had an opening. Frogmite and Enforcer attacked for ten, and Shrapnel Blast sounded the Dragonmaster's death knell, giving him a record of 0-3 in the match versus an active Skullclamp.