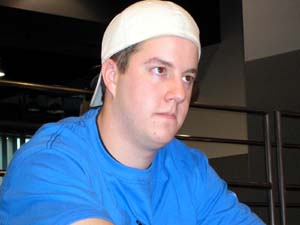 win here not only guarantees a spot on the U.S. National team at Worlds, but a shot at the National Championship in the finals. Even though it's possible to still make the team in the third/fourth playoff match, there's plenty on the line here. Postlethwait is playing Affinity, while Krempels has the Togit/CMU Elf and Nail deck.

Both players mulliganed down to six. Postlethwait opened with Disciple of the Vault and Welding Jar, while Krempels had Vine Trellis. Skullclamp allowed Postlethwait to get some cards off his Disciple, and he soon had a second Jar along with a free Frogmite. Krempels accelerated a little more with Wood Elves, and had a Skullclamp of his own. Postlethwait played a second Skullclamp, followed by Myr Enforcer. One Clamp went on Frogmite, and it got through for damage. Since Postlethwait only had two lands, he would have to wait a turn to get cards off the Frogmite. Meanwhile, Krempels played another Wood Elves, and cycled through both with Skullclamp. He then played a Birds, and ended his turn.

Postlethwait continued to go up cards with Thoughtcast, and then summoned a Disciple. His team attacked, and the Birds chump blocked the Enforcer. Another Clamp went on the Frogmite, giving Postlethwait four cards. Krempels Skullclamped Wirewood Herald to get a Viridian Shaman, which tried to destroy the Enforcer, but a Jar saved it. He played a Symbiote, and ended his turn. Thoughtcast drew Postlethwait into Arcbound Ravager, and he played enough artifacts to end the game via Disciple.

Krempels had a first turn Symbiote, and Postlethwait played a Worker along with a Jar. Vine Trellis followed on turn two, and Postlethwait had a Ravager. Naturalize drew a Jar sacrifice, and a second Naturalize sent it to the graveyard. Postlethwait declared Thoughtcast before realizing that it would cost him two, setting him back a bit as he could have saved a mana on the turn. Instead, he had to settle for attacking with the 2/2 Worker, and played a Disciple. Viridian Shaman destroyed Seat of the Synod, and it was bounced with the Symbiote and replayed to take out Vault of Whispers. This slowed down Postlethwait quite effectively, as all he could do on his turn was play a land and say go.

The Shaman attacked and the Worker blocked, and the Shaman bounced back after damage went on the stack. When it was replayed, Postlethwait was waiting with Mana Leak. Still, he was on the ropes, and Krempels looked to take full advantage. He played a Skullclamp, and on the following turn sacrificed a Herald to get another Shaman. It blew up another land, and Krempels played another Shaman from his hand to leave Postlethwait with only a Darksteel Citadel. Still, all the while, the Disciple had been activated many times, and Krempels was at nine. Postlethwait played a Great Furnace along with a Welding Jar, and ended his turn. 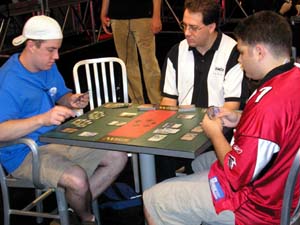 Wood Elves provided a land and two cards off Skullclamp, and a bounced Shaman targeted Great Furnace. In response, Postlethwait sacrificed it to Shrapnel Blast, dealing six thanks to the Disciple and bringing Krempels down to three. Postlethwait drew and smiled as he played a second Welding Jar, effectively one dead artifact away from winning the game. That is, until Krempels played Duplicant to remove the Disciple. In response, Postlethwait sacrificed both Jars to bring Krempels down to one. Still, with only a Darksteel Citadel on the table, he was going to have trouble putting up a fight. Luckily, he drew Glimmervoid off the top, and cast Pyroclasm. This killed off most of Krempels' massive elf army, although he was able to save one with a Symbiote activation. Unfazed, Krempels played Kamahl, Fist of Krosa, and won the game a turn later.

Postlethwait played Skullclamp, which was promptly Oxidized. Pyrite Spellbomb and a Disciple came out on turn two, and Krempels played Skullclamp. Postlethwait had Frogmite and Thoughtcast, and then played Welding Jar before attacking with the Disciple. Viridian Shaman targeted the Frogmite, which drew a Jar sacrifice. On end step, the Spellbomb killed the Shaman. The Frogmite and Disciple attacked to bring Krempels down to twelve, and Postlethwait played Arcbound Ravager. Krempels drew, played a Birds, and did nothing else. Postlethwait had a second Disciple, and in response, Oxidize targeted the Ravager. A Great Furnece sacrifice was added to the stack, and the Frogmite became 4/4 as the Ravager died. Krempels chump blocked it with the Birds, and played a Vine Trellis on his turn, giving it the Skullclamp.

Thoughtcast gave Postlethwait more cards, and he played a Worker before ending his turn, unwilling to attack into the Trellis and give Krempels cards. Krempels played Forgotten Ancient, and Postlethwait still had no play, waiting to draw into the right card to finish the game up. Meanwhile, Krempels was getting time to make a comeback, playing a Herald and giving it the Skullclamp to search up Viridian Shaman. It killed the Frogmite, but Krempels took two from the Disciples to go down to seven. Postlethwait drew and played Pyrite Spellbomb, and Krempels forgot to put a counter on his Ancient, getting some lighthearted boos from friends in the crowd. Krempels played Triskellion, and Postlethwait responded by dealing four total with the Spellbomb, bringing Krempels to three. The Triskellion hit play and killed the Disciples, along with the Worker. This gave Krempels a clear board advantage, and Postlethwait would essentially need to topdeck Shrapnel Blast to win. It didn't come, and Kamahl emerged to finish things. 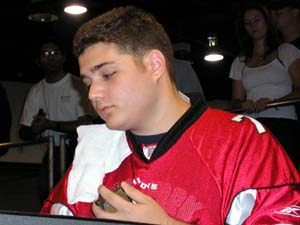 Postlethwait mulliganed his opening hand. The following six cards contained four artifact lands and two Shrapnel Blasts, which wasn't good enough to keep. He had a second turn Ravager, and Krempels destroyed it with Oxidize, after playing Birds of Paradise. Postlethwait played Frogmite and a Skullclamp, which was also destroyed with Naturalize. This had been a fairly impressive draw considering that Postlethwait went down to five, but Krempels just had all the right answers. Wood Elves, a second Birds and Wirewood Herald helped him build up, although he was still waiting for the right catalyst to pull far ahead. Naturalize targeted Seat of the Synod to draw a Jar sacrifice, and Krempels got what he needed when he played Skullclamp. It went through the Herald to get a Shaman, destroying the Seat. With plenty of one toughness creatures to cycle through, Krempels quickly drew into more and more threats and answers. Postlethwait was left with only two Darksteel Citadels for permanents, and Kamahl sent Krempels to the finals.