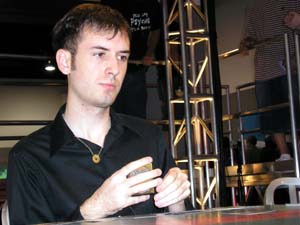 the players and judges involved in this match knew right from the start that it would be excruciating. Anyone who looked at the bracket matchups ahead of time predicted this semifinal, but board control versus board control matches tend to be anything but fun. Both players would have a lot of dead cards for this matchup, since their decks were designed to decimate a field of Affinity and Goblins, not to play the control mirror match. Fortunately the players were motivated beyond fun at this point, since the winner of this match would be assured a spot on the National team, while the loser would have to face off in the third/fourth place match for the final slot.

Ben started with a hand of two Mana Leak, Thirst for Knowledge, Pristine Angel, and land. "Draw, Go" ensued until Zoz cast a Thirst for Knowledge at the end of Bill's third turn and followed up with a Silver Knight. Solemn Simulacrum was Stead's first board-affecting play, but it died stepping in front of Zoz's Knight. Eternal Dragon from Stead took two Mana Leaks to be countered (giving you an idea of how many land were on the board at the time, in spite of the dearth of action).

Pristine Angel from Zoz was merely a catalyst for a Wrath of God from Bill, as the board was again cleared of permanents. This happened twice before Bill played his own flying beatstick in Eternal Dragon. Zoz merely shrugged, played his third Angel, and said go.

Akroma's Vengeance from Stead again cleared the board, and he followed up that play with a Simulacrum. Wrath from Zoz this time killed off an fresh Eternal Dragon and Jens, but since Bill had enough mana to buy back and play a Dragon every turn, things were clearly turning sour for the U/W player, especially since his hand contained only two lands and two Chrome Moxes.

A Decree of Justice at the end of Zoz's turn created nine soldiers for Stead, causing Ben Zoz to enter his scoop phase and it was on to game 2.

Ben's hand for game 2 was four lands, a Silver Knight, Exalted Angel, and big Pris (Pristine Angel). A turn 2 Knight plus turn 3 morph created a nice clock for Zoz, putting Stead on the defensive. Unfortunately for Ben, Bill's whole deck is designed to play defense, so his creatures looked to have a lifespan of about two turns. The Angel was unmorphed at the end of Bill's turn 4 as Zoz drew a Rewind on his turn, giving him two counters against Stead's possible removal. 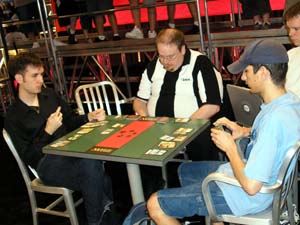 Stead hardcast Renewed Faith during Zoz's next attack and then cast Wing Shards. Zoz Leaked a copy of it, losing a Knight, but keeping his Angel in the game, and dropping Stead to eleven. Another unanswered attack from the Angel dropped Bill to seven and sent Ben's life to a soaring thirty-two. Decree of Justice for two Angels from Bill was countered, and the next Angel swing dropped Bill to three. An Akroma's Vengeance from Bill finally resolved, as he let out a long breath of air, pleased that he could live another turn. Bill then simply nodded as Zoz cast Pristine Angel, and then got himself back in the game through casting Pulse of the Fields twice, bringing his life back up to eleven.

Another Exalted Angel joined the fray for Zoz, but now Stead had six White mana in addition to two Cloudposts and two Temples of the False God, meaning he could effectively gain twelve life a turn. Mindslaver was countered with a Rewind, but Zoz appeared disappointed, as he surely wanted to use that spell to counter the Pulse.

Akroma's Vengeance from Stead cleared away a Knight, big Pris, and an Exalted from Zoz, but Ben just followed up with another Exalted Angel. Unfortunately, the Angel is not a particularly effective attacker against someone with Pulse of the Fields and access to a lot of White mana. The higher Ben's life, the more Bill could Pulse and still get it back. Stead cast an Eternal Dragon, gaining air superiority, and quickly Pulsed himself back to a 42-22 life score in favor of Zoz, and then 42-34 on the next turn.

This game now looked unlikely to end any time soon. Stead's Eternal Dragon actually attacked, dropping Zoz to a ridiculous 37. Thankfully for Ben, he finally found a Rewind to get rid of Stead's Pulse. Unfortunately, with the life totals suddenly hovering around the mid-thirties for both players, Ben now had a lot of work left to do to return Stead to any life total considered dangerous. In fact, the life totals for the game essentially looked like half time had arrived at a basketball game, with the game tied up forty all.

Stead bought back an Eternal from his graveyard, attacked, dropped two more Dragons, and still had eleven mana left over. He finally made twenty-seven soldier tokens at the end of Zoz's next turn, rapidly turning things in Stead's favor. Zoz Wrathed away Stead's team, but not before dropping to fifteen. Through Dragon recursion and due to a hugely superior mana situation, Stead eventually finished off Zoz to seal away his second game.

Play stopped for a few moments as the players were asked to move to the front table now that Craig Krempels had assured himself of a place in the finals. The cameras were resituated and play began with Ben keeping a one-land, Chrome Mox hand that also had a Silver Knight, Exalted Angel, Eternal Dragon, Wrath of God, and Renewed Faith. Ben missed a second land on turn 2 and cast Chrome Mox, imprinting the Wrath, and laying a morph. He did not find the necessary land to unmorph the Angel on turn 3, but he did cycle away a Dragon and cast a Silver Knight.

Stead, responding to unknown laughter from the crowd: "I'm gonna kill Gabe Walls after this, I swear."

The Angel unmorphed and it followed the Knight entered the red zone, dropping Stead to twelve. Wing Shards rid Bill of the Knight on the next turn, but the Angel plus mana burn dropped his life total to 9. With Rewind in hand, Zoz went searching for a second Blue mana with Thirst for Knowledge. He didn't find one, but he did draw another Silver Knight, a Pristine Angel, and a Wrath of God. His next draw yielded what he was looking for though, and he countered Stead's Shards during Bill's next attack, dropping Stead to five. Another Knight entered the game for Zoz, as he tried to assure he could kill Bill on the next swing.

Stead cast Akroma's Vengeance, even though Zoz had lands open for Mana Leak, and pumped the fist when it resolved. Ben wasn't done though, as he promptly drew and played yet another Silver Knight. With one card in hand to Bill's five, Zoz really needed to finish Bill soon or he would soon be out of the game. With that in mind, he cast his last card, Pristine Angel, and hoped that it would hold up. 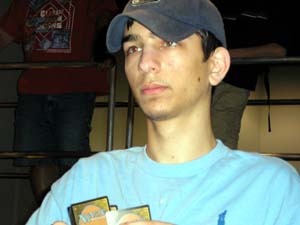 Stead did not have a Wrath or Vengeance, but he did cast an Eternal Dragon. Zoz drew his cards and attacked with Pristine Angel. Before blockers were declared, he cast Thirst for Knowledge, effectively making his Angel unblockable. Stead cycled a Renewed Faith with damage on the stack, dropping himself to one life, but staying alive for at least one more draw step. He again passed the turn, but this time cycled a Decree of Justice before blockers were declared, creating five blockers, and taking no damage. When Zoz saw that both his creatures would die, he said, "Alright, that's game," conceding the game from thirty-one life because he knew that he could no longer make it through Stead's defenses before Bill completely took over the game.