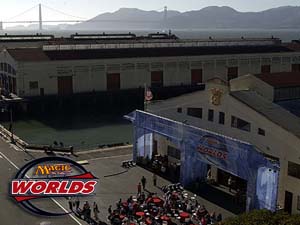 Greetings from Fisherman's Wharf in San Francisco, California! Worlds has returned to the country of Magic's origin for the final chapter in the 2004 Pro Tour season.

Three hundred and two players from around the globe had to file in past a clear tower filled with fake thousand dollar bills in order to take their seats for round one of the 2004 Magic the Gathering World Championships. The money in the tower represented the $22 million that will have been given away since the inception of the Pro Tour once this weekend concludes. More than $1,000,000 of that sum is being given away this weekend between the main event, the team competition, and the first-ever year-end payout, which makes up 60 percent of that number.

The big story this weekend - aside from the, you know, MILLION DOLLARS!!! - is the player-of-the-year race. Both Gabriel Nassif and Nicolai Herzog have an opportunity to unseat Kai Budde as Player of the year for the first time in recent memory. With the title comes free airfare and accommodations to every Pro Tour for the upcoming season. Kai has not paid for a hotel room in years and he has no intentions of starting now. He has been preparing for this event with the CMU/TOGIT crew and they have a techy little number prepared for the Standard portion -- don't count him out just yet.

Things kick off with six rounds of Standard today. Thursday is Mirrodin Block Booster draft and Friday is Block Constructed. The National teams will square off in Team Rochester draft Saturday. Sunday is the Top 8, team championships, and the announcements of the final standings in the Rookie and Player of the Year races. There will be feature matches, video coverage, deck lists, photo coverage (by the esteemed Craig Gibson), bloggery, and whatever else we can do to bring the event home to you.