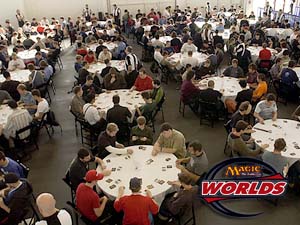 Day 2 of the 2004 Magic World Championships has begun! Of the five undefeated players from the first day, only one remains through eight rounds -- Manuel Bevand of France. Gabriel Nassif won his first two rounds on the day and is sitting where everyone else would like to be, 7-1. Player-of-the-year competitors Nicolai Herzog and Rickard Osterberg continue to trail close behind.

The American team, despite high expectations for draft day, still hasn't broached the leaderboard since a brief appearance on Day 1. With 35 points after 8 rounds, they're hovering just under the cusp. France and Belgium are tied for the lead at 48 and a full six teams are in second with 45. The race has been staying surprisingly tight for the entire tournament; not a single team has managed to pull away from the pack.

Hope may come in the form of the second draft today, giving some struggling players a chance to get rid of any nasty aftertaste from today's first draft. It's important to be in a strong position heading into tomorrow's Block rounds; after today, there will only be six more rounds of individual competition. Keep reading to for more coverage of today's crucial second draft.