of playing the same stock decks in Standard? Blue-red control offers a new option for people who aren't interested in playing the same decks of Standard. Team TOGIT worked with the Kai Budde to bring the newest deck tech to this year World Championships. 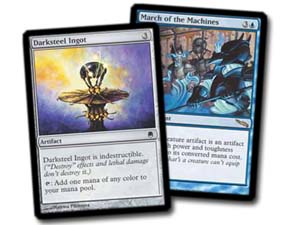 The deck uses Darksteel Ingot with March of the Machines as its only victory condition. If you can stop the four Darksteel Ingots from coming into play, the deck cannot win. To make up for the lack of victory conditions, the deck is full of removal and counters. Condescend, Mana Leak, Pyroclasm, Electrostatic Bolt and Obliterate all help buy time to set up the lethal Ingot attack.

Eleven players from this years Worlds are playing the blue-red control deck including two members of Team USA. Craig Krempels and Bill Stead both decided to play the blue-red control while Ben Zoz went with his green-white Slide. Antonino DeRosa received the deck from friend Mario Pascoli and convinced Team TOGIT to try it out.

Neither Antonino nor Mario ended up playing the deck. Gerard Fabiano got his hands on the deck and made some changes, but left the majority of the deck intact. Kai Budde worked with Team TOGIT and said the build was based on Mike Thicke's original version. Team TOGIT believed that the deck had good matchups versus Affinity and green-white Slide while struggling against Tooth and Nail.

The lack of card drawing present in the deck is one of the big changes from Thicke's version. Thicke ran three Concentrates while the Team TOGIT build uses Future Sight. Also, the Team TOGIT version runs Thirst of Knowledge. The Thirst of Knowledge is an interesting choice considering that the deck only has the Darksteel Ingots to discard for a good Thirst. Luckily, there are plenty of cards that are for specific matchups that can easily be discarded when they are unnecessary.

The control matchup can be difficult for the blue-red control deck to handle since the other control decks have cards such as Eternal Dragon to gain a mana advantage. Also, the blue-red deck needs to have Echoing Truth and Pyroclasm to deal with Decree of Justice. Obliterate is the best answer versus control.

Bill Stead commented about how much he enjoyed the sideboard plan for the deck. He liked the fact that other control decks would sideboard out their creature kill but he would be bringing in Arc-Slogger. Being able to surprise opponents with the 4/5 monster could swing matches into the blue-red deck's favor.
While Thicke piloted his blue-red deck to a 6-1-2 record in Canadian Nationals, blue-red control has seen mixed success at worlds. Craig Krempels has started 2-0 while Bill Stead is 0-2.

"We are playing the worst deck ever! The worst card in the deck is Serum Visions because when you Scry you get to look at two more cards in your deck. I'm not going to cast it or Thirst for Knowledge for the rest of the weekend," yelled Osyp Lebedowicz.

Dirk Baberowski wanted to play Elves but no one on the team brought any cards for him, so he ended up with the blue-red deck. Marco Blume said that Kai convinced him to play the deck but now he feels ashamed playing it. He said the deck doesn't look like a constructed deck at all.

The round 3 feature match between Gary Wise and Bill Stead pointed out something of a problem for the deck. How do you win the mirror match? With only the Darksteel Ingots to deal damage in the main deck, someone is bound to get decked. It looked as if Game 1 would be a quick one because Stead started out mana short but without any fast win conditions the game between the two dragged on.

Wise had drawn so many cards in the early game and had beatdown with Darksteel Ingots to put Stead at 2 life. Wise didn't seem to be able to win before his deck expired but he had one last trick up his sleeve. Unlike his previous experience with Shock, this time Wise chose the correct target by killing Stead in what looked like a losing situation

Lebedowicz took his first game versus Nicolai Herzog. Herzog's white-blue control couldn't stop Lebedowicz after he Obliterated with a Future Sight in play.

While Day 1 has barely gotten underway, the results of the deck are mixed. Considering that the deck is a fairly new entry into the Standard metagame, with a few more adjustments it could prove to be a viable answer to the format's proven winners.