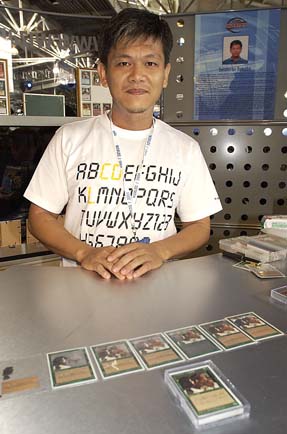 World Championships of Magic is always an incredible experience for spectators, and not just because of the high-powered Magic being decided across the top tables. As with so many other premier events, Worlds tends to have other great things going on in addition to the main event. This year, perhaps the most buzz is about artist Seishiro Ookubo.

Invited to the event as a special guest of Wizards of the Coast, Ookubo is getting a lot of attention because of his unique form of artwork. He starts with six identical copies of a card, and then systematically slices out various pieces of the artwork from each. He uses these pieces to add physical layers to the base card's art, giving it a three-dimensional feel and detail that reaches right up out of the card. Each final card takes him two or three hours on average, though some have taken much longer. As a special treat, Ookubo is working at his booth throughout the weekend crafting more 3-D cards while the fascinated spectators get to watch the process. 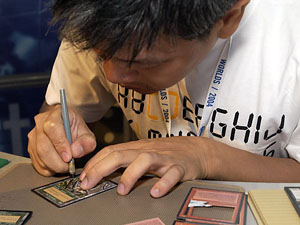 His display booth contains an impressive collection of these cards, but when asked about his favorite, he proudly presents the display case containing Red Elemental Blast and Blue Elemental Blast. This shot from the side gives a good idea of how thick the final version is. 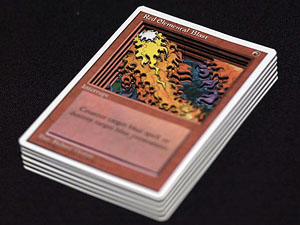 A much closer shot showing the progressive physical layering that builds up the 3-D effect. 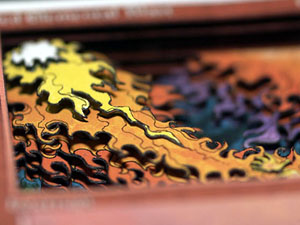 Even with a straight-on view through the web, the 3-D effect still manages to come through. In person, the overall effect is startlingly powerful. 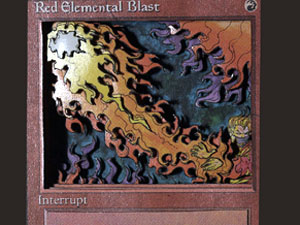 Perhaps the most amazing part of the story is that, despite all the attention Ookubo's work has been getting, he's never sold a single piece. According to Wizards of the Coast's Organized Play Manager for Japan, Ron Foster (pictured here translating for our web video coverage team), the artist shows up at events in Japan but only trades them away rather than selling them. In fact, he doesn't even set a value when trading. He simply asks admirers to trade whatever they think the piece is worth to them. However much they value it as, is what he thinks is fair. 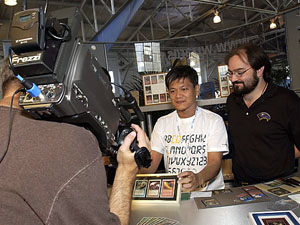 However, for Worlds this year, Ookubo has donated several pieces to the event's charity auction. The donated collection includes two versions of Craw Wurm, a card by each of the five artists present at this year's Worlds, and also a five-card cycle of the mana producing Myr. 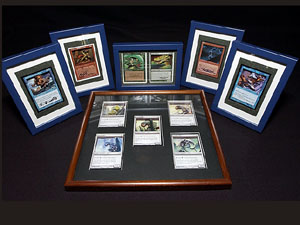 Ookubo normally focuses on common cards, but he has done three rares by special request. Those cards are Necropotence, Foster, and Rune of Protection: Lands. (He completed the entire Rune of Protection cycle as a special gift to artist Scott M. Fischer, who did the artwork for those cards.) When asked if he'd ever had the chance to work on any of Magic's highest priced cards, he only smiled and said "no, not yet." As amazing as these are even with just commons, one can only imagine what the impact would be with something like Black Lotus, particularly when you realize it would take six Black Lotuses to make one of these!

And lastly, a quote in his own (translated) words: "It's been over eight years since I started making these cards, and there are still a lot of cards that I want to make into 3-D art, while at the same time Wizards of the Coast keeps making more. I may never catch up!"