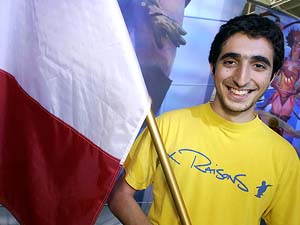 there is one player in the world who has been consistently proving himself in constructed events in recent years, it is Gabriel Nassif.

The Frenchman first started his run at Pro Tour-Venice in 2003, where he played an Onslaught block Goblins deck to a fifth-place finish. At the next constructed event (Pro Tour-New Orleans), he piloted "The Clock" all the way to the finals before falling to Rickard Österberg and his Tinker deck. Then in Kobe, he made it three in a row with another finals appearance bearing a deck of his own design. The central card? A certain seven-mana sorcery that almost all the other players had dismissed: Tooth and Nail.

Gab first started playing during Ice Age, giving him about eight years of experience under his belt. (I would say under his Yellow Hat, but unfortunately he stopped wearing his trademark headgear a few tournaments ago. It was last spotted on Neil Reeves.) His first Pro Tour was Chicago in 2000, or as he put it, "the one that Kai won." He finished a respectable 45th.

For this event, he admitted that he hadn't tested as much as he would have liked, but he still felt confident in his deck choice. He didn't want to play Affinity because he wanted to avoid the mirror matches. So he threw together a list for blue-white control, tested some games on Magic Online, and ended up with the following deck:

The fact that Nassif is playing only two or three copies of so many cards is a testament to the number of viable cards for the deck. Notable cards that he passed up include Wing Shards and Pulse of the Fields, but he chose to weaken his deck against Goblins in order to make it stronger against control. He also eschewed Concentrate in favor of the instant speed card selection of Thirst for Knowledge.

He's not sure if blue-white was the best choice for the tournament, but he felt like he had the best list possible for the archetype.

"Everything in this format is like 50/50 against everything else," he added.

In that case, it seems like the play is to pick the deck you're comfortable with. That's exactly what he did.
Nassif is hoping to do well at this tournament for a variety of reasons. He's a member of the strong French national team, so each win he pulls out counts not only for himself but for his country as well. On top of that, he is currently tied for second place in the Player-of-the-Year race with fellow competitor Rickard Österberg. Nine points ahead of them is Nicolai Herzog. When the winner of Worlds receives 32 Pro Points, any of these players could take the title. Nassif also has the potential to receive up to six points from his spot on his national team. With the Player of the Year receiving free trips to all the Pro Tours next year, this is a race to watch.

I followed him around today and tried to watch at least a glimpse of each match. Here's what I saw: 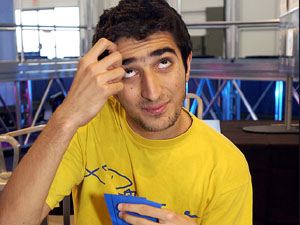 Round 1 vs. Jeff Cunningham (Urzatron Tooth and Nail)

In the first game, Jeff finished the Urzatron on schedule -- turn four after pausing for a Forest and Vine Trellis -- and then summoned a Platinum Angel with three mana up. After it resolved he felt confident enough to try for an entwined Tooth and Nail, again with three mana, but it ran into double Mana Leak. Nassif then Wrathed and cleared the board. A few turns later, he cycled a Decree for seven soldiers. With the help of two Rewinds and an Annul, they were able to trundle across for lethal damage.

Nassif sided in three Pacifisms and three Stifles for Game 2, taking out his Wraths, a Vengeance, and an Annul. He stared at a hand of Stifle, Exalted Angel, Eternal Dragon, Decree of Justice, Thirst for Knowledge, Flooded Strand, and Rewind for awhile before deciding to keep it, and was rewarded when he ripped Cloudpost and a second Flooded Strand off the top. He was still in trouble, though, as Cunningham had turn two Xantid Swarm off of Talisman of Unity and then turn three Urzatron. The next few turns consisted of Cunningham using Reap and Sow to keep Gab from doing anything useful and then Tooth and Nailed for Sundering Titan and Platinum Angel. That was more than enough.

In game 3, Cunningham had Xantid Swarm on the first turn and followed it with Sylvan Scrying for an Urza land. His next play was Solemn Simulacrum, with his land drop showing that he had drawn a second Urza's Mine instead of the Power Plant he needed. Gabriel answered with a morphed Angel and a crucial Pacifism on the Swarm. Cunningham then ran Oblivion Stone into a counter and followed with Eternal Witness for his Scrying. Gab made six Soldier tokens on end step and then bashed with all of them plus an unmorphed Exalted Angel, but unfortunately he was out of countermagic. Cunningham capitalized with a second Xantid Swarm and a Sundering Titan, and on his next turn the Swarm cleared the way for Tooth and Nail with the entwine. Gab could only shake his head as he stared at the Rewind he had just drawn.

Österberg took an early lead as the only one of the three to win his match.

Afterward, when asked if he should have kept in some Wrath of Gods, Nassif seemed uncertain.

"Maybe I should have kept in one or two, but I don't know what I would have taken out," he wondered. "You can't really take out any of the countermagic, but maybe I could have switched a Mana Leak and a Condescend for two Wraths. But he just had too many Swarms, and he only had three in his deck."

It did seem like the matchup should be better than average for the blue-white deck, as Tooth and Nail doesn't have that many threats that the control deck is concerned about.

Round 2 vs. Marco Pancini (blue-white with Wing Shards and Concentrate)

Nassif had a decisive advantage in these games, as the Wing Shards were mediocre and the Concentrates meant that Pancini had to tap out on his own turn. Pancini made the best of it, at one point taking out seven Soldiers in a turn by baiting out a counterspell (with Beacon of Immortality) and then casting back to back Wing Shards. Still, he was often using multiple cards to deal with one of Nassif's, and he fell behind eventually. Game 2 unfolded similarly with Nassif eventually forcing through enough damage with his Soldiers and Eternal Dragons.

After the game Nicolai wandered over, saying, "You win? I lost."

Gab nodded and added, rubbing his hands together evilly, "Rickard's 2-0…"

Nicolai shook his head. "I have a bad feeling about this." 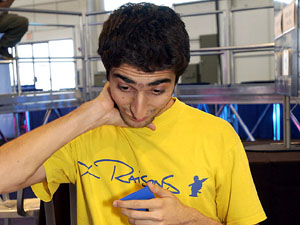 I arrived at the Gabriel mirror match after Nassif was already up a game. Aziz started with an early Headhunter and Ravenous Rats. A Purge dealt with the morph creature, but not before Nassif had lost a Rewind. A second Headhunter forced a Wrath of God; Aziz followed with a Solemn Simulacrum. Nassif answered with a morphed Exalted Angel and the board was killed by Barter in Blood.

Nassif returned an Eternal Dragon, played a land and shipped the turn with one card in hand. Aziz added Withered Wretch and then Chittering Rats, giving Nassif the choice of cycling the Dragon for a plains or putting it back on top of his deck. He chose the latter and cast it, then another a couple turns later.

The Dragon moved onto the offensive and Aziz was at 5 life when he pulled Death Cloud off the top. He cast it for two, but missed an opportunity to activate his Blinkmoth Nexus in response, thereby saving his Withered Wretch and dealing with the Eternal Dragons permanently. Nassif punished him for it and the Dragons eventually took the match.

Österberg took his first loss this round while Nicolai managed to pull out his first victory.

Round 4 vs. Richard Grace (Affinity)

When asked about the Affinity matchup, Nassif seemed unsure.

"It tested well, but I don't know if it was a good version. I think it's about even."

His opponent led off with Arcbound Worker, Scale of Chiss-Goria and Frogmite, but he was able to Thirst into a Wrath of God before he took too much damage. Arcbound Ravager was then matched by Exalted Angel. They traded blows, then Nassif added another Angel and Grace summoned Enforcer and a second Ravager, plus a Chromatic Sphere to enable Disciple on the next turn.

Gab swung the life totals by 16, making the life totals 23 to 8, and passed the turn just hoping he wouldn't die. He had a key Annul for Cranial Plating and despite the Ravagers and the Disciple Richard could only deal 20. He took Nassif to 3 and the Angels took it home.

In game 2, both players had early Relic Barriers and Grace again had a Ravager and Worker. Eventually, with Nassif at 14, he attacked with both ground creatures and Blinkmoth Nexus. When Nassif blocked with two soldier tokens, he ate a Chromatic Sphere and a Darksteel Citadel and moved the three counters to the Nexus. Purge from Nassif, with three up for Mana Leak, crushed his dreams. When Gab found Vengeance a few turns later, it was over.

All three players won their rounds, keeping the race fairly even.

Brian David-Marshall covered this match in his 5:10 p.m. entry in his Day 1 coverage blog.

Again, all three players proved why they deserve a shot in the Player-of-the-Year race with a wins in this round.

When I arrived at the match, Nassif was already up a game and Gomersall had placed Myr Incubator on the stack with only one mana available. Well, by stack I mean hovering above the graveyard, because he fully expected it to be met with countermagic. Gab, with only four lands in play, cringed and said, "in response," then cycled Decree of Justice for zero with an Island showing, looking for Annul. No dice. 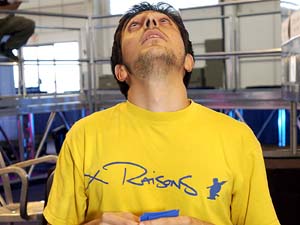 On Gomersall's next upkeep Gab targeted the Incubator with Relic Barrier and it was activated in response, dumping 24 1/1 Myr tokens into play and leaving Gomersall with Seat of the Synod and Darksteel Citadel available. He was clearly representing Mana Leak, but Gab was one step ahead of him. He tapped the Seat of the Synod with his now untapped Relic Barrier, and then played Temple of the False God and tossed Akroma's Vengeance on the table. Match to Nassif.

Both Nassif and Herzog finished the day with a win, while Österberg pulled out a draw. Despite his 0-2 start, Nicolai is right in the thick of it, and it's anybody's tournament heading into Thursday's limited rounds.