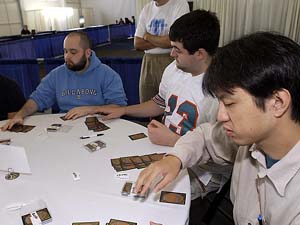 Brockafellers ran over the competition during Pro Tour-Boston. While they didn't have as much success in Seattle, two of the Brockafellers were in good position to make a run to become World Champion going into the first draft of the day.

William "Huey" Jensen and Brock Parker both played Goblins during the Standard portion of Worlds to a 5-1 record. Starting the Limited portion, they both ended up in the same pod sitting right next to each other. Even though they are drafting individually for this event, whenever teammates sit next to one another it is a large advantage for both players. Pro players often refer to this situation as the "Fix." Players aren't allowed to communicate during the draft, but being best friends means that you often know how the other person will draft.

When asked if he and Parker had discussed their strategies beforehand, Jensen said that they didn't. I was skeptical at first, but after seeing how their drafts turned out it became obvious that he had been telling the truth.

The draft setup had Parker passing to Jensen in the first and third pack while Jensen would pass to Parker in the Darksteel booster. Downstream from Huey was Japanese National Champion Tsuyoshi Fujita and next to Fujita sat Kamiel Cornelissen, winner of Pro Tour-Seattle. At Pro Tour-Amsterdam, Kamiel drafted red-green decks all day long but that format didn't include the colorful Fifth Dawn. The rest of the table included Lars Dam, Jan Skampa, Katsuhiro Mori, and Christoph Holzl.

The players drafted in the following order:

Jensen and Parker both started off along the same path each taking an artifact card. Jensen grabbed Icy Manipulator while Parker picked a Myr Enforcer. Neither one went into a heavy color commitment for the entire first pack. Parker got a Bonesplitter, Silver Myr, Flayed Nim and Raise the Alarm from packs without much depth. Jensen followed a similar path but ended up with a few more black cards like Moriok Scavenger and double Nightmare Lash.

Jensen wasn't able to take enough black to push Fujita out of the color. Fujita had opened a first-pick Terror followed by a second choice Spikeshot. Jensen had taken the Icy Manipulator over the Spikeshot and had set Fujita firmly into red black. Fujita picked up a Consume Spirit as well.

Darksteel is where the black players receive all of their power cards and Fujita was in line for some strong packs. Cornelissen had gone white green splash red in the first pack opening a Solemn Simulacrum and being passed a Luminous Angel that Fujita and Jensen had passed for the Spikeshot Goblin and Icy Manipulator, respectively. The Mirrodin pack that Jensen opened was powerful enough to set the tone for the three pros' draft.

Fujita did indeed receive strong black cards receiving two Essence Drains, Grimclaw Bats and took a Savage Beating over a Chittering Rats. Jensen suffered during Darksteel. He kept seeing lots of good blue cards like Hoverguard Observer and Vedalken Engineer but instead passed them along. Parker was looking for a second color after being starved out of black so he took the signals and started drafting blue.

In the third pack things continued to go well for Parker while his teammate Jensen continued to suffer. Parker grabbed Qumulox, two Thought Couriers and a Condescend out of Fifth Dawn. Jensen didn't find much in Fifth Dawn beside two Cranial Platings. Fujita finally felt the effects of drafting black behind a black drafter receiving very little to help his deck at all except a third pick Granulate.

During deckbuilding, Fujita looked as if he had come out with the best deck. Even without much contribution from Darksteel he had managed to assemble a good black red deck with a good combination of removal and creatures. Parker deck ended up solid for the first 18 cards but lacked the depth that limited decks strive for. Instead he ended up filling out his deck with such cards as Ur-Golem's Eye, Forge Armor, Heartseeker, and Arcbound Lancer.

Cornelissen and Mori each ended up with solid white-based decks. Mori played white blue while Cornelissen settled in white-green with a splash of red. Mori benefited from the lack of white drafters getting cards like Blinding Beam and Test of Faith. A look at Cornelissen's decklist shows that he was playing one Aether Vial as he couldn't find another quality card.

Jensen commented about his deck that he would need to have some luck in order to do well. He felt his deck was okay but not anything special. Parker laughed about some of the cards to make his deck, including the fabulous Dross Scorpion.

The feature match between Cornelissen and Fujita saw Cornelissen playing a turn-one Aether Vial. Thanks to the Vial, over the course of the game he would play out Tanglewalker, two Tel-Jilad Exiles, and a Tangle Spider all without any green mana. Then the Aether Vial shot a Luminious Angel into play. This proved to be too much for the removal-based deck of Fujita, and Cornelissen would go on to take the match. 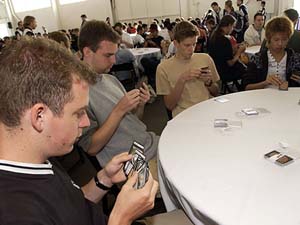 In the first round, Jensen found himself overwhelmed by the forces of Lars Dam and Crystal Shard. Jensen had out lots of equipment but Lars still got past Jensen's creature-light deck. Parker took down Mori using Heartseeker to kill all of the blue and white creatures of Mori while sitting on just 1 life point.

After the second round, Jensen had just lost again -- this time to Fujita -- and I found him bemoaning his luck. He said that he felt his deck was pretty mediocre but with a little luck he would be able to win with it. Instead he kept having either land-heavy or land-light draws -- drawing three land one game and 13 the next.

Jensen managed a win his final match with his black-red deck, but still saw how drafting the same colors as your neighbors can cripple your chances. Parker and Cornelissen were both 2-0 heading into their feature match, from which Kamiel emerged victorious. Read more about their showdown in Gary Wise's feature match article. Fujita and Mori each finished 1-2.

The player who can do the most with the cards they end up with can make the difference between 3-0 and 0-3, and both Parker and Kamiel showed how a little creativity can go a long way in pro-level drafts.