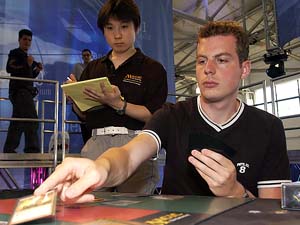 by yourself at the top of the standings can be a wonderful feeling. Just ask Manuel Bevand, the last undefeated player at Worlds heading into Thursday's second draft.

The competition isn't far behind but they certainly are talented. French countrymen Antoine Ruel and Gabriel Nassif are both 8-1 and also at Table 1. Joining them is Aeo Paquette, a Top-8 finisher from Pro Tour-Amsterdam. Canada would have loved to have Paquette's 24 points as part of their total as their current team, Mike Thicke, Jeff Cunningham, and Jingpeng Zhang are sitting in 20th place in the team standings.

The final big name at the top table is Kamiel Cornelissen, who is coming off of a 3-0 performance with a green-white-red deck. He is sitting downstream from Ruel and Bevand so following how he reacts to the draft should be interesting.

Rounding out the draft table are Sebastian Gulinski of Poland, Andrei Hayrynen of Finland, and Bruno Carvalho of Switzerland. All three players are part of their National teams. Gulinski's 24 points has helped Poland stay tied with France in first place after nine rounds. Finland has 48 points overall, meaning that Hayrynen has contributed half of his team's points. Finland is locked in sixth with Denmark and Japan.

The order of the draft had Ruel feeding Bevand who feeds Cornelissen to Paquette in both Mirrodin and Fifth Dawn. In Darksteel, Paquette will get first crack before the other three players. Sitting on the end of the line of quality players is a better situation than being squeezed in the middle. The end seats will often pick up a quality card or two that the less experienced drafters have let slip through the cracks.

Because of this, Nassif has the best position in the draft. On either side of him are the less-experienced National team members. Nassif's strong position should help his chances in the Player-of-the-Year race. A strong finish to Day 2 would leave Nassif in great shape to make the coveted Day 5 of Worlds.

Bevand's good fortune continued as he opened Icy Manipulator. Ruel took a first-pick Spikeshot Goblin while Paquette passed a one that would end up in Nassif's deck, taking a Duplicant instead. Ruel, Bevand and Kamiel all made an early stab at white, each picking up white fliers. Inevitably, though, Bevand was forced to give up white as he didn't see enough of it to reasonably play the color. Instead Bevand took one of his favorite cards from the format, Vedalken Archmage -- going into blue for the powerful card drawer. Ruel had added Arrest to his card pool but would later go on to describe the rest of his picks as "Blech, blech, blech. I hate all of these cards."
After the draft Bevand would go on to say that he didn't plan on drafting blue-green but that is what fell into his lap. Oxidize and Deconstruct, along with Fangren Pathcutter, gave him enough green to fill out his deck.

Kamiel added blue to his white to shape his deck into a solid white-blue deck. It was filled with equipment to help his multiple Skyhunter Cubs and Auriok Glaivemaster. He committed to blue when he took a Neurok Spy over Barter in Blood. This set Paquette into black.

Benefiting from the all of the white drafting going on down the line was Paquette. After his first-pick Duplicant, he took two Aether Spellbombs to combo with the Shapeshifter and Barter in Blood. He continued to draft a strong deck with lots of black Mirrodin and Fifth Dawn coming through the three Europeans.

After the draft, Paquette commented that his deck was "retarded." While all of the other players in the draft pod were hoping that the card pool of the draft was weak, Paquette appeared to be ready to conquer. Usually such confidence can be found in experienced Pro Tour veterans but for Paquette this is only his fourth major event. A Top 2 finish for Paquette would probably win him Rookie-of-the-Year honors.

Not only did Antoine Ruel not like his deck, but also his deck didn't like him. In his first match versus Paquette, Ruel drew too many land both games. Paquette's draw really punished Ruel in any case. Arcbound Worker, Blind Creeper, Neurok Prodigy and Spire Golem all poured onto the table to put the Frenchman out of his misery quickly.

Nassif took down Bevand in three games. In the deciding game 3, Nassif used Summoning Station and Viridian Longbow to wipe out Bevand's team and replace them with Pincher tokens. Bevand had a Ferocious Charge in hand but fell one turn short of finishing off Nassif in Round 7.

Round 8 saw Nassif fighting Cornelissen for top spot in the standings. Check out the blog for more details about this match.

Paquette had drafted white-red to 3-0 his first pod but his blue-black deck served him well versus Bevand. Bevand did dominate game 2 with Icy Manipulator, Viridian Longbow and Qumulox, but game 3 was all Paquette. Bevand never could find a Forest to Oxidize as once again Paquette came out of the gates to strongly for his opponent. He even had the Vedalken Mastermind-Duplicant combo all set up but never needed to use it.

Only Paquette had diverged greatly from his draft strategy from the first draft. Nassif drafted green-white-red in the second draft while in the first he had a more focused monogreen strategy. Nassif lost to Ruel in the final round, leaving him at 4-2 on the day.

Ruel, who finished 10-2, drafted white-red the first draft but added green into the mix this time. Ruel seemed exceptionally shocked after he had gone 2-1 with his second deck, giving an expression of disbelief after the win over Nassif. Bevand's unusual blue-green strategy didn't pay off as he finished 1-2 with the deck. Of course his fall from the top wasn't as far as Sasha Zorc's -- he had been 6-0 after Day 1 but after his 1-5 performance on Day 2 his record is a less than stellar 7-5.

Cornelissen played white in both drafts, green-white-red in the first and then white-blue in the second. The pros seemed to have a set strategy that they intended to follow, but were flexible enough to change when necessary. 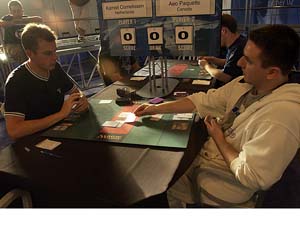 In Cornelissen's last match, he faced Paquette to see who would finish 3-0 and on top of the standings after Day 2. The first game was all Paquette. He killed Cornelissen's only two creatures with two Echoing Decays before finishing him off with Pewter Golem and Fleshgrafter. Game 2 saw Cornelissen swinging in with a Skyhunter Cub with Fireshrieker only to be held off by the Mastermind and a little Grimclaw Bats. Eventually, Cornelissen accumulated too many fliers and finished off Paquette to force a deciding Game 3.

Game 3 saw Cornelissen having colored mana problems early while Paquette got out to a fast start. Cornelissen did eventually find white mana allowing him to play out Skyhunter Skirmisher and then put Cranial Plating on it. The Skirmisher hit Paquette for 14 in one turn. The next turn the Skirmisher and a Wizard Replica finished off Paquette, leaving Kamiel the king of this draft pod.