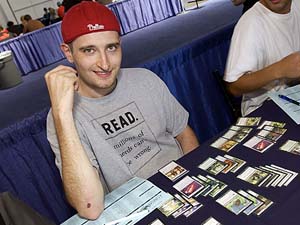 this, the 10th anniversary of the Magic: the Gathering World Championships, the past isn't letting go too quickly. The game's been changing fast, moving toward the future in a series of artistic and strategic changes. We've seen the old guard peel off the Tour as the fresh blood, invigorated by 50-hour online play weeks and the need for cash and glory, has started taking over. Kai's 2-4. Jens, Walamies and Darwin are gone. It seems that now, as we celebrate the past, the future would be now -- were it not for one man.

Jon Finkel has won a Pro Tour, a World Championship and an Invitational. Eleven times he's made Pro Tour Top 8s, a record that stands even through the era of "ze Kai." He's second all time in money winnings and Pro Tour points, and after a 4-2 performance on day 1, he's running Limited, as he's done so many times. He won his first draft and now stands poised to make a run at a third World Championships Top 8.

Finkel has been Magic's poster boy since before most of you could spell "poster." He was the Player of the Year in 1998, the year he won Pro Tour-New York. Back then, he was a pure gamer: Magic was what he did. Since then, he's grown up. School, parties, work, all these things take precedence. Magic is something to be done on occasional journeys to foreign locales while visiting friends from all over the world. He plays games for a living, making better than good money, and the computer mind from which his poetic game sprung remains sharp, steady.

"I haven't drafted the set much," Finkel said as he built his second draft deck. "One Grand Prix, one Pro Tour and three online drafts last night."

Most of us dream of being good enough to merely make it to Worlds, or short of that, to start winning drafts with regularity after eons of practice. Finkel does it effortlessly, with the wave of a hand and a tip of the cap.

To paraphrase Mathew McConaughey, "the thing I like about these Magic players, I get older, they all stay the same age." As we as a group age and take on inevitable responsibilities, Magic's individuals inevitably fade away to be replaced by the new blood, but Finkel's still here. He's not gaming like he used to and he's here for the times, where it used to be for the money, but maybe that's a good thing: Magic's a game. All you need is a deck and a friend, and in the heat of battle, we often forget that. If Jon can keep winning, all the way through Sunday, on that level he could take us full circle. What better way to celebrate our beginnings.