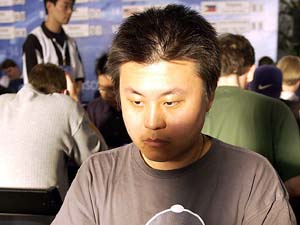 , the little story touches a nerve. Magic, being a social activity, is a breeding ground for friendships and the tales such relationships generate, and Jingpeng Zhang's story is a perfect example of that.

A 26-year-old computer programmer, Zhang grew up in Gang Zhou, the largest city in southern China. After a 16th-place finish at the 2001 Chinese Nationals, Zhang decided it was time to move. His aspirations were larger than his homeland situation could meet, and with thoughts of eventually moving to the United States, he decided attaining Canadian citizenship would be a good step in that direction. Making the hardest decision of his life, he picked up and moved his belongings, his world, and his life to North America.

Lost in the move was his past -- his job, his home, and his friendships. While officially an intellectual sport in China, Magic is unlike other sanctioned activities in that it is available as competition for the common man. Zhang took up the game during Mercadian Masques block. Playing regularly in tournaments in his homeland, he became friends with two of its strongest competitors: Dong Zhong and Zang Shunu. He hadn't seen them since the move.

Shunu defeated Zhong in the finals of Chinese National championships, just a few weeks before Zhang won his new home's national title. Heading to Worlds as the Canadian National Champion, Jingpeng was re-united with his long-lost friends.

"We were very proud," said Zhong through a translator. "It's great to see him again."

The hope is that all three will be making their way to future Pro Tours, but they've decided to make up for lost time in the interim. The friends are staying in the States for an extra week and touring together, exploring their lost good times as much as the countryside.

After Day 2, both teams are sitting on the leaderboard. China is in 10th place with 63 points, and Canada sits 20th with 57. But these three friends know that regardless of the final standing, they'll be taking back something lost in their time apart: their friendship with one another.