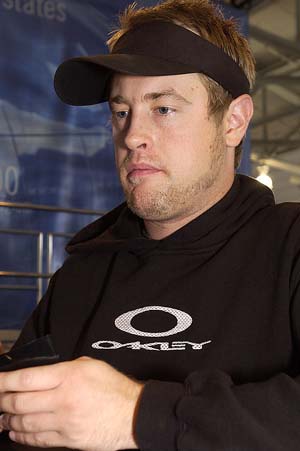 relatively quiet pro from Norway, Rickard Österberg has made noise with his play in 2003-2004 -- although rumor has it he and his teammates enjoy having a good time on their travels.

Though he didn't become a household name until October when his team finished second at Pro Tour-Boston, Rickard has been on the Pro Tour for years. He followed up the Boston finish with a win at Pro Tour-New Orleans, officially putting his name on the map and giving him a big leg up in the early Player-of-the-Year standings. Another solid finish in Kobe and attendance at the rest of the Pro Tours put him in spitting distance of the leader in the Player-of-the-Year race.

Coming into this week, Österberg sat snugly in a second place tie with Gabriel Nassif in the Player of the Year race at 71 points, just nine points behind leader Nicolai Herzog. This all translates to saying that the Player-of-the-Year race was anything but settled going into the start of Worlds. Coming into Friday, Österberg had 25 points -- seven more than Nicolai, but two fewer than Gabriel Nassif. He would need to make the Top 8 in order to earn enough.

This is convenient for our coverage plan, since we're following Rickard on Friday, and for the first time in years this year's Player of the Year is still up for grabs going into the final day of Swiss.

Rickard went 4-1-1 on the Standard day, playing the blue-white Control deck he used to place fourth at Norwegian Nationals. He then went 4-2 on draft day, meaning he needs a strong finish in order to make the Top 8 and displace Herzog from his lofty perch. For the Block Constructed format, Rickard chose to play a nearly identical deck to his Pro Tour-Kobe deck where he finished 19th. I sat down with him before the day began to find out a little more about how his weekend had gone thus far.

MTG: Hello, Rickard. We're covering you all day today for the Player of the Year race.

Rickard: Oh God, do you really have to? I only got 1.5 hours of sleep last night, I'm still jetlagged and I didn't even have a deck to play.

MTG: How did you end up with this one? 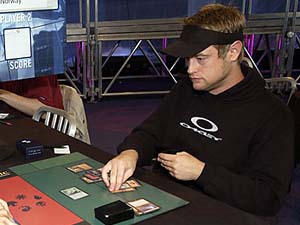 Rickard: It was the only deck I had. I removed the Flamebreaks from the maindeck and I modified the sideboard a little bit, but it's basically the same deck. I think it I absolutely awful.

MTG: How much testing did you do for this format?

Rickard: I have played almost no Block whatsoever since Kobe until last night. Then I couldn't sleep because I was nervous and my sleep schedule is all messed up, so I've had a total of 4.5 hours of sleep in the last two days. The reason for this is that I've just playing less Magic this year, which gives me a bit less stress, and yet I've been turning in good results.

MTG: What do you think of the year you've had thus far?

Rickard: It's been a great year for me playing Magic at the Pro Tours -- I've had very good finishes over the year. I almost quit Magic a year ago, but then I got second at the team PT, and then the win in New Orleans, thereby guaranteeing I would keep playing.

MTG: So you're going to keep playing then? Do you enjoy the travel?

Rickard: The traveling is a bit much these days because I've been on the Tour forever, but I've definitely enjoyed myself. Unfortunately it takes a lot of time, so it's hard to have a good job as a pro. I mostly play poker as my job these days. I didn't really go to any Grand Prix this whole season . . . it was too much traveling and I wasn't taking the race very seriously, a fact I somewhat regret now because I got so close to Nicolai. To be honest, I didn't even have Top 8 in mind coming into this tournament either, and I'm surprised I did so well on the first two days. That explains my lack of preparation a bit. We'll see how today goes though. My deck is possibly one of the worst at the tournament -- I just want to make that clear to everyone. I know how bad this deck actually is, but circumstances and laziness worked against me finding something better.

Here's a look at how Rickard fared in Friday's hunt.

Rickard started off with a relatively easy matchup for his Big Red deck, which features maindeck Furnace Dragons, as well as Talismans and artifact lands to power them out. Yuri was running blue-green Control, a deck that can dominate Affinity, but one that tends to have problems with Big Red. 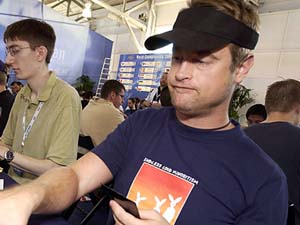 The players took their time in the match, but Rickard was always in control. In spite of having his Arc-Slogger bounced twice, Yuri had trouble finding a Condescend to keep it off the board, and when he did, Rickard simply had another. The second game was similar to the first, though Yuri got some beats in with Tel-Jilad Chosens and Troll Ascetic. Rickard managed to stabilize on turn five with Solemn Simulacrum and Arc-Slogger before powering out another Furnace Dragon, starting his day with a win.

Gabriel Nassif also won his match this round, so Rickard was unable to pick up any ground on the French Constructed master.

Round 14 vs. Sebastian Zink

The pairings for this round placed a member of the German National team -- and twin brother of World Champion Daniel Zink -- in Rickard's path. Unfortunately for Rickard, Sebastian and his Affinity deck proved to be more of a road block than a speed bump.

In Game 1, Sebastian blew right through Rickard's defenses with two Arcbound Ravagers and a Disciple, resulting in a quick and painful death for the Norwegian. Game 2 wasn't any better for Rickard, as he was stuck on two land for the majority of the game, a very unhealthy place to be when playing against an Affinity deck.

"That match was very frustrating because he got the usual strong draw in Game 1 and rolled over me, and then my deck died in game 2. The matchup against Affinity used to be very good… I'm not sure if that has changed or not."

Unfortunately for Rickard, the big race came to a grinding halt for him this round. In spite of playing three early removal spells, Kato continued to draw gas, eventually killing Rickard with two Cranial Platings plus a host of creatures. After the match was over, Rickard turned to me to show me the three Furnace Dragons he held in his hand, and pointed at the board, indicating he was one mana short of casting them.

If anything, Game 2 was actually a more harsh loss. Rickard got stuck on two lands and two Talismans for some time, but Kato was unable to capitalize quickly, as he too was both mana screwed and color screwed, and could only beat down with a pair of Arcbound Workers. Rickard managed to stabilize with a Damping Matrix, a Solemn Simulacrum, and an Arc-Slogger, but not before being reduced to 5 life. At one point, Kato asked for a count in Rickard's library, not realizing that Damping Matrix shut down the Norwegian's ability to wipe out Kato's board so that Rickard wouldn't die to a counterattack.

As the standoff continued, Kato drew a Shrapnel Blast with a Chromatic Sphere in a play and another in his hand. The audience behind him waited for Kato to kill Rickard, but Kato did nothing, as Rickard played another Arc-Slogger and began to bring the beats. The turn before Rickard could kill him, Kato drew a Great Furnace and breathed a huge sigh of relief, Shrapnel Blasting himself to victory. Rickard pointed to the Sphere in play and then pointed to Shrapnel Blast, and Kato realized his huge oversight, slapping his forehead in disbelief. 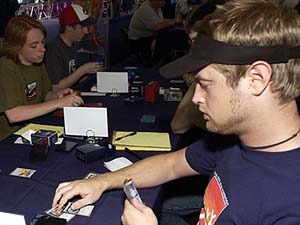 At one point, in this match Rickard actually nodded off while waiting for Kato to do some combat math before deciding whether or not to attack. It was definitely poor deck choice and mana screw that did him in Friday, much more than poor play decisions.

Rickard's loss in round 15 officially put him out of Top 8 contention, ending his chance at earning the Player-of-the-Year title, even though he would go on to beat Adam Horvath in round 16. Gabriel Nassif, on the other hand, continued to win and had guaranteed himself a slot in the Top 8 after round 17.