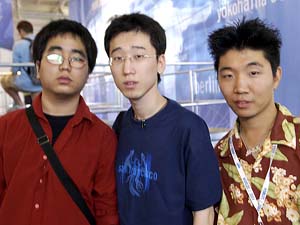 of the biggest stories emerging from this year's World Championships has been the national team competition. Each country that holds a Nationals event gets to send three players, who compete as a team throughout the week. They play as individuals the first three days, but their scores are added together to get their overall team score. On the fourth day of competition all of the three-person national teams do a series of four different team Rochester drafts. At the end of that the two teams with the most total points face off in the finals on Sunday for the title.

The big story this year is the impressive number of breakout performances for teams that have not fared as well in previous Worlds events. While many of the countries listed on the leaderboard have drawn attention this year, perhaps the most remarkable has been South Korea. Last year the South Koreans finished 21st at Worlds, and the year before that they were 26th. This year, however, the South Korea team has consistently held a position at or near the Top 3, including some rounds at the top of the standings and several above the most heavily favored team, the French.

I had a chance to sit down and speak with them during the middle of Day 3. This year's national team is made up of Won Suk Choi, Kyoung Geun Nam, and Sang-Ryeal Lee. Fortunately for me, Choi (who spent some time living in Los Angeles to attend school) speaks excellent English, so he was able to translate. When asked about their amazing performance so far, he smiled broadly. "We are surprised too!"

I asked him what was different this time around and he felt that a big change was Magic Online. All three of this year's national team play quite a bit online, particularly booster draft, so he felt like they came in much more practiced than may have been the case of previous teams. He said that Lee in particular practices on Magic Online "all the time, always."

When Choi translated to Lee what he'd said, Lee broke out in a big grin and nodded vigorously. Lee continued, "these other two, they play so much. And Lee, that guy, he never stops. The only time he isn't playing Magic Online is when he has to sleep or go to the bathroom. Even eating he plays!"

This time both of the other players chuckled at Lee's translation.

As we talked about preparation they got into specifics from their matches. They all felt that they'd been fortunate on matchups and just generally lucky Day 1, but they also felt that their practice had helped make this possible in the first place, as well as working very hard to keep mistakes to a minimum. Choi went 5-1 playing a monored deck.

"I'm sure I did so well because nobody expected my deck," Choi said. "I always tried to lead off with my artifact lands, so they might think I was some kind of whacky Affinity deck. Then they would play all their guys out and I could just use one of my main-deck Pyroclasms to surprise them and kill all their guys. It worked that way against the Affinity decks time after time."

Lee played Tooth and Nail to a 4-2 record Day 1, and Nam took an interesting Affinity build to 4-2 that had no black whatsoever. Choi confirmed that, pointing out that, by removing the Disciples and Night's Whispers, the deck was more consistent, and that they could keep the deck very fast but also include cards like Mana Leak in the main. It weakened the deck in the mirror match, but they felt that was okay for how much better the deck did against the other decks they expected to show up. Again, the players felt that the added surprise of making such radical choices made them more likely to win in what was otherwise regarded as a pretty mature format. As Choi put it, "We were very unpredictable, and that made it much harder for our opponents." 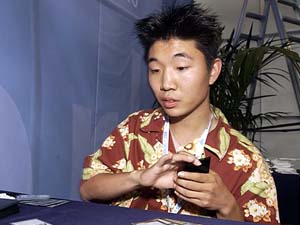 Incredibly, they only knew the final composition of the their team a couple weeks ago. Visas have been much more difficult to get lately, so the South Koreans ended up sending their National Champion (Nam) along with the fourth-place (Choi) and 13th-place (Lee) finishers.

They haven't had a chance to do a team Rochester draft together yet, but Lee has played in 19 Pro Tour and Grand Prix events, including the recent team event at Pro Tour-Seattle, and all of them have played in Team Rochester drafts with other teams, so they won't be starting completely from scratch on Saturday.

Considering the great payout for the national team competition, which goes all the way up to $10,000 each for first place, the South Koreans may be bringing back more than just national pride on the plane with them come Monday morning.