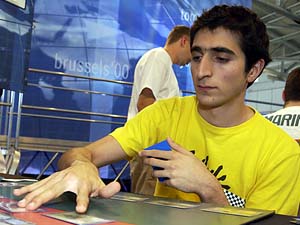 Nassif is hoping to make history Saturday. He is in a position to be the first player since the Pro Tour began to win the Magic Trifecta: World Team Championship, Individual World Championship, and Player of the Year. For those of you who remember the season that Kai won Worlds and was the Player of the Year, although Germany won the team event, Kai wasn't on the German National team that year.

That is not the closest we have ever had to the trifecta, though. In 2000, Jon Finkel won the World Championship, was a member of the winning U.S. National team, and finished second in the Player-of-the-Year race. Can Nassif take that performance one step farther?

He has already earned his berth in the Top 8, and the elimination process to determine the individual champion will be played out Sunday. Nassif can take care of the other two-thirds Saturday. He is playing in the team portion of the event alongside Olivier Ruel and Alexandre Peset, and a Top 16 finish Saturday will ensure that he cannot lose the Player of the Year race -- and a Top 12 will leave Kamiel Cornelissen drawing dead.

Cornelissen is in a position to overtake Nassif, but only if the French player does not win any additional points on the week. If Nassif and company flame out in the team competition, if Nassif fails to win an elimination match, and Cornelissen wins the World Championship, he can also win Player of the Year. That is a lot of "ifs" and "ands," but -- to add a "but" into the mix -- anything can happen.

Perhaps the most tantalizing scenario has Nassif placing in the Top 16 of the team competition and then losing in the quarterfinals Sunday while Kamiel wins the World Championship. Under that narrow set of circumstances, the two players would be deadlocked in the Player-of-the-Year race and a one-match playoff with their Standard decks would be necessitated. Here's the tricky part: That match would not be played out until Pro Tour-Columbus. It is unclear what decks would be used or what format they would play; all the Worlds policy guidelines indicate is that in the event of a tie, the two players face each other in a one-game playoff to occur at the next Pro Tour.

"We are not thinking about Top 16 today," Olivier Ruel said.

To which Nassif replied," Yes, we are aiming much higher than that."

Many players feel that Nassif has been the embodiment of the Player-of-the-Year award over the past 12 months. Even Kamiel's teammate from Von Dutch Jeroen Remie felt that the award should go to the French player.

"I really think that at this moment Nassif is the best player in the world," Remie said. "Don't get me wrong, Kamiel is awesome too. Gab puts so much time and energy into the game while Kamiel just seems to show up and do well."

Remie smiled at the notion of a one-match playoff for the title. He squared off against Nassif's team in the first round of play Saturday. The French team would need to do no better than a 2-2 record to place as low as Top 16 (they could even place in the Top 12 with that record). Yet Remie saw a chance for his countryman. 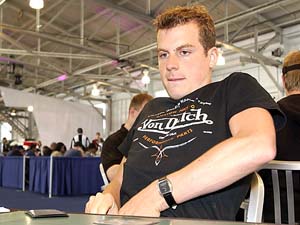 "The French draft is not that great so it might happen," he said. "Their game really slips when they play Limited."

When asked which player deserved to end his reign as Player of the Year, Kai Budde shrugged, "Nassif or Kamiel would be fine. For Kamiel to win he would have won two Pro Tours this year. If not, then Nassif deserves to win."

What Kai could not understand is why Kamiel gave Nassif a free spot in the Top 8 in Friday's final round by agreeing to draw with him. Kamiel could not miss the Top 8, even with a loss at that point, and if he knocked Nassif off he would have been in a much better position to take the lead in the race. While the difference between first and second is not a significant one in terms of the cash payout, the free trips and accommodations to all the Pro Tours has significant value -- as Kai will attest to. This coming year will mark the first time Kai has had to pay for his own trip since the turn of the century.

William Jensen shook his head. "I would have drawn with anybody at that point. I would feel too bad about knocking someone out of the Top 8 of Worlds."

When the weekend comes to a conclusion, Nicolai Herzog will have won well over $80,000 in prize money this year with two Pro Tour trophies on his proverbial mantle -- but he will not be Player of the Year. The best he can hope for is second and he could finish third. If anyone was going to take the title from him, Nicolai hoped it would go to Nassif.

"He has been so good this year," Herzog said. "I had a feeling it would go like this. Nassif has been so strong at every event this year."

The Rookie-of-the-Year race is also impacted by the first-round action between the French and Dutch teams. Alexandre Peset and Julien Nuijten are both contenders to hoist that trophy. Peset is currently in the lead of that race but can not add any more points to his total once the team competition come to a conclusion. 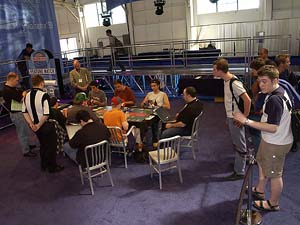 On the Dutch side of the table, Julien has a lot of ground to make up but has two days to do so. The remarkable fifteen year old gets to play alongside Team Pro Tour winner Jeroen Remie to earn points today and is already guaranteed twelve points by virtue of a Top 8 berth in tomorrow's action. If he his Eternal Slide deck carries him to the World Championship tomorrow then there is nothing that Peset can do but watch.

It is not as simple as that for Julien though as a third candidate for the Rookie title is also playing tomorrow. Aeo Paquette has only played in two Pro Tours -- this week's event and Pro Tour Amsterdam. He has now made the Top 8 at each event, although if he wins a game in the Top 8, it will be his first win ever on Sunday. With each step up the ladder by Peset on Saturday, the rookie title becomes harder and harder for Paquette to win. If the French team wins Saturday's competition, it would take a second-place finish on Paquette's part to win the title -- and under those circumstances, only a flat-out World Championship title could win it for Nuijten.

It is an exciting week and all of the year-end races are still in flux. Keep your browsers pointed toward San Francisco as we follow all the action and keep you updated on all the implications.