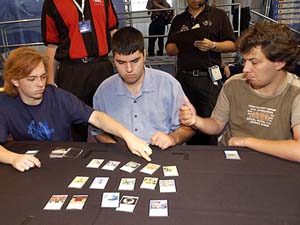 tough choice was presented to the Germans right off the bat in the Team Finals draft. They opened a pack with Duplicant, Grab the Reins, Neurok Spy and Granite Shard. The Germans had Torben Twiefel take Grab the Reins while Roland Bode took the Granite Shard. This left Duplicant for Belgium's Geoffrey Siron. Sebastian Zink went right into his normal black-blue color configuration as he received a late Aether Spellbomb while Lemoine took Skyhunter Cub and Raise the Alarm establishing himself as the white drafter on Belgium.

The first time that Belgium opened their pack they made a surprising pick taking a Leonin Scimitar second out of a weak pack. Also they had Dilson Ramos Da Fonseca take Irradiate over Consume Spirit, leaving the X spell to fall into Zink's hands.

The next pack of the draft gave Belgium both Clockwork Dragon and Granite Shard. The trick was dividing them up. Vincent Lemoine stayed mono white as he took the dragon leaving Granite Shard for Siron. Meanwhile, Twiefel continued to grab green cards to go along with his Grab the Reins. A Creeping Mold and a Tel-Jilad's Chosen fell into his hands. Both teams appeared to have solid set strategies and since the Mirrodin packs were a touch weak there didn't appear to be much to sway them away from their preset color opinions.

As they waited for the last Mirrodin to be opened, Lemoine and Siron compared decks. Siron was going green-red. The last pack gave Germany an Electrostatic Bolt for Zink, an Arrest for Twiefel and a Goblin Replica for Bode. Apparently, Twiefel would be going white green and just splashing Grab the Reins.

The Darksteel pack that Zink opened was very deep. He decided on Dismantle over Spire Golem, Essence Drain and Leonin Bola. Siron was very happy to grab the Bola while Lemoine and Ramos Da Fonseca cemented their colors with Leonin Battlemage and Essence Drain, respectively.

Bode probably received the highest quality cards out of the pack when he took a wheel of Vedalken Engineer and Spire Golem.

Dividing up colors didn't appear to be a problem for the Belgium team in the least. Barbed Lightning, Leonin Bola and Spire Golem went 1,2,3 to the Belgium team. No powerful white cards from Lemoine's Darksteel pack led him to choose a second color. Lemoine went with Stand Together to complement his white. Ramos Da Fonseca took a Greater Harvester while Bode once again got Spire Golem and Vedalken Engineer out of the same pack. 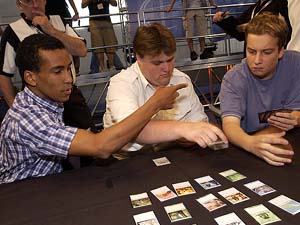 There appeared to be a small miscommunication within the Belgium team during this pack as well when Siron took Screams from Within that Ramos Da Fonseca had clearly indicated interest in.

A quick breakdown of the colors that the players were playing so far: red- black, white-green and blue with Affinity cards for Germany while for Belgium it appeared to be blue black, white and red green.

For the second time in almost as many packs Belgium didn't appear to have a draft leader. Ramos Da Fonseca and Siron continued to exchange looks, as they obviously were not on the same page.

A small clap came from Siron when he saw that Twiefel had opened Fireball. The clapping was not sincere. Zink picked to Fireball that should help in his match up a great deal. Siron was finally giving some instructions about what needed done for Belgium to succeed.

Fifth Dawn always has a way of shaking things up because of the Sunburst mechanic. Twiefel started off taking an Infused Arrows while Bode grabbed a Skyreach Manta. When Zink wheeled an Opaline Bracers, all three Germans had taken a Sunburst card out of the first Fifth Dawn pack.

Well, well, well . . . Ramos Da Fonseca opened a second Bringer, this time Bringer of the Blue Dawn. Belgium had already had out two Bringers on the same board once this weekend would they be able to recreate that magic in the finals this time? 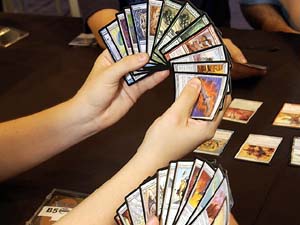 Lemoine opted to take a Stasis Cocoon for his matchup, leaving a Furnace Whelp to Siron and a Magma Giant that traveled all the way to Bode. Whether or not the Whelp or the Giant was the better pick would be determined on the battlefield.

Zink's black-red deck was coming together nicely and Cranial Plating would be even nicer. The Belgian team decided to take an Eternal Witness for Siron's deck instead of taking the Plating away from Zink. The last Fifth Dawn pack gave the Germans a Magma Giant, an Opaline Bracers and a Vedalken Mastermind.

1 Bringer of the Red Dawn
23 Cards