Posted in Event Coverage on September 7, 2004 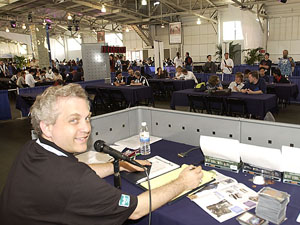 there are five days of intense Magic competition at Worlds, but that’s not the only event happening this weekend. Friday night, I ran an event that I run at every Pro Tour I attend -- the Question Mark Magic Trivia Game show.

Here’s how it works: any team of three or fewer players can enter. There is no entry fee. The game show is then run like a Swiss tournament. Each round, each team is paired against another team. Whoever scores better at the trivia wins the round. Last night we had seven teams, so we played five rounds of Swiss and then cut to a Top 4.

After the tournament, all participating teams draft from a table of prizes (provided by sponsor King Games). A free event that everyone participating in gets prizes -- the best deal at the Pro Tour. I thought it might be fun to let all of you see how you would have done if you were here. Provided below are the questions for each round -- answers are listed at the end of the article. Try it out to see how you fare.

The answer for each question below is an expansion (note: not a base set). You get 1 point for each correct answer.

1) What expansion has premium cards with alternate art?

2) What was the first expansion (once again not a base set) to have a merfolk?

3) What was the first expansion where the uncommons and rares were printed on a different sheet?

4) What was the first expansion to reference the Weatherlight?

5) What expansion had the first two-color multi-color card with enemy colors?

6) What was the first expansion to have non-scanable booster wrap?

7) What expansion was mistakenly collated such that only half of the uncommons appeared in any one box?

8) What was the first expansion to have exactly three different booster pack images?

9) What was the first expansion to have an artifact with a colored activation?

10) What was the first expansion to have the mono-colored cards not appear in equal number?

For each letter of the alphabet, fill in a legend (the creature type, not the expansion) that starts with that letter. You may only write one answer per letter. “None” is an acceptable answer. Note that three letters that have an answer of “none.” You get 1 point for each correct answer.

Name how many cards were (or will be) sold in each of the following booster packs. You get 1 point for each correct answer.

This is the 11th World Championships. For this round, you need to name the twenty countries (and be aware that there are a bunch of countries whose names appear multiple times) that have played in the ten previous finals (meaning the Top 2 match). You get 1 point for each correct answer.

Here are ten cards that appear in Eighth Edition:

Put these cards in the chronological order that they were first printed in. Your score is the number of cards in the longest correct chain in your answer.

All your answers for this question must start with the same letter, but you get to choose the letter. Name as many creature types of Mistform Ultimus as you can.

For each card, choose the cost that King Games (our sponsor) was selling that card at this event. (Note that these costs may change in the future.)

So how did you do? The answers are below.

In the competition, Team Kiki Jiki, Mirrorbreaker (I make the teams choose a Magic card title as a name) won. It probably helped that one of their member, Jeremy Smith, runs the Magic price guide in Inquest Magazine.

2) The Dark. The merfolk was Merfolk Assassin.

3) Legends. Both Arabian Nights and Antiquities had a single sheet for the uncommons and the rares (which is why there are things like U1’s and U3’s).

4) Mirage. The Weatherlight is referenced in flavor text.

5) The Dark. The card was Dark Heart of the Wood. It was a black/green enchantment.

8) Tempest. There was originally going to be five images but the art director at the time, Matt Wilson, decided there were three that he liked better than the rest and stopped at three.

9) Apocalypse. The card was Legacy Weapon.

10) The Dark. Due to the few multi-colored cards, white and blue had more mono-colored cards than black, red and green.

For each letter I’ve listed a popular legend: (other answers obviously exist)

A – Akroma, Angel of Wrath

Here is the creature types of Mistform Ultimus, as of Fifth Dawn:

Posted in Event Coverage on September 7, 2004