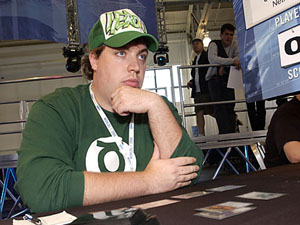 no doubt Jeroen Remie is having a "tremendous month," as he puts it, winning Pro Tour-Seattle with his team, following that up by becoming the Dutch National Champion, and topping it off with a Top 8 appearance at Grand Prix-New Jersey. Facing off against Remie in a second-round feature match was Ben Rubin, winner of two Masters Series events and Grand Prix-Anaheim earlier this season. Both players were running a bunch of artifacts lands in their decks, but while Remie's are used to help power out Arcbound Ravagers and Affinity, Rubin's are used to help power out Krark-Clan Ironworks and sundry combo parts.

Jeroen started off with two mulligans, searching for a more aggressive hand. Rubin kept his hand and they were off. Rubin showed right from the start that his affinity deck was something different by playing an Ancient Den, Tree of Tales, and Talisman of Progress. The answer as to what deck he was playing soon became apparent when he casually dropped a turn-three Krark-Clan Ironworks to contend with Remie's Cranial Plating-equipped Disciple of Vault that was lowering Ben's life in six- and seven-point chunks.

Rubin tried to cast Myr Incubator on turn four, but Remie showed that he too had some tech in his deck by Mana Leaking Rubin's game-ender, forcing Rubin to sacrifice additional artifacts to pay for the counterspell and lowering Ben's life. Remie drew his card and smiled, showing Rubin the Arcbound Ravager he had just drawn, and it was on to game 2.

Remie kept his opening hand in game 2, which held Seething Song, Furnace Dragon, and enough artifact lands to cast the artifact-hoser on turn three. Rubin started out with a turn-two Thoughtcast, followed by a Talisman, Pentad Prism, and Fabricate for Krark-Clan Ironworks on turn three. Unfortunately for him, Remie's third-turn Furnace Dragon brought a large frown to his face and removed the entire board from the game minus the Dragon itself.

Ben rebuilt with lands and a Pentad Prism, taking beats from the Dragon and a new Blinkmoth Nexus and dropping to seven on a subsequent attack. Two more Prisms let Rubin play Ironworks, and then sacrifice all of his Prisms to play Myr Incubator. Remie's next attack dropped Rubin to one, but Ben simply activated the Incubator at the end of Jeroen's turn, putting a host of 1/1 artifact tokens into play, and earned the concession by pulling out a win from absolutely nothing.

"Wow, that was lucky," observed Rubin. "My draw was pretty insane as well."

"Drawing lands seemed pretty good for you, though," Remie replied.

"Yeah, I drew two of them back to back. It was the only way I had a chance to win that one," answered Rubin.

A turn-one Aether Vial and turn-two Arcbound Ravager formed a solid start for Remie in game 3. Rubin had a second-turn Leonin Elder to help protect some of his life total as he waited to put together the pieces of his combo puzzle. 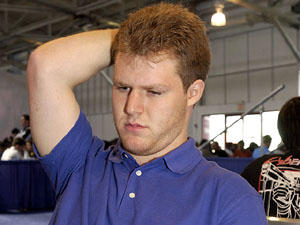 Rubin paused for a long time on his third turn, considering his options before Fabricating for Myr Incubator. Remie attacked again, this time with a Blinkmoth Nexus, Ravager, and an Arcbound Worker before playing a Vault of Whispers and a Frogmite, bringing Ben's life back up to a very healthy 16.

Rubin laid a land and cast an Ironworks on his own turn. Another attack dropped Rubin to 10 this time, but Remie couldn't push through enough damage before Ben cast Myr Incubator, activating it to put 32 Myr tokens into play and bumping his life to 44. Remie's only out at that point was to draw a Furnace Dragon from the top of his deck, but instead his deck taunted him, giving him a second Seething Song to go along with the one already in his hand.