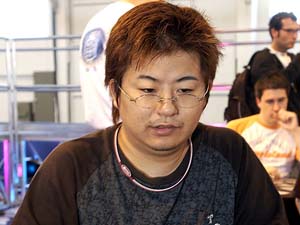 Jonsson has made two Top 8's this year but both have come from limited Pro Tours. He placed in the Top 3 of Swedish Nationals so he is representing Sweden along with teammates Carl Thille and Simon Carlsson. Heading into round 4, they were 2-1, 1-2 and 0-3, respectively, so they need some wins to keep themselves in the Team Competition.

Jonsson played Goblins with Skullclamp at Swedish Nationals but decided on white-blue control because of the good matchups it has versus Affinity and Goblins. Jonsson knows that Jin Okamoto was playing Tooth and Nail, which Anton felt was a bad matchup. For the first game he didn't have enough hard counters to stop the Tooth and Nail from resolving and he decided not to include much in the way of sideboard answers either.

Coming off of a Top 2 finish at Pro Tour-Seattle and Top 8 at Worlds 2003, Okamoto was ready to make a big splash at Worlds. Marco Blume looked at the feature match area and saw that Anton would be playing Jin. He gave a woot and said about Jin, "Oh the master!" While the Japanese rarely socialize with European magic players, the respect they have received has gone up greatly in the past couple of years.

Both players sat shuffling silently preparing for their match. They each had 1-2 records so a win would go a long way to improve their shot at a strong finish this year. Jin won the die roll and said simply, "I play."

The matchup involved blue-white trying to stop Tooth and Nail from resolving while the Tooth deck wanted to apply pressure to force its tooth and nails through. With the addition of Eternal WitnessTooth and Nail has another viable way to use card advantage to pave its way to victory.

After a second-turn Vine Trellis, Jin fired out a Reap and Sow to power his Urzatron and then used his Tower to place an Oblivion Stone. Anton simply cycled Arkoma's Vengeance and played his fourth land. Jin used Eternal Witness to bring back the Reap and Sow that helped him keep the pressure on Anton.

Jin hit for 2 with the Witness and entwined a Reap and Sow to kill an Island and fetch a Forest. The Tooth and Nail deck proved to be the aggressor each turn while blue-white just played land.

Anton stopped the Witness with a Wrath of God but Jin drew a Triskelion. Soon the Trike had a fate counter to go along with its normal +1/+1 counter but that couldn't save it from a Wing Shards.

When Jin finally managed a Tooth and Nail, Anton had the Rewind waiting. The playing of lands continued. Jin had out seven Urzas lands while Anton had out three Temple of the False Gods to go along with his Islands and Plains.

Next Jin tried a Mindslaver which Anton let resolve. It also received a Fate counter. After a few turns of drawing and saying done, Anton tried an Eternal Dragon. Jin was happy to remove it with a Duplicant.

Anton cycled a Decree of Justice but Jin had an Oblivion Stone waiting So Anton cycled another Decree. Jin had drawn too many lands and had no more answers, as he died to a handful of Soldier tokens.

Jin once again decided to play for game 2 but this time started the game with a mulligan and a Vine Trellis. Anton led with a Wayfarer's Bauble. Jin started to assemble the Urzatron when his Sylvan Scrying fetched an Urza's Power Plant and another to fetch the Mine. Anton kept playing land and passing the turn. In an exciting turn of events Jin used his third Sylvan Scrying to get a Tranquil Thicket to cycle away. He then laid an Oblivion Stone. 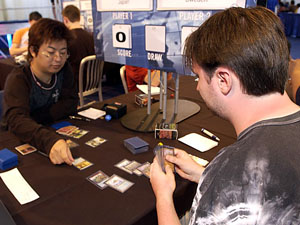 Jin brought out a Xantid Swarm to help his chances of resolving a Tooth and Nail while end step Anton cycled an Akroma's Vengeance and an Eternal Dragon. Anton then cast Wrath of God to stop the pesky insect from preventing his plethora of permission.

Jin tried a Tooth and Nail but it met Rewind. Anton cycled a Decree of Justice to make two Soldiers for the beat down. Anton cycled a second Decree to get up to seven Soldiers. When Jin tried to activate the Oblivion Stone, Anton played Stifle. Jin ran out of threats and died to Soldier tokens in short order.