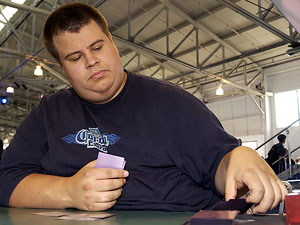 Hayrynen is playing in his first Pro Tour, but qualified for this event by making the national team of Finland, an impressive feat for an amateur. German player Marco Blume of Phoenix Foundation fame is definitely not playing in his first Pro Tour, and is looking to further establish himself as an excellent individual player. At stake this round is a coveted 6-0 start to cap off today's Standard format competition.

The match-up should be an interesting one. Marco is playing the blue-red control deck covered in an article by Mike Turian. Marco claimed during that article that he hated his deck, and that it didn't even look like a constructed deck, but he was headed into the final round of Standard competition undefeated. When asked how he liked his deck now, he laughed, emphatically stating, "I still hate it!" His opponent is playing the dreaded Ravager Affinity deck, the most popular choice of the field but presumably the best matchup for Marco's deck. Interestingly, both players are undefeated in this matchup. Marco is 3-0 against Affinity, and Hayrynen is 1-0 against the blue-red control.

Things did not start off well for Marco. First he lost the roll to go first, and then he was forced to mulligan when his opening hand was revealed to contain seven land. His opponent started off very strong with Welding Jar, Seat of the Synod, and Chromatic Sphere, followed up by Great Furnace and Arcbound Ravager on his second turn. The beatings continued next turn with a second Arcbound Ravager.

Meanwhile, on Marco's side of the table, it was three Islands in play, desperately looking for either red mana or land number four. Blume had a Thirst for Knowledge that led to a very juicy hand that included the crushing March of the Machines, but still no mana to put things away.

Almost mocking him, his draw step on his fourth turn yielded the mana he was looking for, but not in the form he would have chosen -- it was a Darksteel Ingot. Marco did his best to defend himself, but at this point he was just too far behind and a Shrapnel Blast from his opponent closed the door.

During shuffling, Marco joked, "That was pretty fast." His opponent chuckled and just said "Yeah."

This time Marco had the tools to disrupt some of his opponent's blazing early game, burning out a turn-one Ornithopter. However, Andrei had another blistering start, dropping out a Frogmite on turn two which came over on turn three for a very impressive 10 damage thanks to some Cranial Plating. Marco's turn was just as devastating, however, as March of the Machines wiped out his opponent's mana base. Marco's next turn saw a brutal Pyroclasm wipe the board -- well, his opponent's board, that is. A couple more turns were played out, but a sideboarded Arc-Slogger made an appearance for Marco and it was definitely time for game 3.

The toughest decision of this game was almost surely Marco's opening hand. Filled with the Annuls and red removal he needed to stabilize the early game, it had only two Islands and an Ingot for mana. He decided to keep, and mana was once again his bane. 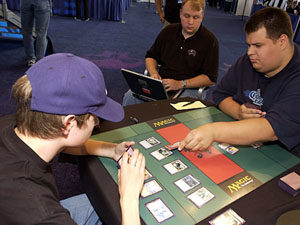 Annul No. 1 stopped an Arcbound Ravager after a Worker slipped in first turn, but things looked worse when a Disciple followed it into play. Things got grim for Marco when he didn't find his third land to get the ingot into play. Annul No. 2 denied a Cranial Plating but time was running out and he still didn't have a third land or red mana to go with his hand of removal.

Creatures began piling in from Hayrynen's side of the table, and when Marco's next turn still couldn't find a land, an opposing Shrapnel Blast put the game completely away, giving Andrei Hayrynen an impressive 6-0 record coming out of Day 1, and a shot at the title of Champion for the Standard format portion of the event -- as well as powering his national team to a four-way tie for first place.