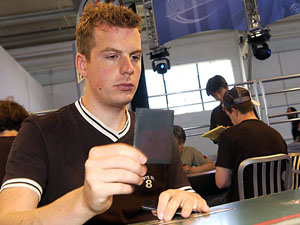 , but deadly. Kamiel Cornelissen never speaks: He has little to say, and less will to do so, communicating instead through action. In the talk of Buddes and Finkels in the Magic world, it's easy to forget the game's other prodigies, but that word -- prodigy -- applies better here than to just about any other competitor in this tournament.

"Kamiel is insane," long-time teammate Jeroen Remie told me over steaks last night. "We just kept handing him the bad decks at the team PT and he just never lost. Ever."

This is a man whose Pro Tour inauguration consisted of two consecutive finals appearances. No one else has done that in consecutive individual Pro Tours. Not Kai. Not Jon. No one.

Despite this, Kamiel could well be the less prestigious gamer in this match. Brock Parker is a Pro Tour champion in his own right, seeing victory in Boston this year with roommates Matt Linde and Huey Jensen -- but unlike most, when he got his check he just threw it on the pile. See, Brock's lifelong foray into gaming has led him along two paths: Magic, where friends and fun lie, and poker, from which he makes his living.

Magic: The Gathering players around the world thrilled at his third-place finish in this year's World Series of Poker, taking home more than $30,000 in the limit showdown event -- about three weeks before anyone had heard of Dave Williams. With two playing cards in hand, this may be the most feared player on the Pro Tour. Like Kamiel, Brock's a man of few words. He speaks with action, but more, he speaks with his bank account.

The match atmosphere was friendly. The two, sitting at 7-1 overall and 2-0 this draft, shook hands with both looking at ease. The die was rolled and Kamiel chose to start. It was Brock who came out swinging, with Vedalken Engineer giving him the early boost to cast a third-turn Anodet Lurker. Kamiel dealt with it quickly: Stasis Cocoon hit play and was son joined by the unconventional Aether Vial, a strong draw in light of Kamiel's repeated failure to play a fourth land.

Brock's creatures came to play, with an untargetable Hoverguard followed by Dross Scorpion and then Myr Enforcer. Kamiel coped with each as they came, but when he Vialed out a Tel-Jilad Wolf and tried to boost it with Fervent Charge, Brock had the splashed Echoing Decay ready, and Cornelissen's bleeding continued. Finally, he stabilized, but with his life low and Brock's deck full of evasion and burn, it was too late: a second Hoverguard and Barbed Lightning did the rest, leaving the Dutchman to play first in game 2

Things didn't start quite as smoothly for Brock the second time around, with his all-Mountain draw's color issues personified by Kamiel's casting the Cocoon again, this time on Brock's Silver Myr. Fortunately for the American, he'd managed to get out a Thought Courier before the Myr was subdued, and it enabled him to find the Island he needed to get going. Advanced Hoverguard hit play while Kamiel sat with only a Tanglewalker and Aether Vial, making the recovery appeared complete.

With Kamiel inactive, Brock's next play was a potential crippler -- Heartseeker hit play, with its ability to single handedly win a game very apparent in Cornelissen's weakened state. With five cards in hand to Kamiel's two, Brock almost seemed to have too many options: start pecking away at Kamiel's board position with the equipment, or continue casting spells in order to finish him off before top decks could interfere with victory.

Finally, he decided an attack with open mana was in order, and when Kamiel Vialed out Leonin Battlemage, Brock was ready with Barbed Lightning. The Tanglewalker had reduced him to 8 life through its constant pestering, but that only gave Brock the appearance of the cat playing with its food.

Myr Enforcer came to play and Kamiel couldn't attack any more. When Brock looted away Vedalken Sorcerer at the end of turn, Kamiel had to shiver a little, but the following Dismantle targeting the Vial (designed to give the Enforcer +6/+6) was countered by Razor Barrier, and then the Enforcer died to an instant speed Tyrranax.

"What could I do?" Brock asked. The watching Jeroen responded, "Kamiel is awesome."

With Brock now desperately in need of a fifth land, Kamiel put a seventh counter on the Vial. He cast Solemn Simulacrum in memory of the departed Jens Thoren (he probably picked it for the tickets) and then played a free Luminous Angel the turn Brock finally got the Heartseeker on his Hoverguard. The ensuing creature rush forced Brock's remaining creatures of the table, and with neither the cards or time needed to turn things around, he began shuffling for Game 3. 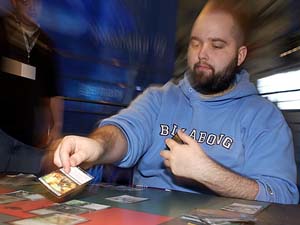 The finale started poorly for Kamiel. The quietest of the quiet started with a mulligan, followed by the ever-popular second-turn Steel Wall. Fortunately, with Brock mana flooded, Cornelissen was able to add Jens, Skyhunter Prowler and Fangren Pathcutter to the mix unopposed.

For a poker player, Parker was visibly shaken. His draw had produced next to nothing, and even a Barbed Lightning to the Prowler couldn't help. With a draw of eight land and four spells, Brock was helpless to Kamiel's stampede: Cornelissen wins, moving to 8-1 halfway through World Championships.