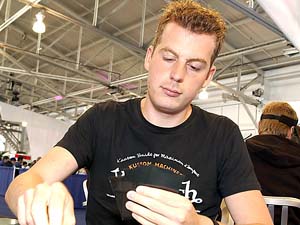 Craig Krempels was referring to the fact that Team USA was sitting only eight points behind the first-place Ukrainian team on the team leaderboard. Standing in his way was Cornelissen of Von Dutch -- not the country, but the powerhouse team that he, Jeroen Remie, and Jelger Wiegersma formed to conquer the field at Pro Tour-Seattle.

"11-1, wow that's ridiculous," Krempels remarked on Cornelissen's record. "You must be sitting on top of the world."

Krempels worked with Team TOGIT for this event. He also talked some with Team USA member Ben Zoz making sure that the team would all have good tech for the Mirrodin Block portion of Worlds.

Cornelissen led with a Darksteel Citadel and an Aether Vial, showing that he was playing affinity. Krempels dropped out a Vault of the Whispers and Arcbound Worker. Taking a quick look around the Feature Match area showed that these two were the only affinity decks of the eight players under the spotlights.

Arcbound Ravager and Frogmite joined Cornelissen's team, while Krempels cast a two-mana Thoughtcast. Cornelissen used the Vial to pop out an Arcbound Worker. On his own turn, he brought down Cranial Plating and placed it on the Frogmite. Then he swung with everything. Krempels had too weak of a board position and scooped on his third turn.

Krempels started the second game with a turn-one Aether Vial. This time Cornelissen was the one with the Arcbound Worker. On his second turn, Krempels brought down Disciple of the Vault but had no other play. Cornelissen had an Arcbound Ravager and a Frogmite to get his offense going once again. Krempels used the Vial to bring into play an Arcbound Worker, but his third turn saw no play as he passed with all three of his lands untapped.

Cornelissen dropped down a Chromatic Sphere, a Relic Barrier and a Myr Enforcer before sending in all three of his creatures into the red zone. Krempels traded off the Arcbound Workers.

Krempels seemed discouraged, but his draw of Thoughtcast helped his spirits slightly. That was followed by a Blinkmoth Nexus before he ended his turn. Cornelissen emptied his hand, playing out a second Arcbound Ravager and a second Frogmite. Cornelissen sent his whole team again and Krempels had no blocks. 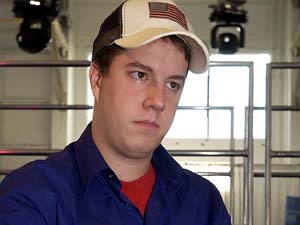 Cornelissen had an empty hand but drew Thoughtcast as his only card. Krempels started to complain about how good Cornelissen's draw had been.

"Sure you draw that Thoughtcast . . . why wouldn't you, both games your draw has been perfect," Krempels lamented.

Krempels couldn't deal with the horde of creatures attacking him and conceded. With the victory, Cornelissen stayed atop of the standings with an impressive 12-1 record.