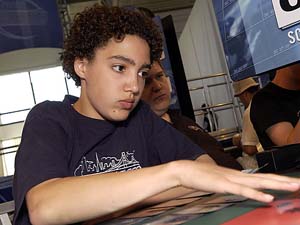 the competitors sat down, I asked the young Julien Nuijten about his 6-0 run on draft day. Eventually Nassif, looking pointedly at Kamiel Cornelissen at the next table, spoke up, "I would have been 6-0 but some people are very lucky…"

"You lost to him?" Nuijten questioned.
"I lost to him, and Antoine after that," answered Nassif.

The questions from Nuijten continued: "Did you see his AEther Vial deck?"

"I didn't lose to that. I lost to a good deck," he chuckled.

Anyway, back to this match. Both players were 10-3 and in good shape coming into the round. Nassif is a strong contender to win Player of the Year and Nuijten is a member of the Dutch national team. He predicted that Nassif was playing Affinity, and revealed that he was playing the same popular deck himself.

Nuijten found out that he was wrong when he lost both Vault of Whispers and Talisman of Dominance to Oxidizes. Nassif added Blasting Station, and Nuijten read the card with an eyebrow raised. Unfortunately he was stuck on one land and could only watch as Nassif brought back an Oxidize with Eternal Witness. Nuijten read the Blasting Station again and started chuckling.

When Molder Slug hit the table, there was no more chuckling, only scooping.

Nuijten took a mulligan and led with AEther Vial. Nassif briefly considered using Tel-Jilad Justice on it during Nuijten's upkeep, in response to it getting a second counter, but declined. He quickly regretted it when Nuijten announced Thoughtcast, then a second Thoughtcast through Chromatic Sphere -- both for only one mana. He then destroyed the Vial on end step, but the damage had already been done. Nuijten had now drawn into Arcbound Ravager and he put it into play, chomping the Vial in response.

Destroying the Vial on upkeep:
Nassif Scrys. Nuijten Thoughtcasts for two mana and has to pass the turn.

Destroying the Vial on end step:
Nuijten Thoughtcasts twice, draws another card from Sphere, puts Ravager in play, gets an extra counter, and fizzles the Scry.

Nassif tried to salvage the game with Viridian Shaman on Arcbound Ravager, but Nuitjen had the extra mana and the presence of mind to move them onto his Blinkmoth Nexus. Despite bringing back the Tel-Jilad Justice with Eternal Witness, Nassif was now falling too far behind in the game. He shook his head, swearing in French, clearly annoyed.

When he played his fifth land, Nuitjen asked, "Molder Slug?"

"Doesn't even seem that good…"

He played Troll Ascetic and left up mana for his Tel-Jilad Justice. A second Disciple hit the table and Nassif was now in plenty of trouble. He was able to play out Oblivion Stone, but at 7 life he couldn't activate it without taking six from the artifacts in play and one more from an attack from the remaining Nexus. When Nuitjen showed that he'd drawn a new Ravager, the game was over. 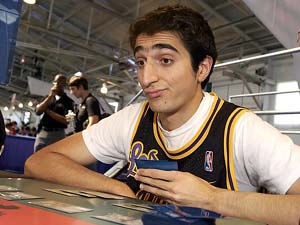 "You think this is a good matchup for you?" Nuitjen asked.

"I guess…I probably win this game if I Justice your Vial right away," Nassif answered in his usual modest fashion.

Unfortunately, the game did not go well for him. He had Tel-Jilad Chosen and Viridian Shaman, but the fun ended there, when he stalled on three lands. Oblivion Stone sat uselessly as Nuijten was free to build up his forces, with Moriok Rigger being the main threat. Nassif chumped it for as long as he could, but eventually Disciple plus Rigger and Ravager proved to be far too much. He died with three Forests in play.