"Which one is which?" -- Asako Seo, a Japanese writer 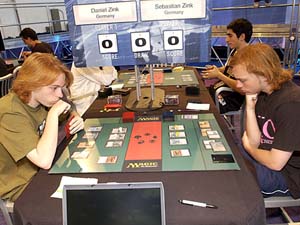 When World Champion Daniel Zink made his way toward the Fort Mason Center on Friday with his Affinity deck in tow, he knew he was in for more than a couple mirror matches. Brian David-Marshall had predicted that as much as 60 percent of the field would be running artifacts, artifacts and more artifacts, so Daniel thought he was ready for the mirror. This, however, was just silly.

Daniel had one distinct disadvantage coming into the match with his opponent: They were playing the same deck card for card -- and not only that, but the man sitting across from him, Sebastian Zink, had been born one minute earlier (though due to Caesarean section, the difference could be protested as negligible by the younger). Same hair, same deck, same frame, despite the slightly different facial features, one could say this was truly a mirror match. And more than one did.

Each of the following was heard from onlookers and passers by as the match progressed:

Further stupidity was attempted, but judges sent all said harlequins and practitioners of pun from the building after this reached the level of true silliness.

Both players lamented the matchup -- not because they're brothers, but because they were playing the same deck, card for card. After Sebastian's Game 1 victory by Blinkmoth Nexus, he threw four Oxidize, three Viridian Shaman and a Glimmervoid on the table, asking, "Shall we sideboard these?"

The more aggressive of the two, the elder Zink showed the strains of feature-match play as the round wore on, with heavy breathing and hair tugging. Predictably, the defending champion was more composed. 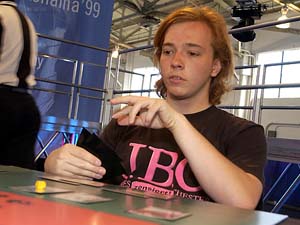 The board was a constant mess of Moriok Riggers, Cranial Platings and Arcbound Ravagers. Blinkmoth Nexus joined Plating as the cards with the most profound effect in the matchup, combining for evasive face-smashings of 8 or 9 points a shot. In the end, Sebastian drew one more Nexus in each game of the match. In the end, that was all he needed.

The final score stood 2-0 in Sebastian's favor, but Daniel could take solace in the fact that he played his twin in both Grand Prix-Goteborg and German Nationals 2003, and went on to win both tournaments.

Now, with Sebastian at 11-3-1 and Daniel at 10-4-1, both seem primed for a run at keeping the title in the family for another 12 months. If Daniel wins, it would be a nice c bookend with last year's trophy. If Sebastian does, it'll be one more similarity between the two.