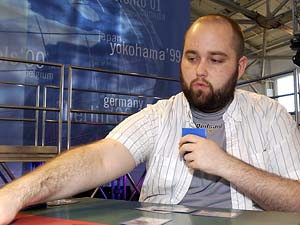 into round 15, Belgium held the team lead with 87 points. Geoffrey Siron finished second at Belgium Nationals and has contributed 33 points to the country's total. Siron placed ninth at Pro Tour-Osaka, which was Odyssey Block constructed. At the last minute he decided to switch to Tooth and Nail. He felt that his other top choice, monogreen Beacon of Creation, wasn't quite as good as it needed to be. Brock Parker picked Affinity, feeling that you can't go too wrong choosing rock. Both had a 2-1 record heading into the match.

Parker started with a Disciple of the Vault, but Siron had an Electrostatic Bolt to kill it. Parker played an Arcbound Ravager, so Siron just used a second Bolt. Parker would not be stopped so easily, however, as he played out a second Ravager along with an Arcbound Worker.

A Viridian Shaman smashed the Ravager because Siron's red-green deck badly wanted to slow down the affinity machine. Parker played out his third Arcbound Ravager and had it grow to a 4/4 but it was destroyed this time by an Oxidize.

Parker appeared to be out of threats as he cycled through Chromatic Spheres. Siron finally went on the offensive with a Solemn Simulacrum. Siron just plain had more removal than Parker had threats.

Parker made two Cranial Plating but Siron used a Rude Awakening to produced the mana necessary for a entwined Tooth and Nail. Siron fetched out a Darksteel Colossus and an Eternal Witness that were enough to finish off Parker.

Parker started off with a mulligan. He then played out Aether Vial, which was tanked by Oxidize. Parker then dropped out an Arcbound Worker. Siron played a second-turn Sylvan Scrying.

Parker's third turn had him attacking for two with a Blinkmoth Nexus and an Arcbound Worker but he did nothing else. Siron played an Eternal Witness to fetch back the Oxidize but Parker played down a Moriok Rigger to punish any further artifact removal from Siron.

Another Sylvan Scrying fetched a Cloudpost for Siron. Parker cast an Aether Vial and sent his Arcbound Worker and Moriok Rigger into the red zone. Siron just played a Talisman of Impulse before passing the turn back to Parker.

Parker pulled a Thoughtcast from the top of his deck and played it for one. Then he sent in his 4/4 Rigger, who was chumped by the Witness as Siron fell to 13 life. 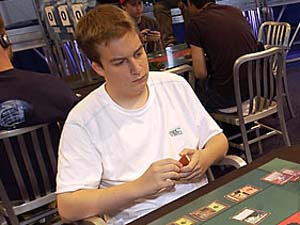 Siron was up to Tooth and Nail with entwine mana and so he decided to cast fetching a Platinum Angel and Leonin Abunas. The Abunas feels some pain as Parker throws a Shrapnel Blast at the 2/5 Cat Cleric.

On his own turn, Parker only played an Arcbound Ravager. With his attack, Parker sacrificed enough permanents to the Ravager to place Siron at 0 life. Now all he would need to do was kill the Platinum Angel to send the match to Game 3.

An Eternal Witness brought back the Viridian Shaman and Siron started his comeback at 0 life. A second Tooth and Nail looked to be a backbreaker as Parker couldn't find a way to remove the Angel before he ended up at 0 life.