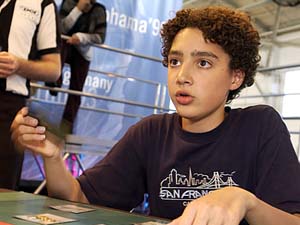 the United States has garnered most of the headlines over the first 10 years of Worlds, one cannot deny the tradition of excellence employed by the Dutch. Tom Van de Logt won the individual title in 2001. Jelger Wiegersma, Kamiel Cornelissen, and Jeroen Remie won this year's Pro Tour-Seattle. Noah Boeken, Bram Snepvangers, Frank Karsten, Victor van den Broek…these are names that ring through the Pro Tour's history.

This year, we've seen the beginning of a new chapter. At 15 years of age, Julien Nuijten came into this tournament armed with a prepubescent voice, a wicked 'do and the confidence of a champion. He was described repeatedly as seeming American in his willingness to trash-talk the more experienced players viciously and described by countrymen as an incredible talent. His future looked bright in light of his second-place finish at Nationals. The future, for both Julien and the Netherlands, is now.

Needing a win in the final round to make Top 8 in this, his first pro tournament, Julien started chatting comfortably with opponent Ignacio Parot of Chile, showing no signs of how the feature-match lights tended to wear down far more experienced players. Playing Vial Affinity (a deck to which Top 8 Zurich finisher Karsten has credited him with the creation of), Julien paired against Ignacio's Trinket Mage control deck, which hadn't lost on the day. Ignacio finished 4-1-1.

Game 1 was decided on Cranial Plating. His creatures destroyed, Julien attached the equipment to his active Blinkmoth Nexus and swung for 8. Ignacio destroyed the Plating, but a second Plating went on the Nexus for another 9. Ignacio started to stabilize, and Julien had no cards in hand, but a knock on his deck with authority accompanied by a yell of "THOUGHTCAST!!!" brought forth the sorcery, which in turn produced a Disciple of the Vault. 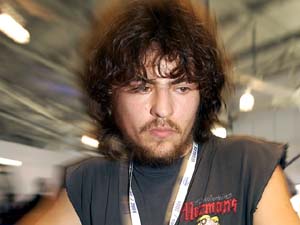 "Good is relative." answered the now-flying Dutchman. Within a turn, the game was over.

Ignacio had the look of a wounded warrior. He complained bitterly about Julien's momentary face-up shuffle, frustrated by the kid's card call. Frustration was replaced by elation though as Julien started Game 2 by mulliganing to six…then five…and then four.

A veteran would have been dejected, but the exuberance of youth is a powerful thing. Julien drew his first land on turn one, chirping "YAUSSSS" and playing Aether Vial. Then he drew his second land on turn two, chirping "YAUSSSS" one more time.
Julien started playing small men and pecking at Ignacio's life total as the Chilean sat with just two Forests, choosing repeatedly to not sacrifice a Spellbomb.

"This is unbelievable," he complained. 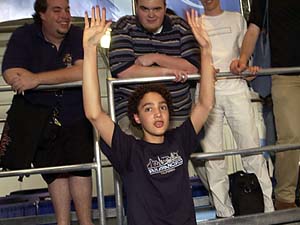 "No land? I'm sorry!" answered the child-monster, leaping on the hero's obvious weakness. Ignacio finally drew land and stabilized at 7, but a Nexus took him to 6, and then, when Parot tapped out in response to a Disciple, Shrapnel Blast sent him home on his shield, not with it.

Julien Nuijten seems to combine the good of all that came before him. He's possessed of Kamiel's play, and Noah's mouth, and Jelger's intuition and Tom's luck. He was taught by Rogier Maaten and Wessel Oomens and is now guided by National teammate Remie: He's all that's good about Dutch Magic. And now he'll play Sunday to prove it.