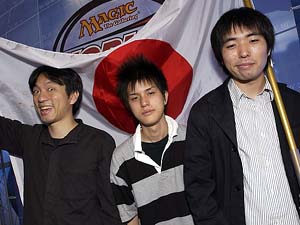 Han Chuen Soh, Wai Kin Au Yong, and Chuen Hwa Tan probably aren't household names to most magicthegathering.com readers, but they are making waves this weekend. Soh finished in the Top 8 of the individual competition, and has two previous Top 8's at limited Grand Prix. With one Grand Prix Top 8 to his name already, Malaysian National Champ Yong is looking to win for his country. All three Malaysians play Magic Online at least 2-3 times a week. Ironically they have talked with the Japanese to form the team strategy they will be using today.

S.A.I.? www.shop-fireBall.com2? The Japanese National team at Worlds doesn't have any players from these two successful teams. Instead Japan's hopes ride with Shuuhei Nakamura, Tsuyoshi Fujita, and Kenji Tsumura. Fujita is one of the top Japanese players. He was the first Japanese player to ever make a Pro Tour Top 8, finishing second at Pro Tour-Tokyo. Nakamura lives close to Fujita, which gave them ample opportunity to practice for team day. In fact, newcomer Tsumura traveled down to Osaka in order to practice with his teammates for Worlds.

The draft saw Tan and Tsumura heading towards a mirror match as both drafted white-blue. Tan's deck really benefited from opening up Solar Tide. He also was fortunate to pick up two Razor Golems. Tsumura didn't have any single card as powerful as the Solar Tide, but between Blinding Beam and two Grafted Wargear, Tsumura's deck looked as if it would be able to challenge the bomb-iliciousness of Solar Tide.

Yong's deck clearly became the strongest deck in the draft. He received Crystal Shard, Viridian Shaman, and Eternal Witness to go along with the fact that he was the only blue or green drafter on his team. In retrospect the Malaysians felt they made his deck too strong. They had intended to split their colors better but the way the packs opened were unable to achieve more of a balance between the decks.

Facing Yong would be Fujita, the Japanese National Champion. Fujita drafted a black-red deck. His biggest bomb would be Furnace Dragon, but unfortunately for the Japanese Furnace Dragon's board-clearing ability isn't particularly strong against Yong. Fujita filled his deck in with the typical one-for-one removal for which black-red is known. If he were to get ahead in tempo on Yong, he should be able to pull out an upset.

Soh has an uphill battle in front of him. After the draft one card haunted Soh -- Sword of Fire and Ice. Without the Sword, the match-up between Soh's black-red deck and Nakamura's five-color green-blue deck would be pretty even, but if the Sword of Fire and Ice comes down Soh has little chance. Soh's deck does have Detonate and Dismantle to kill the Sword but lacks a lethal bomb of its own. Besides the Sword of Fire and Ice, Nakamura also features two One Dozen Eyes and a Skyreach Manta.
Tan led off the match with a Conjurer's Bauble. Tsumura played Alpha Myr. Tan used his second turn to accelerate out mana while the Alpha Myr got in for two. A Gold Myr joined Tsumura's team.

Looking over at Nakamura, he already had a dominating lead getting a Sword of Fire and Ice on his Tangle Asp. Soon the Sword of Fire Ice was moved onto a Fangren Hunter that gave Japan an early 1-0 game lead.

Tan has used full advantage of Leonin Squire to bring back a Wayfarer's Bauble but Tsumura has applied a lot of pressure with a Grafted Wargear on Gold Myr. The Alpha Myr traded with Leonin Squire. Gold Myr added a Vulshok Morningstar onto its back. Now the little Gold Myr had grown to a 6/5 monster. The only thing that helped Tan was his Loxodon Anchorite.

Tan went for some equipment of his own as he played out a Taj-Nar Swordsmith and made X equal 2. He decided to fetch a Healer's Headdress into play but Tsumura neutralized the super healing team when he played an Arrest on the Anchorite.

When I came back to the C matchup, Tan was only on 5 life but he had just cast Auriok Champion to potentially give him some much needed life. The Headdress made life difficult in this white-blue on white blue mirror match. Tsumura added an Anchorite of his own to stall up the board even further.

Both the A and C match ups were in standstills. The white blue players continued to dump more and more onto the board without any hope of breaking through. Japan ended up taking the first match when Sword of Fire and Ice came out for a second time. It was just too much for Soh to handle.

The B match was fast and furious. Fujita's black-red deck was trying to make a comeback from the mana problems he had game 1. This time he had come out fast with a Fleshgrafter, Krark-Clan Grunt and Nim Abomination and took the second game.

Finally in the C matchup, one side finally started to deal damage as a Razor Golem acquired Whispersilk Cloak. Still it was slow progress though, at only a point of damage per turn. A Liar's Pendulum for Tan was building his board position but depleting his library. Soon enough Tan took the game when he found a Banshee's Blade for his Whispersilk Cloaked Razor Golem. Fujita could never find red mana to use Goblin Replica so game 1 went to Tan.

In the B match up the crucial Game 3 had gotten underway. Yong had out a Lightning Greaves. After trading away a Joiner Adept, he got it back with Eternal Witness. Fujita had out a Clockwork Condor and Relic Barrier. Yong started using Eternal Witness with Aether Spellbomb to wear down the Condor. While Fujita had no play, Yong played a Trinket Mage, only adding to his hoard. After adding the Greaves to the Mage, Yong sent in the team. Advanced Hoverguard traded with the Condor. The Condor returned the next turn when Fujita played Beacon of Unrest. The Condor wasn't enough, however, as Yong had too many creatures.

Game 2 for the C matchup could decide the winner of the match. With a win, Malaysia would put themselves within striking distance of first place. Tsumura knew the stakes were high and his deck came out strong. A second-turn Pteron Ghost, followed by a Nim Replica and Grafted Wargear put Tan under early pressure. He did have a Leonin Squire and Thermal Glider to help out along with a Razor Golem.

He chump-blocked early in the game throwing the Squire in front of the Replica and swung back for five with his creatures. A second Razor Golem helped out his board position but the Nim Replica kept bringing for six damage a turn.

In a surprise move, Tsumura removed the Wargear from the Nim Replica to place it on Thermal Glider. This would provide both lethal damage the next turn and a solid blocker to the two Razor Golems. One Razor Golem would trade with both the Thermal Glider and Alpha Myr, leaving Tsumura with just a Pteron Ghost. The Ghost would be lethal so a Thermal Glider of Tan's stepped in the way. Tan had no more answers to the flyer and died the next turn.

The Wargear proved to be too much for Tan to handle in game 2. In fact, both games came down to equipment. Tan mulliganed at the start of game 3. Tan thought a long time before he decided to mulligan again down to five cards.

Tan would at least have mana after his double-mulligan. His Wayfarer's Bauble accelerated him to a turn-three Loxodon Anchorite, followed by a Vulshok Morningstar. Tsumura started out strong as well with an Arcbound Worker, Gold Myr and Cranial Plating. 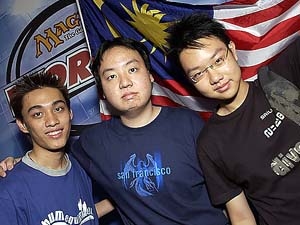 An Arrest on the Anchorite was very bad news for Malaysia's chances. The Arcbound Worker knocked Tan down to 13. Tan's last two cards were a Pteron Ghost and a Thermal Glider, while Tsumura played and equipped a Vulshok Morningstar. The Worker traded with Pteron Ghost but Tsumura wasn't out of threats yet. Tan added Razor Golem to his team that was his best possible draw off the top of his library. The Morningstar was moved onto Thermal Glider.

Gold Myr attacked for 4 and Tsumura had a Pteron Ghost of his own. A Banshee's Blade on Razor Golem would have been good for Tan, but Tsumura ended the match with a Bonesplitter. The Bonesplitter, Cranial Plating, and Morningstar on the Ghost did exactly enough damage to win the match for the Japanese.