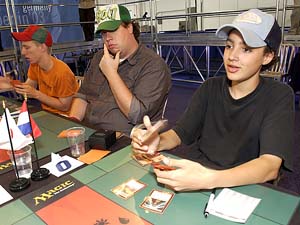 20 rounds of battling, Japan and the Netherlands found themselves in a tie for third place with two rounds to go. A long look at the standings and some simple math showed that each team could make the finals by winning both remaining rounds. To do so, they'd have to get by each other.

The Netherlands, made up of Pro Tour fixture Jeroen Remie (sporting a mesh baseball hat with "Heroin" written on it graffiti-style -- a play on the pronunciation of his own name), young Worlds Top 8'er Julien Nuijten, and Rogier Maaten went into the draft with a distinct plan. Maaten, in the A seat, would be black-blue, Remie in the middle would be white-red equipment, and Nuijten, in seat C, would be green with an eye toward sunburst.

The Japanese had a plan as well -- Shuuhei Nakamura would be the potential five-color-green drafter in seat A, National Champion Tsuyoshi Fujita would be red-black in the middle, and Kenji Tsumura would be white in seat C. Note that each team has a very different strategy, which is abnormal for this format. Usually by the time Worlds rolls around, team draft is mostly "solved," and the A, B, and C seat strategies are generally the same from team to team.

The second pack of the draft gave the Dutch a sweet, sweet Loxodon Warhammer, but it gave Japan a Betrayal of Flesh, a Spikeshot Goblin, and a Skyhunter Cub. The next pack was even worse for the Dutch, as Japan got identical picks: Nakamura took a second Betrayal, Fujita a second Spikeshot, and Tsumura a Viridian Longbow to give to his Cub. Two packs later, Tsumura got a second Longbow as well.

After Mirrodin, Japan was way up on card quality.

Darksteel: One Flub and Lots of Equipment

In the first pack of Darksteel, Japan made their first mistake. Fujita took an Essence Drain for his red-black deck over an Echoing Ruin, leaving the Ruin for Nakamura. Nakamura had no red cards to this point but a couple potent black ones (the Betrayals), and the Ruin would have put him into color number four. Had they swapped picks, both cards would have been played, but the Ruin ended up in the sideboard.

Fujita claimed that he knew Remie's white-red deck would have lots of 3/3's he'd need to kill, citing Loxodon Mystic specifically, and that he had no equipment to worry about yet, so he wanted the creature-removal spell. He also said he anticipated Nakamura having no trouble playing Echoing Ruin, but that turned out to not be the case.

It hardly mattered for Japan, however as they continued opening the hits. Fujita, looking for ways to pump his Spikeshots, took Vulshok Morningstar over Barbed Lightning, which ended up going to Remie. That Morningstar paled to the equipment that Nakamura was accumulating, however: he picked up a Leonin Bola, a Sword of Fire and Ice, and a Skullclamp. All he needed know were some creatures.

The Dutch picked up a few decent cards -- Razor Golem, Hoverguard Observer, a Bola of their own -- but were still way behind in quality.

I thought the Beacon was a no-brainer. It is a lot of damage, can hit players, and gives you the slim hope of being used more than once per game. Devour in Shadow can kill anything, but it's painful. He chose the black spell, and Tsumura took an Auriok Squire. Remie looked around in disbelief as he drafted the Beacon. His deck now had two ways to kill Spikeshot Goblin, and both of them were opened by the Japanese team.

Both teams fared well in the other packs. There were plenty of Trinket Mages to go around, and the Dutch got both of the Vulshok Sorcerers that were opened.


Nakamura's deck relies on his two Betrayals and busted equipment. Most of his creatures are mediocre and came from the last two sets. Echoing Ruin, as I said before, did not make the main deck. Nakamura said his deck was "very bad," and was not confident at all.


Fujita, eager to pump his Spikeshots, is running Opaline Bracers which more than likely will never be bigger than +2/+2. His Unforge is dead weight; the only equipment Remie drafted was a Leonin Scimitar that he did not play.


Tsumura quietly put together a nice blue-white equipment deck that really shows off the power of Viridian Longbow. I disagree with his running of the unpumpable Hematite Golem over Synod Centurion -- he has nine other artifacts to keep the 4/4 around.


Maaten is running two off-color lands to support his huge pile of Suntouched Myrs. The Talon of Pain is in the deck at Remie's request -- he said the Bats and the Stinger would be enough to power it up. Maaten has two ridiculous sideboarding plans should things go wrong -- one is to bring in Eater of Days, the other is to go with the savage Endless Whispers/Leveler/Krark-Clan Grunt game-ender. He's seriously considering at least the Eater because he feels the matchup against Nakamura is so bad.


Because his opponent has two Lose Hopes and two Spikeshot Goblins, Remie left his one-toughness creatures -- including Vulshok Sorcerer and Auriok Bladewarden -- in his sideboard. His deck is a lot slower because of it, and he is not confident that he can win.

Nuijten is confident in his deck -- red-green with a sunburst splash of Etched Oracle, Suncrusher, and Sawtooth Thresher. He is lacking creature removal, however, which could be an issue. Maaten needed a miracle to win, and the beginnings of that miracle showed up in his opening hand -- he came out quick with Grimclaw Bats, Neurok Spy, and Leonin Bola. Nakamura was calm and kept playing out his mediocre creatures and attacking back. The Dutchman was activating his Bats generously on offense, dropping both players' life totals quickly. But, as anticipated, Nakamura had the devastating Betrayal of Flesh for Maaten's key blocker, and pulled the game out.

Maaten dug in the sideboard for the Eater of Days and a Dream Plan -- a decision he'd regret. Again he started out great -- Grimclaw Bats, Talon of Pain, and Trinket Mage for his Bola. The Talon took down Nakamura's Thought Courier and Maaten was looking good.

But Nakamura had an ace up his sleeve, and waited for an opening. When Maaten used his Bola on his own turn to force through damage, Nakamura played and equipped Sword of Fire and Ice on his Myr Quadropod, swung in for 3 and killed the Grimclaw Bats. Maaten sighed.

Eater of Days came down -- the only creature the Dutchman could play that would be big enough to stop an equipped 'Pod. During Nakamura's extra turns, the floodgates opened: Skullclamp, clamp Myr Moonvessel, Bola, tap the Eater, attack, play more guys, clamp them, attack, Betrayal the Eater, win the game. Japan was up one match.

In the matchup between the two national champions, Fujita started off backpedaling by mulliganing twice in game 1. He did manage to play both of his Spikeshot Goblins in the early turns, but his mana was so tight that he couldn't afford to activate them and play other cards. Remie tried hard to keep up the beats with an Oxidda Golem, a Vulshok Berserker, and a Darksteel Brute. A timely Razor Barrier nullified both of Fujita's Spikeshot pings one turn, and the damage piled up high enough for Beacon of Destruction to end the game. Poetic in light of Fujita's refusal to draft the red rare.

Game 2 was over quickly, as Fujita evened the match with aggressive use of his Grimclaw Bats and Fleshgrafter -- he discarded two artifacts to the black Warrior on the last turn to surprise Remie with lethal damage.

In game 3, Remie played Stasis Cocoons on Fujita's first two creatures and began bashing away with Krark-Clan Grunt, Darksteel Brute, and Soldier Replica. Fujita managed to stabilize with a Bats wearing a 3-power Opaline Bracers (thanks to his Darksteel Ingot). He swung in with the Bats, trying to retake the lead, then dropped a Slith Firewalker.

Remie attacked with his team, and Fujita blocked the Grunt with his 1/1 and played Wail of the Nim with entwine, killing the 2/2 and saving his Slith . . . or so he thought. Kai Budde, watching from the sidelines, pointed out that the Slith took lethal damage twice -- once in combat, and once from the Wail -- and was not saved by the regeneration shield. The table judge explained it, and Fujita slumped. At the end of the turn, Remie aimed Barbed Lighting at Fujita's head, then laid the Beacon on the table from his hand, showing that if he drew land number five the match was over. He did in fact draw it, clapped his hands as he stoop up, and did a lap around the table.

The Bow Knows: Tsumura vs. Nuijten

Game 1 in the pivotal A seat was a foregone conclusion. Nuijten kept a hand with only two lands, but it was better than the one his opponent kept: six land and a Leonin Elder! Who keeps that?! The Japanese had a chance if he drew several spells before Nuijten drew a single land, but that wasn't the case. To make matters worse, when Tsumura cast Acquire on turn five, Nuijten had his three best artifacts in his hand. "Looking for this?" teased Nuijten, flashing the Loxodon Warhammer. 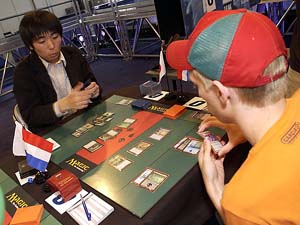 In game 2, Nuijten was deploying fatty after fatty, but all they could do was stare across the table at Tsumura's Vulshok Gauntlets-wielding Auriok Glaivemaster. A 6-power first-striker was more than any of Nuijten's creatures could handle. Viridian Longbow eventually hit the table, and the Japanese player was content to win a point at a time. It worked, too -- eventually Nuijten drew Echoing Ruin and was forced to kill the Bow as opposed to the Moat-like Gauntlets to prevent himself from dying. The cagy Tsumura was holding his second Bow in his hand anticipating the Ruin, however, and dropped it, ending the game in two turns.

In the deciding game 3, Nuijten missed his third land drop for three consecutive turns, but was making progress in spite of himself by playing out Sylvok Explorer, a Talisman, and Dawn's Reflection. Tsumura started in on the offensive with a Cranial Plating on a Soldier Replica. Nuijten played a second Reflection, then a Tel-Jilad Chosen and an Echoing Ruin on the Plating.

Tsumura played his Trinket Mage on the next turn, getting a Longbow, and then played Leonin Elder and the Bow with his last two mana. He could have played Echoing Truth on the two Dawn's Reflections, setting Nuijten back into the Stone Age, but he did not. It ended up not mattering much, however, as he played a Quicksilver Behemoth to hold the ground (with Awe Strike backup if necessary), and pinged the young Dutchman to death.

Japan moved on to the final round in good shape to make Sunday's finals. Fujita was quick to praise his teammates, saying that he hadn't won a draft match yet Saturday, and they were still near the top of the standings.