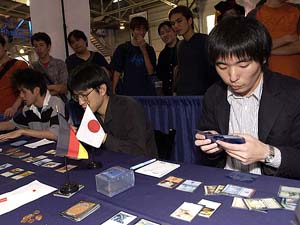 Germany sat down to play, Sebastian Zink yelled, "Go Denmark!" Germany would lock up a final appearance with a win; otherwise they need Denmark to beat Belgium. If both Japan and Belgium win, however, then Germany would end up in 3rd place. Japan had complete control over its fate: beat Germany and the Japanese would be in.

The Japanese drafted in the same style that got them to this point. Tsumara once again focused on a heavy white deck. This time, instead of blue he added red to finish up the deck. His deck's two best cards were Spikeshot Goblin and Blinding Beam. Fujita once again went with a control deck. This time he played black-blue. Fujita's deck had Devour in Shadow along with two Essence Drains. He splashed white for a late pick Auriok Salvagers. The only strange twist to their draft this round was Nakamura's deck was also white. He ended up with a five-color white deck. Purge, Auriok Champion, Fangren Hunter and Fireball rounded out his colorful deck.

In the Magic community Sebastian Zink was best known for being the brother of World Champion Daniel Zink. A team finals appearance could change all of that. Playing against Nakamura, Zink drafted a black-blue control deck. The final pack was kind to Zink, giving him his best creature -- Synod Centurion. Zink already had a Leonin Bola, a Soul Foundry and a Mephitic Ooze at that point. The largest weakness to Zink's deck would be his lack of removal.

Torben Twiefel won the German National Championships but he presently resides in Virginia. He is stationed there with the German military. What matters currently is his green white five-color deck. His deck features Pulse of the Fields, Leonin Bola, and Etched Oracle as its superstars.

During the draft, both Twiefel and Roland Bode ended up with five colors. Bode started out playing a straight blue-red deck but by the end of Fifth Dawn he had picked up Bringer of the Green Dawn, Skyreach Manta and Clearwater Goblet to turn into a full-blown five-color deck. Bode is best known as a constructed player, especially for being partially responsible for the restriction of Gush in Vintage. His Grow-a-Tog deck showed the overwhelming power of Gush and led to its restriction.

Before the round started, all three matches received a deck check. Nakamura had received a game loss in round 8 for a registration error. He was very pleased when his deck came back without a problem.

All of the Japanese Pro players gathered around to root on the Japanese team to victory.
Bode stalled on mana in the first game and could only shake his head. Tsumura was doing his best to end the game quickly.

Zink had a large problem when he drew going first. The judge's penalty was a forced mulligan. Tsumura had finished off Bode as Bode couldn't come back from his mana problems. Things had not started out well for Germany.

Zink played a turn two Leaden Myr but Nakamura stopped the Myr with Stasis Cocoon. Chittering Rats came down for Zink while Nakamura played a Skyhunter Prowler. Nakamura Creeping Molded a Serum Tank and then Acquired a Leonin Bola from Zink's deck.

Leonin Bola was also slowing down Fujita but the B match looked as if it would be going for a while.

Synod Centurion and a Grimclaw Bats had come out for Zink. Nakamura played down the Juggernaut as their board clogged up. The Grimclaw Bats kept hitting for one damage a turn. Zink made spell after spell while Nakamura found only more land. Zink's stream of creatures soon overwhelmed the Japanese player.

Tsumura and Bode were back at it. Tsumura played a turn three Razor Golem while Bode had just built up his mana base. That mana base helped Bode cast Bringer of the Green Dawn. Healer's Headdress was the only card keeping Tsumura in the game. I would be impressed if Tsumura was able to come back from a Bringer. Skyshroud Manta and Neurok Spy added to the Bringer's beast tokens and the C match was tied at one game apiece. 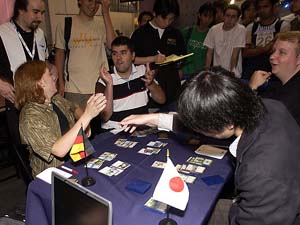 A four-point Opaline Bracers appeared to break the stalemate that had occurred in the B match. Twiefel's Goblin Dirigible was attacking for eight damage a turn. An Essence Drain followed by a Devour in Shadow from Fujita killed all of Twiefel's creatures. All of sudden Fujita was on the offensive. Twiefel had no more threats and was down a game.

Nakamura started out game 2 with an Auriok Champion. The life gain and protection that the Champion provided would help the Japanese player come back to tie the match. Once again the second turn Leaden Myr of Zink's was enchanted with Stasis Cocoon. Myr Enforcer came out on Zink's side but it was quickly Purged. Chittering Rats and Leonin Bola came out as Zink tried to reestablish a board position. Nakamura cast a Skyhunter Prowler to join the Auriok Champion.

In the crucial game 3 between Bode and Tsumura, Bode had out two Neurok Spies, and a 3-point Skyreach Manta. The Japanese player was on the ropes to be sure. Tsumura found no answers in his deck and Germany was on top.

Zink played out a Quicksilver Behemoth and started to attack with it. In combination with Chittering Rats and Leonin Bola, the German appeared to be on his way to taking the match, however Nakamura did have a very high life total because of the Auriok Champion. The crowd continued to grow as this exciting match rapidly came to its conclusion.

In the B match Fujita had out a Pewter Golem with Bonesplitter. It appeared that Twiefel had no answer to this as he began to loudly knock on his deck. Twiefel was forced to start chump blocking as the Golem served turn after turn. A One Dozen Eyes gave Twiefel a lot of additional chump blockers but Fujita had an Echoing Truth to kill all of the eyes. Without the eyes the Golem was too much for Twiefel to handle.

Lightning Greaves and a Cackling Imp came out for Zink leaving him no cards in hand but a strong board position. That is until Nakamura split a Fireball killing both the Chittering Rats and Dross Prowler. Lightning Greaves was sitting on Quicksilver Behemoth leaving the two weenies vulnerable to fire.

The match winner would be going to the finals and the loser would be out. Belgium had defeated Denmark so this match has become a certain elimination match for both teams. Over fifty players gathered to watch.

Nakamura added an Auriok Bladewarden and a Leonin Squire to his team while Zink's deck offered up the Synod Centurion. Lightning Greaves continued to help Zink push through damage. When Nakamura tapped out for a Tangle Golem, Zink responded with a simple, "Wait," before casting Condescend.

When Quicksilver Behemoth came over he was met with a triple block. Nakamura's Auriok Champion and Leonin Squire traded with the beast. Zink cast an Arcbound Hybrid. As he went to attack there was a dispute between the players as to what had been officially declared as an attacker. Colin Jackson ruled that Nakamura had blocked before attackers were officially declared so Zink could go back and redeclare attackers. Zink passed the turn instead. 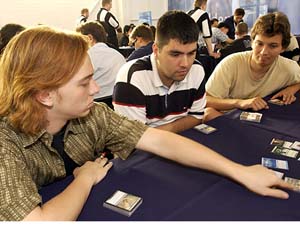 Creeping Mold from Nakamura finally dealt with the pesky Leonin Bola but would it be enough? Zink drew a Dross Golem and hit Nakamura down to two life. Nakamura found a Nim Replica to help out versus the Dross Golem when he cast Acquire on Zink. The Synod Centurion was a 6/6 though so the Japanese chances were small.

A Moriok Scavenger on a Soul Foundry for Zink was the nail in the coffin for Japan. A large congratulatory applause came for the German players. The Team Finals will be Germany versus Belgium.