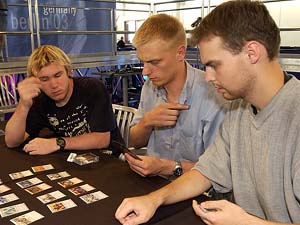 Belgians sat down at this draft table after a heartbreaking loss to Germany in the previous round. Win and they were in the finals; lose and they could finish as low as fifth. The Danish situation was similar, although a finals appearance would require a Japanese victory as well a victory and a loss could mean a disastrous ninth place. Both teams seemed comfortable with drafting at this point on the day, though had slightly different strategies. The Danish seemed to divide responsibility evenly throughout the team, while the Belgians often relied heavily on Geoffrey Siron to decide the picks.

It only took until the very first draft pick for the Belgians to make a miscommunication-fueled mistake. They had put white in the middle for all three previous drafts, so when Vincent Lemoine saw his teammate Siron point at Arrest in the midst of some flurried signaling, he thought he was supposed to draft the white card. In reality, Siron wanted him to take the Viridian Longbow, giving Siron the Electrostatic Bolt and shipping the Arrest onward. When the Arrest disappeared, it was too late for Siron to call an audible and he stuck with the Bolt pick, leaving the surprised Danish with a gift in the form of third pick Longbow for Andreasen.

The rest of Mirrodin passed without major incident. The matchup in seat A was developing into a blue-black Affinity mirror match, although Dilson Ramos Da Fonseca had the option of splashing red for Atog. In seat B, Lemoine's deck was looking atrocious until a Pentavus landed in his lap in pack five. He looked to be playing white-green, but was probably gearing up for sunburst in Fifth Dawn. His opponent, Soren Boll, was in the midst of cobbling together a solid white-red deck. Finally, in seat C, Siron's white-red concoction looked powerful but shallow, with triple Skyhunter Patrol as the highlight. Across from him, in front of Lars Dam, sat Grab the Reins and double Electrostatic Bolt.

When it was time for the first pack of Darksteel, Belgium again seemed to have problems. After a flurry of disorganized signals, Lemoine ended up with a Greater Harvester and Echoing Courage, with only the Courage making his final deck, while Siron took Quicksilver Behemoth and Tangle Golem, neither of which fit well into his white-red deck. Clearly they should have switched where they put the Tangle Golem and the Greater Harvester (which was a well-justified hate draft, as Ramos Da Fonseca had first picked Fireball).

In the second pack, the Danish passed up three shots at a Panoptic Mirror, and the powerful artifact ended up in front of Siron. So far he had Electrostatic Bolt, Raise the Alarm, and Altar's Light as possible imprints. From the same pack, Lemoine grabbed Stand Together when Denmark's green mage opted for Essence Drain instead. He was rewarded a pack later when the Belgians returned the favor. In the fourth pack, Andreasen gladly took a Sword of Fire and Ice and Ramos Da Fonseca, his opponent, just as gladly picked up Murderous Spoils. The pack definitely helped Andreasen more but the matchup still seemed roughly even.

From pack five, Siron happily first picked Leonin Bola and Lemoine made an arguably incorrect pick when he took Viridian Zealot over Stand Together. Through some twist of fate he somehow got the card back when Denmark passed it up with all six of their picks. Kai, in the standings, shook his head, muttering, "This is amazing…" He clearly disagreed and clearly wished he could be down there under the lights instead. The final Darksteel pack contained another questionable pick when Lemoine and his slow green deck took Leonin Bola, denying it from teammate Ramos Da Fonseca's blue-black Affinity that should have been able to make better use of the equipment. 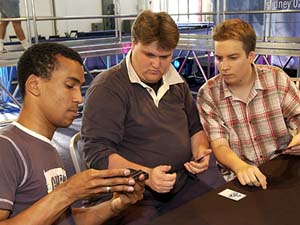 Time for some power. It started fast when Lemoine first picked Bringer of the White Dawn. From the same pack Siron took Skyhunter Prowler, a fine card but it looked a little sketchy when it meant that his opponent picked up Skyreach Manta. The next pack of note was the third; Denmark took Blind Creeper, Magma Jet, and Skyreach Manta, shipping a second Bringer (the red one) to Lemoine. This pick would come back to haunt them. The rest of the draft was straightforward, with Dam finding possible bombs in Rude Awakening and a surprise sixth-pick Summoning Station. Belgium decided they liked Blind Creeper, Loxodon Anchorite, and Vulshok Sorcerer more than the devastating seven-mana artifact.

Belgium couldn't have been more dejected when I talked to them. Geoffrey Siron looked up and said, "There's no way we win" as soon as I approached the table. When asked about the matchups, he pointed at Ramos Da Fonseca and said, "He can maybe win…" and then trailed off. "We need a miracle. It's almost impossible…really. It's the first time I've drafted like this," he continued.

Denmark seemed to concur. "I think it favors us a bit," said Dam. "I think I should win mine and Boll should win his and Andreasen's is 50/50." He also commented on their opponent's mistakes: "They let us have an Avarice Totem, which is really stupid because he's playing against the double Bringer deck. I don't think I would have given that away."


Both decks are very solid, and I agreed with both countries when they stated that the matchup seemed fairly even. Interestingly, Ramos Da Fonseca chose not to play the Atog despite already splashing red for Fireball. The Viridian Longbow in Andreasen's deck could prove to be crucial as it single-handedly deals with so much of Ramos Da Fonseca's deck.

1 Bringer of the White Dawn 1 Arrest

1 Bringer of the Red Dawn


The key to this matchup looked to be Boll's lack of ways to deal with cards, including the word "Bringer" in their title. He has several expensive, powerful cards in the form of Altar of Shadows and Heartseeker but they just don't measure up to the power of Pentavus and double Bringer. Then again, Lemoine was playing cards like Tel-Jilad Lifebreather.


Siron's deck is shallow, but his abundance of fliers will be key in this matchup. Unfortunately he's been forced to include such hits as Screaming Fury, Goblin Striker and Molten Rain. This match looked like it should favor Lars Dam and his moderately powerful sunburst deck. 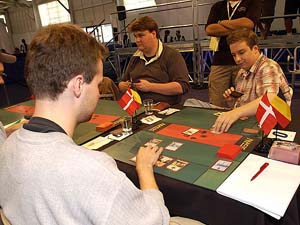 This game was over before it began, as Ramos Da Fonseca took two mulligans and was simply unable to recover. He made an attempt with Cackling Imp, Blind Creeper and Myr Quadropod, but eventually he just ran out of cards in hand. Even Fireball wasn't enough to save him.

Another Belgian mulligan started this game off. Lemoine had turn two Pentad Prism but no turn-three Bringer, despite having the third land type, but then demonstrated some skills when he plucked Bringer of the Red Dawn off his deck for turn four. Boll had the sad combo of Goblin Brawler and Heartseeker; any other creature would have been able to kill the Bringer, but instead he found himself badly behind. When he played Loxodon Mystic it was promptly stolen and sent into the red zone. Stand Together sealed it.

Siron pumped his fist when he cast turn three Molten Rain but Dam had more than enough lands in his grip. He cracked Chromatic Sphere to summon a 4/4 Skyreach Manta, but it met Electrostatic Bolt and his Thought Courier fell to Infused Arrows. Meanwhile two Skyhunter Prowlers and an Arcbound Stinger were reducing his life total. A Leonin Bola helped Dam a little, but then Siron found his own copy of the equipment and the damage continued. Despite having eight lands in play, Dam didn't have access to double green for Tangle Spider and succumbed to the Onslaught of little fliers.

Disciple of the Vault and Blind Creeper supplied the early beats for the Belgian. Andreasen felt that he was under enough pressure that he traded Grimclaw Bats for the Disciple, and then had to face down Battered Golem with his Wizard Replica. His next play was Fabricating for Sword of Fire and Ice, which was far too slow to stay in the game. A Fireball to the dome from Andreasen ended it.

Lemoine started off with double Mirrodin's Core and was well ready to cast whatever sunburst cards his deck delivered. On turn four he brought out Pentad Prism and Vedalken Engineer, furthering his mana situation, then on turn five dropped the elbow with Bringer of the White Dawn. It was poised to recur a Goblin Replica that had traded with Arcbound Hybrid a turn ago. The Replica bounced in and out of play, devastating Boll's board and stranding an expensive Altar of Shadows in his hand. Eventually Boll ran out of options and conceded. Belgium took the first match.

This game looked to be a lock for the Belgians when Dam kept a hand with six lands and Electrostatic Bolt, but his topdecks were magical. Turn two Vedalken Engineer, then turn three another Engineer, followed by turn four Summoning Station. Turn five he played Thought Courier, which drew him into Essence Drain and Leonin Bola. On the turn after that he drew his second Electrostatic Bolt and killed Siron's last creature. Siron shook his head. "You win this one." 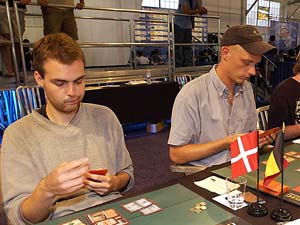 The Dane stared at a hand with a single Island, Vedalken Engineer, and a bunch of green and red spells for a long time. It looked like a clear mulligan but he was feeling the pressure of going down to six cards with the finals on the line and he decided to keep. He paid for it when he was forced to discard Thought Courier on turn two. A turn or two later he found his second land, but he was far behind and conceded on his next turn.

Game and match to the Belgians! A few minutes later, Ramos Da Fonseca also won his game, rendering the match a clean sweep for Belgium despite their initial misgivings. Sunday they face Germany for the coveted Team Title.