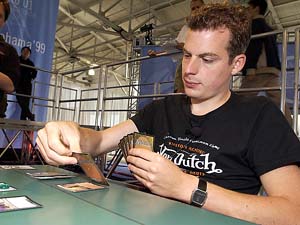 a dominating run through the first three days, Kamiel Cornelissen came into this Top 8 quarterfinal looking to add to his impressive recent Pro Tour resume. Part of Von Dutch, the winners of Pro Tour-Seattle, Cornelissen had his sights set on going back-to-back with a Worlds individual title. Standing in the way was veteran Manuel Bevand, who credited Magic Online with helping him get back into the game.

Cornelissen had the power of Affinity in his hands, while Bevand made it to Top 8 behind Krark-Clan Ironworks.

Bevand saw no land in his opening set of seven and had to send it back with a rueful grin. "I got the best hand ever with no land."

He kept his next set but stalled on two. For an Affinity deck that would be fine, but Bevand was playing Ironworks combo. Cornelissen played a Ravager on the second turn and found a Plating a few turns later while Bevand scuffled for land. The Ravager finished him off in short order.

While they sideboarded for the second game, the two players talked about their playtest games over the weekend. The Top 8 players are given the decklists of all the players once the Sunday roster is decided. At most Pro Tours they have one night to test but at Worlds they have an entire extra day due to the Team Competition. These players have tested their matchups thoroughly.

Kamiel grinned at the French player, "So, I hear you thought this was a good matchup on Friday."

Bevand rolled his eyes, "I have changed my mind. I am actually considering drawing first."

Kamiel slavered, "In testing I tested 10 games after boarding. I went 6-4 when you went first and 8-2 when I went first."

Bevand hated his chances in this match playing or drawing. His deck had a good match-up with Affinity in the Swiss rounds when he went 6-0 but the Top 8 was another matter. "I have played about 100 games and I lost most of them. The matchup is really good if they do not know what is coming. Under these circumstances it is quite different."

Manuel kept his opening draw and took an extremely long time deciding how to play it out. 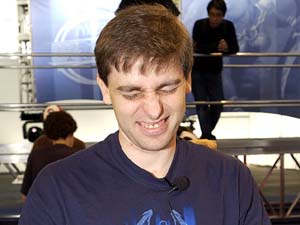 "I have a complicated first turn…I might just kill you. Just kidding."

All Kamiel could do was play an Aether Vial. Nothing but a land for Bevand on turn two while the Dutch player cast a Ravager.

On turn three, Bevand put his deck through its paces. He put down a Pentad Prism and with an assist from the Seething Song he had enough mana to play Krark-Clan Ironworks and Fabricate for Myr Incubator. He then ate some permanents to put the Incubator out.

Kamiel attacked for one and at the end of the third turn, Bevand sacrificed two more permanents to pay the activation on Incubator and made more than 30 Myr tokens. That, my friends, would be game over.

Kamiel had a Vault of the Whispers and Chromatic Sphere while Bevand had the three-mana first turn again. Kamiel was able to lock one of the three down with a second turn Relic Barrier. The Barrier tapped a blue source but Manuel drew a Seat of the Synod and was able to Fabricate for Ironworks. He played out the combo on turn three and indicated to Kamiel that he should scoop.

Kamiel tapped the Incubator on his turn perhaps trying to bluff a Pyroclasm but Bevand wasn't buying and he sacrificed his Incubator and made 30 tokens. If Kamiel had the 'clasm it would be game but there were no dramatics in the offing and he scooped to move onto Game 4. 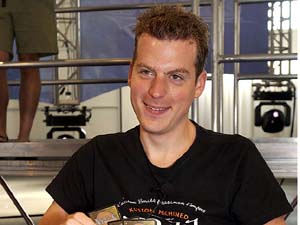 Manuel was clasping his hands together and thanking a higher power for his two games to one edge in the match. "I was lucky to draw the blue mana right then in the last game." He was not lucky with his opening seven and sent them back for a new hand that he elected to run with.

Kamiel played a Furnace and passed the turn to an incredulous Bevand. "Go?" Bevand asked, pumping his fist knowing that he would not be on an early clock. He played a Seat and cast Serum Visions, pushing one card down and keeping a Thoughtcast on top.

Kamiel's Atog was not the most frightening turn-two play his deck could muster and Bevand began to get the sense that he could win the match and move to the semifinals. He played another artifact land and played a Pentad Prism. He then Thoughtcast into Fabricate and a Talisman.

Kamiel's Cranial Plating was picked up by the Tog and Bevand took it with room to spare. He was feeling confident and teased like he was going to take a counter off of his Prism. "Unsummon? Blue Elemental Blast?"

He clasped his hands together and prayed for Kamiel to not have an answer. Cornelissen had the Relic Barrier and tapped the Incubator, forcing the French game designer to activate it before the end of turn. Kamiel did not have a Pyroclasm and the match went to a grateful and humble Manuel Bevand.

"I am so lucky," he professed as he consoled Kamiel. "Amazing draws. Congratulations go to my deck. Not me; I had nothing to do with it. I got lucky."

Manuel explained his sideboard strategy after the match. "I tested Game 1 and it was 8-0 against me when I figured out that I was not going to win that one. I tried every different sideboard strategy until I came up with this one. I have even tested taking out the combo entirely." 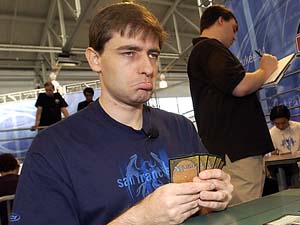 He took out four Condescend, one of each Talisman, Charbelcher, and Fireball for four each of Furnace Dragon and Seething Song. Then depending on whether he was playing first or drawing first he would swap Pyroclasms for Thirst for Knowledge. If he was going first he left the Thirsts in but if Kamiel led off he preferred to have the mass removal spell.

"I came up with this strategy last night before going to bed. The deck is optimized for each situation. I am glad I never had to cast Dragon. Every time I cast them in testing I would lose. I had one game where I cast two dragons on the same turn and still lost from thirteen life."