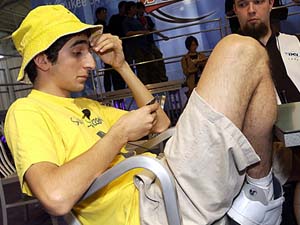 Nassif clinched Player of the Year on Saturday during the teams competition, but that hasn't left him complacent as the 25-year-old Frenchman is looking to add World Champion to his already impressive resume. He even brought out his old yellow hat for the final day, displaying the image he was mostly known for when he first got on the Pro Tour -- before his play made him more than just a shy, gawky kid in a bright yellow hat.

Nassif's opponent is a relative newcomer to the Magic scene, but Aeo Paquette -- known as CoolAeo to his Magic Online opponents -- has definitely made his mark, Top 8'ing both Pro Tours he has attended. The young Canadian is looking to continue his hot streak, hoping that his Ravager Affinity deck -- piled high with interesting card choices like Chrome Mox and Shrapnel Blast in his maindeck and Serum Visions in the sideboard -- will allow him to overcome Gabriel Nassif's permissive blue-white control deck.

Nassif won the roll and chose to play. Aeo kept a hand of Seat of the Synod, Welding Jar, Ornithopter, Thoughtcast, Arcbound Worker, Arcbound Ravager to start the game. Nassif Mana Leaked Paquette's second-turn Thoughtcast and they were off. Another Thoughtcast on turn three met Condescend, as Aeo remained stuck on one land and Nassif was determined not to let him draw into any action. Wrath of God cleared away the Worker and a Frogmite, as Paquette could not draw any new sources of mana, giving Nassif plenty of time to draw all of his answers. Nassif cast an Exalted Angel, hoping to simply end the game with a few swings from the lovely flying beater, but Paquette finally drew a Glimmervoid, letting him Shrapnel Blast the Angel from the sky.

Annul countered an Arcbound Ravager, but Disciple of the Vault resolved, giving Paquette a shot at getting some combo action on, should the other Ravager in his hand manage to resolve. It did and suddenly Nassif looked vulnerable. A second Wrath of God solved that problem, dropping Nassif to 10 from Disciple triggers. Paquette played Somber Hoverguard, which Nassif ruefully Wrathed away trading the Wrath of an Angry God for a solitary sad drone, only to have Paquette play another on the next turn. Nassif matched that with an Eternal Dragon, and the players played Draw, Go for numerous turns, Paquette unable to get any real threats past Nassif's countermagic.

Akroma's Vengeance cleared the board of Paquette's pest, and then Eternal Dragon returned from the graveyard to mop up the leftovers. 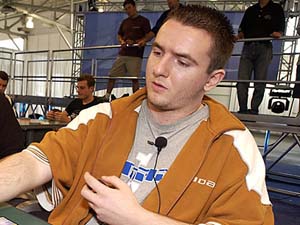 As the players were sideboarding for game 2, Paquette asked, "You just wanna play the whole thing without sideboards?" Nassif smiled and pretended to consider the idea before shaking his head, earning a "You gotta try," from the Canadian.

Paquette kept another one-land hand to start game 2, though this time Chrome Mox made the decision easier. After Nassif kept his hand, Aeo neatly emptied his own, casting Mox, Welding Jar and Cranial Plating before Nassif even had a land on the board. A second-turn Thoughtcast plus a Frogmite gave Paquette a gassy start that looked like it would be hard for Nassif to overcome. Aeo thumped Gab for nine damage on turn 3, meaning Nassif needed to find answers now, or he would have no more chances to do so. Aeo drew Frogmite, but didn't cast it before attacking, dropping Nassif to one through the power of Cranial Plating, but giving the Frenchman an additional draw step to perhaps find adequate answers. The decision was irrelevant though, as Nassif drew his next card and scooped, admitting he probably should not have kept that hand.

Nassif was forced to mulligan his first hand in game 2, telling the audience that his second hand was not much better than his first. Paquette kept a two-land, two Arcbound Ravager, two Chrome Mox hand, giving him plenty of mana and a little gas to boot. Another first-turn Cranial Plating drew a big frown from Nassif, as Paquette's Moxen were giving him big boosts of speed, forcing Nassif to find early answers or die. Ravager and a Blinkmoth Nexus swung for eight on turn 3, but the Ravager died to Purge before any damage could be dealt. Another Purge on the next turn killed a two-counter Nexus, but Arcbound Worker smashed for six, dropping Nassif to 10. The Nexus and Worker beats continued, with a Plated Nexus dropping Nassif to 4, while the Worker died to a soldier token from a cycled Decree of Justice. Another attack from the Nexus was more than Nassif could handle, giving Paquette game 3 through another round of Chrome Mox-fueled beatings. 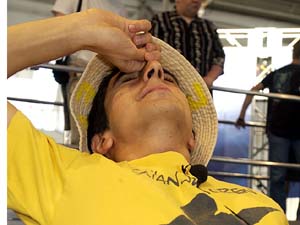 Nassif was very frustrated with his first hand, sighing and shaking his head multiple times before choosing to toss it back. A rueful smile greeted his set of six as well, as he showed four Thirst for Knowledge to Paquette before tossing them back for five more cards and putting himself in a huge hole. Paquette also had a tough mulligan decision facing him. Do you keep a hand containing Thoughtcast, Arcbound Worker, two Serum Visions, Shrapnel Blast, Frogmite and Chrome Mox? Aeo chose not to, betting that a new set of six cards would give him a better chance to blow through Nassif's five-card hand. The new set contained two lands and a Chrome Mox in addition to Arcbound Ravager and Cranial Plating, so it was a keeper.

A turn-two Ravager from Paquette was countered by Condescend, and Annul got a Cranial Plating, buying Nassif some crucial turns to try and draw more answers. Meanwhile Paquette was a bit mana flooded, and Serum Visions didn't help him, sending both cards the bottom. Frogmite beat down for a few turns before getting chumped by a couple of soldiers. Akroma's Vengeance from Nassif cleared Paquette's board for a turn before Aeo rebuilt with a Seat, Thoughtcast, two Chrome Moxes, an Ornithopter and a Frogmite.

Some removal here, a soldier block there, and Paquette was again reduced to drawing and playing lands, looking for something, anything to put pressure on Nassif. It didn't happen though, as Nassif countered everything Paquette threw at him before resetting Aeo's board with another Akroma's Vengeance. Literally 15 minutes passed as no real action occurred, with Gab trading counterspells and removal one for one with Aeo's threats until he cast a Decree of Justice for six angels. Aeo drew his next card, showed Nassif the two Shrapnel Blasts in his hand, and then conceded, and it was on to game 5. 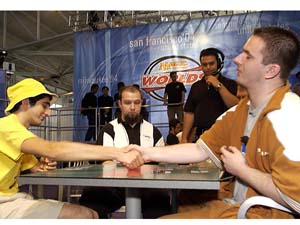 Paquette kept his hand for the final game, as Nassif was forced to mulligan once and then paused for minutes, considering whether or not to toss back his second hand. He kept and then watched as Paquette cast a Welding Jar and Disciple on turn 1. Arcbound Ravager and Ornithopter on turn 2 gave Nassif even more to frown about, the next attack reducing his life total by a very unhealthy 10 when combined with some Disciple of the Vault triggers. Gabriel sighed, played a second Cloudpost and died on the next turn, ending his chances go become the World Champion, but taking home the Player-of-the-Year title as a consolation prize.