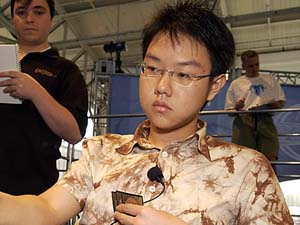 After a Wrath of God from the Malaysian Terry Soh cleared the board early in game 1, the two players got down to the work of rebuilding. Ryo had a little less to work with -- only three lands -- while Soh was working Astral Slide, Solemn Simulacrum, and a Krosan Tusker.

Soh had a 9-3 mana advantage and was able to eventually get to a point where he could keep bringing back and cycling two Eternal Dragons a turn even though he had long since mined all the Plains in his deck -- Lighting Rift made it okay though.

The Japanese player got out an early Sulfuric Vortex this game -- a card that Soh actually had no way to deal with in his deck -- and followed up with a pair of Warchiefs. They were kept at bay with a Silver Knight and Astral Slide. The Vortex kept ticking for both players and when a Siege-Gang Commander came down it seemed that Soh could not possibly get in enough damage to not lose to the enchantment.

He played a Rift but was down 12-9 in the race. Ogura fell to 10 and played an Incinerator and a Goblin Sledder. Soh responded by cycling a Tusker to remove one Warchief with the Slide and shoot the other with Rift.

Soh was holding another Rift and tried to figure out if there was a way he could get 8 points in so Ogura would die on his next upkeep. If Ogura reached his main phase it would be Soh who lost the game. He had six lands in play and two cyclers. One was a Thicket and the other was a Tusker. After about 10 minutes of calculations he realized that the only way he could win would be to attack for 2, play the second Rift, cycle the Thicket (shooting Ogura twice) and cycle into another cycling land. That was his only way of winning and he went for it…

…and he drew the Thicket off the top and cycled to put Ogura on 2. The Japanese player fell to his own Vortex on his next upkeep. 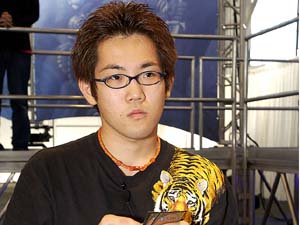 Terry Soh found himself at an early disadvantage in game 3 as a combination of Clickslither, Warchief, and Sulfuric Vortex left him at 10 before Ryo fell to 18 from his own enchantment. Terry had Slide and Rift in play though and was able to keep the Clickslither off the board for a turn by Sliding it during the end of turn step. He also picked off the Chief with Rift.

Goblin Charbelcher was Oxidized, but Soh dipped to 8 from the Vortex. He cycled Slice and Dice after a lot of consideration -- he was actually working out math with his fingers on the table top -- and he killed it with the Slice and the Rift. Ogura played another Sulfuric Vortex and Terry would have needed to hit almost every cycling land in his deck to kill Ogura before they dealt the final 4 to him.

The early portion of the game was a back and forth between creatures and cycled Renewed Faith. A Silver Knight looked good for the Malaysian post Wrath of God but Ogura exploded with Siege-Gang Commander and Clickslither. He had a Goblin Charblecher in play but had yet to use it. Soh cycled desperately for an Oxidize but he could not find one and suddenly the match was tied up at two apiece. 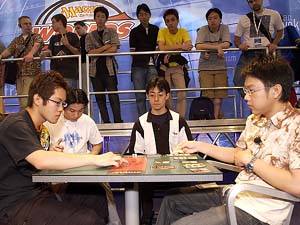 Soh was forced to double mulligan on the play for Game 5, an inauspicious start when facing Ogura's hasty beatdown. Ogura started out very well with a Sledder, Piledriver, and Warchief, smashing Soh's life total and forcing him to find another land for Wrath of God or die. Luckily, Terry's deck was kind and provided the needed resource right on time, clearing the board of the little red men. Ogura wasn't done, however, recovering with a Skirk Prospector and Gempalm Incinerator to keep the pressure on.

Ogura then cast Arc-Slogger, putting Soh in serious jeopardy of dying. Soh played Eternal Witness, getting his Wrath back, but was unable to prevent Ogura from Slogging him out on the next turn in response to the Wrath.

Coming back from an 0-2 deficit, Ryo Ogura was headed to the semifinals.

4 Wrath of God 2 Slice and Dice