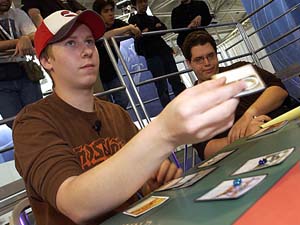 Murray Evans said that to win this match he would need to get early Cranial Plating with one or two creatures to keep the pressure on Nuijten. Then he could use the card-drawing power of Thoughtcast and Night's Whisper to keep the threats coming versus Julien Nuijten's removal.

Evans came out of the gate quickly just as Affinity was designed to do. Evans played down two Arcbound Workers, a Frogmite and Cranial Plating. Nuijten cleared the board with a third-turn Wrath of God while sitting at 14 life.

Somber Hoverguard came out for Evans while Nuijten played the namesake of his deck, Astral Slide. Evans sent in the Hoverguard for six and then Mana Leaked what would have been a devastating Eternal Witness. The Eternal Witness-Astral Slide combo was what Nuijten's deck was designed to do but Evans didn't allow the combo to happen.

Nuijten was forced to continually find cycling cards to keep Somber Hoverguard from hitting him. He played a Viridian Shaman and destroyed a Cranial Plating. When Evans cast a second Plating, Nuijten simply cycled out the Shaman.

Evans tried one last push for the final damage but Nuijten had taken total control of the game with a Decree of Justice.

Evans started out game 2 with a mulligan. After the mulligan he played a first-turn Disciple of the Vault. Nuijten tried to get an easy win by destroying Evans first land with an Oxidize but Evans had plenty of land even after the mulligan. 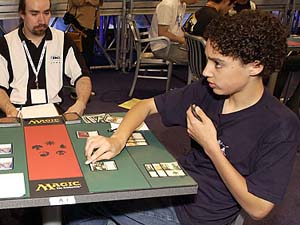 Evans kept sending in Disciple of the Vault for one damage a turn while countering two of Nuijten's Astral Slides with Mana Leaks. Nuijten was determined to get out an Astral Slide and played an Eternal Witness to get one back. Evans used a Thoughtcast and a Night's Whisper to refill his hand. Then he played out Slobad, Goblin Tinkerer, Arcbound Ravager, and an Arcbound Worker but Nuijten had a Wrath of God and then a Akroma's Vengeance to first deal with Slobad and then kill the previously indestructible artifacts.

The Vengeance wiped out too much of Evans' board and conceded after Nuijten played a couple of creatures.

Evans found himself in a must-win situation going into game 3. He needed to win three straight games in order for him to advance to the semifinals.

A Slobad, Goblin Tinkerer came out just in time to save a small piece of Evans' board from Akroma's Vengeance. A Blinkmoth Nexus knocked Nuijten to one life for the second time in the match. Nuijten played out a Eternal Dragon to hold of the Nexus but if Evans drew a land his second Nexus would deal lethal damage.

He knocked on his deck and drew . . . Night's Whisper. The Whisper found Evans a Shrapnel Blast that killed Nuijten the following turn.

Nuijten mulliganed to start game 4. Evans started off the game with a Chromatic Sphere. Once again, Nuijten went for the mana screw plan, using his Oxidize on Evans' first land. This time the strategy seemed to be successful, as Evans didn't have a second land. 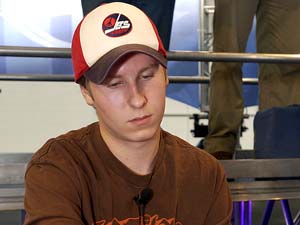 On his third turn, Evans played out a Seat of the Synod and used his Chromatic Sphere to make the mana for a Disciple of the Vault. Nuijten used an Eternal Witness to bring back the Oxidize to leave Evans landless once again.

Evans discarded on his next turn and then for the rest of the game whenever he found a land Nuijten would have another Eternal Witness to retrieve the same Oxidize over and over. After Nuijten had three Witnesses in play Evans had finally had enough and conceded with a lone City of Brass in play.

The 15-year-old Julien Nuijten was moving on to the Worlds semifinals.