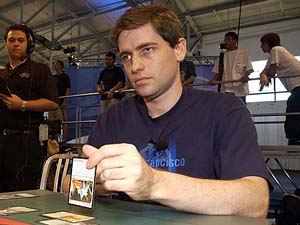 didn't take long for Manuel Bevand to knock the rust off his game, defeating top-seeded Kamiel Cornelissen 3-1 in the quarterfinals. Rookie Aeo Paquette also knocked off a favored player -- soon-to-be-crowned Player of the Year Gabriel Nassif.

Bevand went 6-0 during the Standard portion while Paquette went 5-1, proving there was some serious juice behind these darkhorses' pursuit of the individual title.

Bevand's deck revolved around the Krark-Clan Ironworks/Myr Incubator combo while Paquette was playing Affinity. He led off with a Vault of the Whispers. Paquette played a Disciple of the Vault and Welding Jar before passing the turn.

Bevand had a much more explosive turn two. He dropped out a Talisman, a non-imprinted Chrome Mox before casting Thoughtcast. Paquette played down an Arcbound Worker and Ornithopter.

Turn three and four were where Bevand's deck can quickly become lethal. He defeated Cornelissen on turn three multiple games in the quarterfinals. After laying a Great Furnace, Bevand began to think. Eventually he decided on a Pentad Prism and a Thirst for Knowledge. Paquette's forces had not put Bevand on a short clock, with his next attack putting Bevand on 16. Paquette threw a preemptive strike at Bevand, hitting him with a Shrapnel Blast and reducing him to 10 life.

Bevand played out a Krark-Clan Ironworks but didn't have the rest of the combo pieces to finish off Paquette. Bevand played Thirst for Knowledge in the following turn. Once again Paquette got in a small attack that left Bevand at 6. Bevand tried a Condescend on Paquette's Arcbound Worker, but this was just the opportunity Paquette was looking for finishing off Bevand with a second Shrapnel Blast. 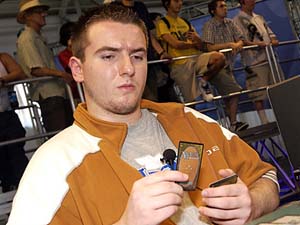 "I just wanted to let you know I countered your Arcbound Worker," said Bevand while sideboarding for game 2.

"See I wanted to let you know we interacted," Bevand replied with a smile. Ah, combo decks.

Bevand played a land while Paquette played Chrome Mox, land, Disciple of he Vault and an Arcbound Worker. On his second turn Bevand played a Pentad Prism and a UB Talisman.

Paquette could only watch helplessly as Bevand uses a Pyroclasm to wipe out Paquette's board. Paquette starts to search with a Serum Visions and again.

Bevand passed his turn with six mana untapped plus a full Pentad Prism. He used the mana to Condescend a Seething Song from Paquette. Paquette had planned on playing a Furnace Dragon. With the Condescend, Bevand found a Furnace Dragon of his own which wiped the board clear and won him the game. 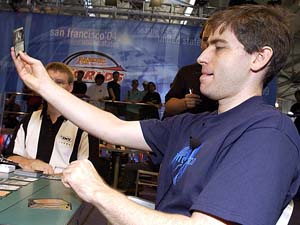 As Paquette took a mulligan to start game 3, the two players talked about the potential finals match ups.

Bevand was rooting for the Astral Slide deck to win calling the match up a bye. He was a little unsteadier when it came to Goblins saying it could go either way in five games. Paquette said that he would rather face down Goblins than Slide but that neither are especially good match ups for his deck.

Paquette had a turn-one Arcbound Worker and a turn-three Frogmite for the beatdown while Bevand just played out land. A turn-four Arcbound Ravager was Mana Leaked by Bevand. The Ravager would have been a much faster clock than the three a turn from the Worker and Frogmite.

After an attack that put Bevand to 12 life, Paquette cast another Arcbound Worker. Bevand let the Worker in but used some card drawing when he cast Thirst for Knowledge

Paquette attacked Bevand down to 8 life. Each turn Bevand would lay a land and say go without casting anything. Paquette thought and then decided to cast a Shrapnel Blast that resolved leaving Bevand at three life. He died when attacked by Frogmite and Arcbound Worker.

Neither Paquette nor Bevand have any early plays in game 4. The only spell cast was a second-turn Serum Visions from Paquette. The hoard of little artifact creatures did not come out, as they are accustomed to doing.

Bevand searched into his library looking for some business spells with a Thirst for Knowledge. When he tried a Pentad Prism Aeo was quick to Annul it. Paquette probably remembered how much the Prism helped Bevand cast Furnace Dragon game 2. 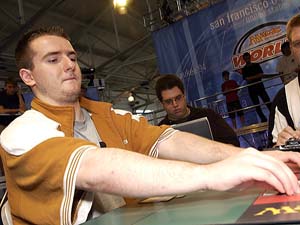 Paquette played a Seething Song followed by a Furnace Dragon. The Dragon was Mana Leaked by Bevand. Bevand does get a Pentad Prism into play on the following turn but has no other play.