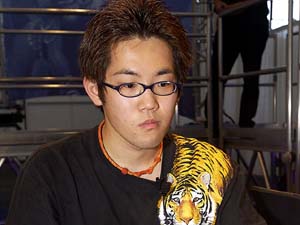 Nuijten, the youngest member of a young Top 8, started the match with a handshake and an offer of good luck. Ryo Ogura accepted the handshake and the competitors were on their way.

Ogura, utilizing his trademark technique of slowly picking his hand up one card at a time, found a strong hand of three lands and four spells. Across the table Nuijten shuffled up for a mulligan. He looked concerned when he saw his six card hand. "No," he said as he tossed that one back too. Looking up at Ogura, he explained, "Three Dragons each hand."

He dealt out five cards. After seeing them, he glanced at his deck, clearly wanting new ones, but then shrugged. "Sure."

He missed his second land drop for a turn, then another, and another. Meanwhile, Ogura had the perfect curve: Skirk Prospector, Sparksmith, Goblin Warchief, and Siege-Gang Commander. That was enough.

Sideboarding for Nuijten:
In: 2 Oxidize, 3 Circle of Protection: Red
Out: 1 Plow Under, 4 Viridian Shaman

Both players kept their hands for game 2, although Ogura's hand seemed to develop poorly. On turn two he could only attack for one with a Blinkmoth Nexus, meaning that the first permanent on the board was Nuijten's Astral Slide. He had four mana due to a Rampant Growth and was able to slide out Ogura's Warchief. He then untapped and dropped Eternal Witness, recovering one of his cycle lands. 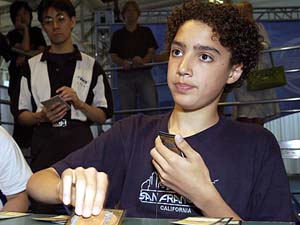 Ogura's next play was Goblin Charbelcher, giving him a possible way to win this game. Secluded Steppe was cycled and the Witness brought it back. Then on Nuijten's turn he gained two with Renewed Faith and brought back Tranquil Thicket. Ogura had no play, sitting with Belcher mana open.

Witness again jumped in and out of play during Ogura's second main phase, putting Nuijten even further ahead. When Nuijten tried to do it again on his own turn, Ogura responded by cycling Gempalm Incinerator and targeting the Witness with the damage. When Nuijten saved it with Renewed Faith, Ogura saw his chance and targeted the Witness with the Charbelcher. Unfortunately for him, Nuijten had yet another cycler in the form of Eternal Dragon. Eternal Witness ducked into limbo and a flurry of effects fizzled in her wake.

It did seem like this play might have been a mistake on Ogura's part, because Nuijten had already drawn enough cards that it was almost sure he had another with cycling. The other option was aiming the Charbelcher at Nuijten's dome, which would also require a good dose of luck but had a chance of winning the game right there. In any case, Nuijten found the Oxidize he was looking for and took down the Charbelcher.

When he also found a Circle of Protection: Red and brought back Oxidize with his Eternal Witness, Ogura had seen enough and conceded.

Nuijten shuffled his sideboard into his deck and picked out fifteen cards, but in the end there weren't any changes. Ogura didn't bother. There wasn't much talking, which wasn't surprising as they didn't have a common language. In any case both players were all business.

Ogura picked up a hand of three Mountains, two Goblin Warchiefs, Clickslither, and Siege-Gang Commander. Eventually he kept it, but he wasn't happy about the lack of early plays. When Nuijten failed to play Astral Slide on turn three, Ogura sat back and considered his turn four options: Sledder and Sharpshooter, Clickslither, or Siege-Gang Commander. He seemed to be worried about Wrath of God, so chose the former, which would leave him with a lot of gas in his hand if his board did get cleared.

Unfortunately, Nuijten had only chosen not to play Astral Slide in favor of using Wing Shards on Ogura's deck, and the Warchief and Sledder headed to the graveyard. If he had played Siege-Gang Commander instead, he could have sacrificed tokens to the Shards, hit for five, and still had a lot of pressure on the board. 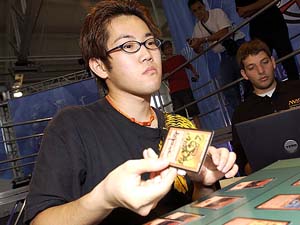 One of the marks of a good control deck is having a variety of answers to the same kind of threat. In this case, the Eternal Slide deck can handle creatures with Wrath of God, Wing Shards, Astral Slide, and Circle of Protection: Red. When your opponent is often forced to make choices about which of these answers to play around, occasionally he'll just end up making the wrong one, and you'll wreck him.

When Nuijten had Astral Slide and then cycled into Wrath of God, Ogura was in a lot of trouble. He tried to rebound with Siege-Gang Commander, but all three of his tokens were immediately slid into limbo. When Nuijten finds a Witness, Ogura is able to kill it, but at the cost of most of his resources. Nuijten then cycled Decree of Justice for five tokens and found a second Witness, leaving no chance for Ogura to stay in the game.

After the game, Manuel Bevand looked over and asked for the game count, then pumped his fist when he heard the news. He has a great matchup against the green-white Slide deck and was rooting for Nuijten to take this match.

Both players kept their hands and Game 4 began. Ogura led with Prospector and Piledriver but was dismayed to see a Circle of Protection: Red. Goblin Warchief on turn three would have delivered 8 damage, but he could only activate Nexus and attack for five, then add a second Prospector.

The next few turns consisted of Nuijten shielding the damage from a couple red men plus cycling a card, while Ogura cycled a couple Gempalm Incinerators and then played Goblin Sharpshooter without haste. Despite it being the perfect time, Nuijten didn't have the Wrath. He had Astral Slide instead, and fell to 13 on the ensuing attack. Ogura played out a second Sharpshooter.

Nuijten looked pleased with his next card. "That was a pretty good topdeck." He asked his life total and then sacrificed Windswept Heath for a sixth land. Akroma's Vengeance. A fine card, but it turned out he needed the Wrath of God instead. Ogura sacrificed his Goblins one by one, shooting Nuijten down to 5, then untapped and showed Clickslither and Goblin Sledder to take the game despite the early Circle of Protection. 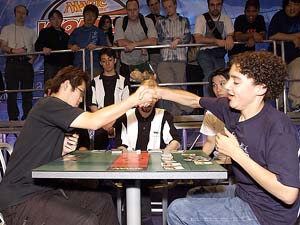 Ogura had to mulligan for the first time this match, and at the worst possible time -- the deciding game. He saw a one land hand with two Goblin Piledrivers, Sparksmith, and two Clickslithers. He chose to keep rather than going down to five. On turn one he didn't find a land, but he did draw and play Skirk Prospector. Turn two he added Goblin Sledder without a land. The look on Nuijten's face was electric; it's clear that he could taste the finals already. He cycled Renewed Faith and played a fourth land. Ogura could only watch with jealousy.

He draws Goblin Warchief and is forced to sacrifice both creatures to play it out. Nuijten runs out Circle of Protection: Red and Rampant Growth, with one mana remaining. Finally, there's the Mountain for Ogura. Two Piledrivers leapt out of his hand and into the red zone. A surprise 7 damage and a hand filled with gas, and there's a small glimmer of hope.

That hope blossoms when Nuijten doesn't have the Wrath of God, but he's accumulated a fair amount of mana. He passed the turn. Ogura added Nexus and Sparksmith, shoved all his guys into the red zone, then hesitated and left Sparksmith back. "Those three guys?" Nuijten asked, perplexed. Wing Shards would have been devastating here, killing both Piledrivers. He could only shield the damage however.

Again he had no play. Ogura activated Nexus and attacked with all but the Sparksmith. Nuijten went to Oxidize the Nexus and Ogura jokingly protected it with his hand, but then placed it in the graveyard. Nuijten shielded the damage from the rest. He cycled Decree of Justice for a token and…

Ogura was forced to pass his next turn without a play, leaving Nuijten to recur his Decree of Justice with an Eternal Witness. This time he made two Angels. When he added a dragon on his next turn, Ogura extended the hand.

It was a hard-fought match, but Julien Nuijten has earned the right to play in the finals against Aeo Paquette for the World Championship and the title of Rookie of the Year.