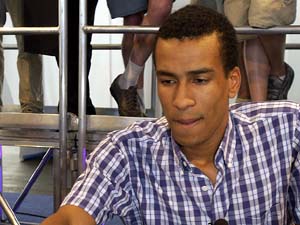 Zink made it to the final day of 2004 Worlds, but it wasn't reigning World Champion Daniel Zink. Instead, his twin brother Sebastian saw action Sunday as a member of the German national team. Sitting across from him was Dilson Ramos Da Fonseca of the Belgium team, which had been in the top half of the leaderboard for the entire weekend.

Sebastian Zink won the die roll but chose to draw first. The two players were in the A seat. Zink's deck featured Fireball, while Dilson Ramos Da Fonseca had a Greater Harvester as his big bomb.

A turn-one Serum Visions saw Ramos Da Fonseca placing both cards on the bottom of his library. Zink played first-turn Disciple of the Vault followed by a Grimclaw Bats. Ramos Da Fonseca played a Spire Golem on his turn while Zink cast a Nim Abomination.

Zink cast Night's Whisper and a Myr Quadropod to guard the table. Synod Centurion came out for Ramos Da Fonseca not to be outdone Zink played a Myr Enforcer. The Enforcer and Centurion traded with one another.

After much deliberation, Zink finally played a Nim Replica. On his next turn, he cast a Clockwork Condor. Ramos Da Fonseca brought out some removal with an Essence Drain. It was good timing because the next turn Zink made Ramos Da Fonseca discard a land to Fill with Fright.

Zink attacked with Grimclaw Bats and Nim Replica. Ramos Da Fonseca's Arcbound Stinger traded with Nim Replica that dealt two more thanks to the Disciple of the Vault.

An attack with Spire Golem put Zink at 5 life but Zink's Grimclaw Bats came over unblocked and put Ramos Da Fonseca to 6. Zink was quick to make X=6 on his Fireball at Ramos Da Fonseca's head. 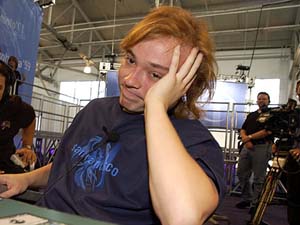 Ramos Da Fonseca kept his opening hand while Zink went back in for a six new cards. Ramos Da Fonseca cast a turn-two Arcbound Slith that was poised to cause big problems for Zink. He did find a blocker with Grimclaw Bats and the two traded when Ramos Da Fonseca attacked.

Ramos Da Fonseca refilled his hand with a Night's Whisper. Then on the following turn, he played out a Clockwork Condor. Zink once again had no play. Greater Harvester came out for Ramos Da Fonseca.

Zink once again chose to draw for the third and deciding game. Ramos Da Fonseca had a turn-three Talisman of Progress while Zink played out a Nim Replica on the third turn. Ramos Da Fonseca drew two cards with Night's Whisper to fill his hand back up.

Zink sent in the Nim Replica and then played a Fleshgrafter but it was met with a Condescend for two. Ramos Da Fonseca played a Synod Centurion that was only being protected by the Talisman of Progress.

The Nim Replica once again hit Ramos Da Fonseca, who soon got to Annul a Myr Enforcer -- visibly paining Zink. Ramos Da Fonseca swung in with the Centurion and played an Arcbound Stinger and Neurok Spy afterwards. Down 16-12 on life, everything else looked to be in Ramos Da Fonseca's favor.

Zink played out a Grimclaw Bats and passed the turn. Ramos Da Fonseca attacked with the Arcbound Stinger and Neurok Spy. Zink was knocked to 13 life. 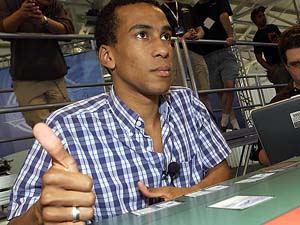 Ramos Da Fonseca attacked with everything, putting Zink to 4 life. Then Zink refilled his own life when he Essence Drained the Grimclaw Bats. Finally he cast an Arcbound Slith. Zink needed a miracle card.

Zink played a Nim Lasher and a Clockwork Condor in a last effort to turn the tide of the game. But there was no help coming for Zink, and Ramos Da Fonseca notched a match win for Belgium.