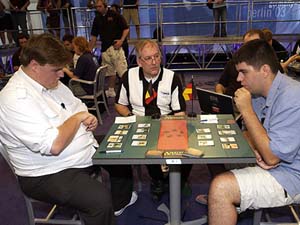 the World Team Championship-deciding match, two relative unknowns carrying their counties on their back were pitted against one another, with the deciding game in the deciding match truly one of the more amazing comebacks in Worlds history.

Following in Kai Budde's footsteps as a National Champion leading his country to the finals, Twiefel -- a tree trunk-legged giant of a man -- was paired against the equally larger-than-life Vincent Lemoine. With both players sporting white-green decks splashing red, creatures bogged down the ground, leading to tremendously complicated build-ups.

The opener was all about speed. Lemoine's choice to play first proved fruitful, with a speedy creature draw from the start. Turn one Scimitar, turn two Raise the Alarm, turn three Skyhunter Prowler…wave after wave of offence sprung forth from the Belgian's hand. Twiefel stabilized, but at a creature disadvantage, he could only look on in frustration when Vincent's Leonin Bola came into play. Soon enough, he scooped 'em up.

Sadly for Belgium, Vincent's draw game 2 wasn't quite as quick, and that gave the German the time he needed for stability and eventual superiority. Healer's Headdress held down the table until Loxodon Anchorite could live up to its name, creating a marathon game that took almost an hour on its own. Vincent managed to maneuver Torben in such a way that Unforge took out Skyhunter Prowler and the equipment, it was too little to late: Eventually, Living Hive came to play and ended the marathon, along with all of his little friends.

With the news that Roland Bode had won and Sebastian Zink lost their respective matches, Twiefel knew it was up to him. Vincent started out fast again, taking the German to 8 in a flurry of attacks. However, a key misplay of a Horned Helm actually had the Belgian doing one point less of damage than he could have.

Lemoine sent in a wave of attackers, including a helmed Loxodon Punisher, a Viridian Acolyte and two tokens. Twiefel blocked one token with a Loxodon Anchorite, and at that point Lemoine moved the helm onto that token before damage and played Stand Firm (forcing the anchorite to tap to prevent damage to itself).

If Lemoine had waited until after damage was on the stack, the Punisher would have dealt three extra damage -- and Anchorite could have only prevented two of those points. Instead of possibly taking 5, Torben takes 4 to drop to 8. 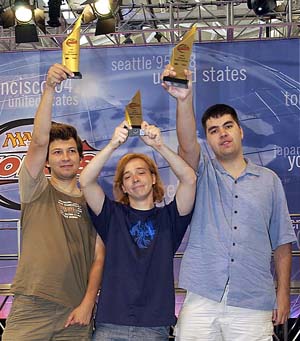 But then, Lemoine started drawing land, turn after turn. The German sat with Grab the Reins in hand as insurance, but slowly evened the creature count and then turned it to his advantage. Turn after turn, Vincent could only stare in disbelief as he drew and played lands, until finally the Hive was back, taking him first to 14, then to 8, finally attacking with the resulting insect swarm for the victory.

The title was Germany's. The Zink family has a new Championship belt, and Kai's is not the only legacy worth celebrating. For Torben Twiefel -- who'd lost to Vincent on Saturday -- there's only sweet revenge and time for celebration…and perhaps, less of a void on the mantle.