Posted in Event Coverage on September 8, 2004 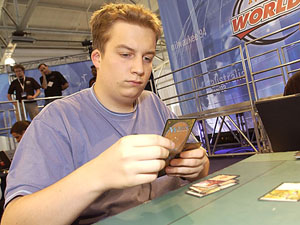 Geoffrey Siron and Roland Bode finished the draft with sunburst style decks, although Siron’s is based in green while Bode’s is based in blue. Siron has a Bringer of the Red Dawn and Duplicant as bombs, but didn’t seem confident in his deck. Bode, on the other hand, had a core built around two Vedalken Engineers and two Spire Golems, with a Skyreach Manta providing some more air support. Siron’s answers consisted of mainly a Tel-Jilad Archers and a Leonin Bola.

Siron looked at his first hand and said with all honesty, “It’s fine.” His opponent looked at his own hand with a raised eyebrow, as if unhappy to see it, but then kept as well. Bode led off with Vedalken Mastermind while Siron had Darksteel Ingot, Tangle Asp and Wayfarer’s Bauble. He then missed a land drop and added Krark-Clan Stoker, with Bringer of the Red Dawn in his grip.

Bode wasn’t doing much of anything, although he did block when the Stoker rumbled in. Baton of Courage came down and pumped once, representing a nasty recurring combat trick in combination with the Mastermind. Siron added Pentad Prism for two, poised to play the Bringer next turn. Bode, seemingly randomly, had his Mastermind bounce itself at end of turn.

The reasoning became clear when he untapped and used Engineered Explosives to blow up all permanents with a casting cost of two -- Tangle Asp and Pentad Prism. Siron could only frown. It’s possible that he could have played the Bringer on the same turn as the Pentad Prism if he had used the Stoker to generate extra mana off the Prism, as he already had access to three colors of mana and Prism could be used to wash two of the extra mana into the two missing colors. Not foreseeing the Explosives, though, he had no reason to hurry.

Bode replayed the Mastermind and added Tel-Jilad Outrider, which fell to Barbed Lightning with entwine. Siron would have liked to target the Mastermind but fell short of having enough damage due to the two counters still sitting on the Baton. Bode then summoned a 3/3 Skyreach Manta. Granite Shard traded with Rain of Rust, and the Manta began to take three point chunks out of Siron’s life total.

Siron began to race with Furnace Whelp, but when he tapped out to summon the Bringer (for the full 9), his only blocker -- Arcbound Stinger -- was removed by Essence Drain. Baton pumped the Manta twice, then was bounced by the Mastermind and replayed, providing more than enough damage to take the game.

“So my explosives for two were very good, I think. Did you have the bringer at the moment?” Bode asked. “Yep,” came the reply.

They then discussed how Bode could have dealt a lot more damage if he had been more aggressive with his Mastermind and Baton of Courage, but Bode said he felt more comfortable playing it safe. Still, he should have known that Barbed Lightning, the only instant-speed removal in Siron’s deck, was already used up, so returning the Baton at end of turn each time would have been perfectly safe. 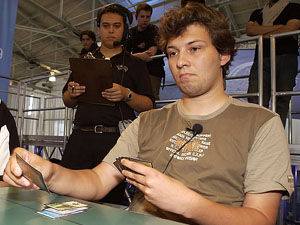 For the second game, Siron kept a sketchy hand of five lands, Darksteel Ingot, and Goblin Brawler. He summoned the Brawler on turn three but was more than trumped when Bode used Vedalken Engineer to make a turn-three 4/4 Skyreach Manta. Hardly fair.

Siron bluffed 2 damage through when he confidently pushed the Striker into the red zone and then played Tel-Jilad Wolf, but the rest of his hand was all mana. The Manta returned the favor for 4 and Bode made Goblin Replica and a Copper Myr.

Siron drew yet another land, bringing the total to eight. He played out Ingot and passed the turn. Goblin Replica and Skyreach Manta charged into the red zone despite the first striking Goblin Brawler. Siron pretended to read the text of one of his cards, but that didn’t change the fact that it was a Forest. He blocked.

Baton of Courage made another appearance. With few outs left, Siron proceeded to draw a ninth land. He did an admirable job of keeping a straight face but inside he was surely seething. Again he did his best to bluff the existence of spells in his hand but in the end could only pass the turn.

Siron took 7 from the next attack and, despite drawing Tel-Jilad Archers, was more than dead.

“Anyway, they’re gonna win,” Siron said afterwards, pointing at his teammates. It was close, but not to be, and Belgium has to be happy with second place this year. Roland Bode and his German teammates have earned the right to be World Team Champions in 2004.

1 Bringer of the Red Dawn
23 Cards

Posted in Event Coverage on September 8, 2004