Popular Magic columnist and former Bounty Hunter Josh Bennett is roaming the halls of Pro Tour Philadelphia to bring you all the entertaining stories and tidbits straight from the tournament floor.

Got a story suggestion? Discuss 2005 Pro Tour Philadelphia on our message boards and post your suggestions, comments, and ideas and we'll do our best to satisfy your appetite!

Fifteen minutes into the round, Murray "The Mauler" Evans was regretting his decision to wake up. In an elimination match, Benjamin Caumes handed him a 2-0 defeat before you could say Jack Robinson.

It took a little longer for Masahiko Morita, but he soon found out that it's tough to beat someone who has access to 58 cards. Thanks to two Myojin of Seeing Winds , Tsuyoshi Ikeda only had two cards left in his deck by the time he dealt the killing blow in Game 1. Game 2 followed a similar (but less ridiculous) pattern, and Ikeda swept the match. 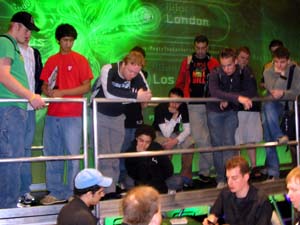 The remaining Feature Match was Kamiel "The Ideal" Cornelissen against Gadiel Szleifer, whose hat was turned at a jaunty angle, showing that he meant business. The Dutchman was with White Weenie, while the up-and-coming American had a spicy Hana-Control. The back-and-forth of three games brought them to time. After the five turns, it was clear that Szleifer had control of the game, so rather than give them both a loss, Cornelissen scooped to him.

The bloodbath continues as our field of 105 players was cut down to just 69. Those going back to bed include:

Just some quick counts for those of you who are interested. Looking at the decks of the undefeateds and 6-1's, we come up with the following counts for the format's key cards: 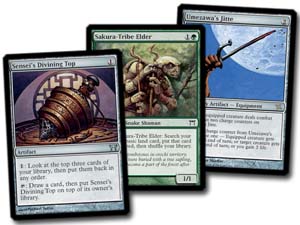 Also, those 18 decks include a number of White Weenie decks (as well as Morgan Douglass and his army of Ninjas), surprising those who assumed the later rounds would be a sea of control-on-control matches. Could it be that the control players weren't as ready for the Great White Hype as they thought they were?

Morgan Douglass finally earned his second loss with ninja at the hands of Jelger Wiegersma's green-white control deck in Round 8. It was a bit of 2-0 carnage, witnessed by Invitationalists Sam Gomersall and Julien Nuijten. 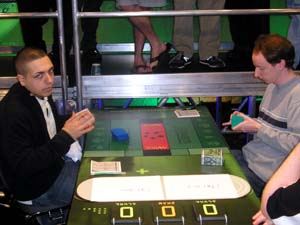 TOGIT to go: Either Fabiano, left, or Harvey would be out after Round 8.

"Well, I guess I can't have turn-two Ninja of the Deep Hours every game," bemoaned Douglass.

Kamiel Cornelissen's match finished soon after, never a good sign for the glacial Dutchman. Osamu Fujita dispatched him 2-0, sending Kamiel to the sidelines.

Last to finish was the match between teammates Gerard Fabiano and Eugene Harvey, an elimination match. Harvey won the first game handily, but his draws were uncooperative in games two and three. Despite failing to maximize his position ("He should have massacred me," said Eugene) Fabiano emerged victorious.

The field has narrowed to just 44 players, an odd sight at a Pro Tour Day Two. So far, the players have been awarded a total of $118,650, with much more cash to come.

During the Extended Qualifier Season, there was a little deck that turned a lot of heads: Jim Roy's Metamorphose-Scepter deck. It was an interesting idea, locking someone under Metamorphose and winning at your leisure (Jeff Cunningham ran a Metamorphose in his board of Scepter-Chant against Control), but the one thing people kept coming back to was the single Rotting Giant in his sideboard. The most curious of them all was old-timer John Shuler.

Now Shuler's not the sort of guy who lets things go easy. He frantically scoured the Internet message boards for a hint at the reasoning for the Giant. He tried again and again to track down Roy's email address, but he failed. Then the idea came to him: Roy would be at the Pro Tour he'd qualified for! It was so simple -- 180 miles was nothing compared to quieting his demons. Of course, by the time Shuler showed up at the tournament on Friday, wild-eyed and expectant, Jim Roy was nowhere to be found. 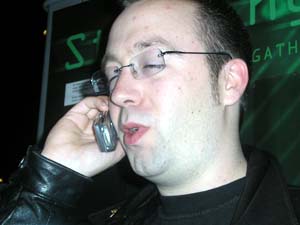 Jim Roy tried to reveal his secret to John Shuler.

Roy heard about this crazy man who had traveled 200 miles to ask him a question, and so this morning he took an opportunity to give Shuler a call. He got the answering machine, and so left a detailed account of his playtesting and the rationale behind his mighty Giant.

"I'm pretty sure Shuler's going to have a heart attack when he gets this," said Brian David-Marshall

Roy is making good use of his qualification. After eight rounds, he was sitting pretty at 7-1 with multicolor control. He unhesitatingly calls Sakura-Tribe Elder the most important card in the format.

"Don't forget to tell him your philosophy of 1-of's," reminded Cunningham.

"It's not something I think a lot of people give thought to," answered Roy.

Basically, Roy believes that there are a lot of times when diverse threats are better than redundant threats, something that's made very clear with this block's focus on legends. For him, it's a logical extension of the idea of maximizing the value of the cards you draw.

And this isn't a philosophy he follows lightly. At the behest of Murray Evans, I dug up his Chicago 2003 Masters Gateway decklist. Check it out:

Saturday, May 7: 1:09 pm - Rumors of Kai's Return Were Sadly Exaggerated

After Round 8, just three players remained of those who started this event with a depressing pair of losses. They've survived despite having their backs against the wall, and have advanced by marching over the crushed dreams of their opponents.

Good luck to all three! 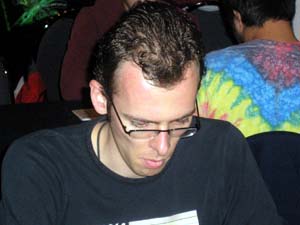 Tom van de Logt was one of several big names in the PTQ.

You have to be at least a little crazy to get yourself involved in a 200-plus person Pro Tour Qualifier, particularly when it's Sealed Deck. There are enough rounds that if you start off strong you've just won your way into a minefield of stupidly powerful decks. You might be able to shrug this off, thinking that your play skill will let you overcome the worse players. That just doesn't wash on a Pro Tour Saturday.

Shuffling up their decks are a number of the on-again, off-again talents from across America, old pros who have decided to get back on the Gravy Train. The field is peppered with some of Japan's better minds, and every could-be-but-isn't-yet who's just one strong Pro Tour performance from starting their career. Players are in for a rude surprise when they find themselves paired up against the likes of former World Champion Tom van de Logt, Germany's David Brucker, or Canada's own Jon "rarely" Stern.

Oh, and there'll be nine rounds. Time for that perseverence and passion to pay off.

I mentioned Friday that we'd be bringing you higher-res copies of some former Pro Tour Top 8 matches, distributed via BitTorrent. I can now announce just which matches will be coming your way in the near future, and oh my, they're doozies.

First up, a milestone in Magic's history, the legendary match between Zvi Mowshowitz and Tsuyoshi Fujita at Pro Tour-Tokyo 2001. It was this finals appearance that officially marked Japan's ascent to the top levels of competitive Magic, and put Mr. Rolly on the map.

Secondly, and if you for some reason only download one of these it should absolutely be this one: Bob Maher versus Brian Davis, Pro Tour-Chicago 1999. Players are STILL talking about this finals. The full five games, and every single one winnable by Brian Davis. Watch how Maher capitalizes on Davis's mistakes, and see why this is one for the ages.

But if you can't wait a couple weeks, there's a sneak peak available if you watch Sunday's webcast. While we're all breaking for a fabulous lunch around 1:30 p.m. ET, we'll be filling your computer screen with Maher-Davis!

You may have noticed Antonino De Rosa looking a little larger than life this afternoon. It wasn't from his usually combination of friendliness, bluster and pastries, however. No sir, this time it was because De Rosa finally had enough experience to advance to LEVEL FOUR.

Now not only is he qualified for the next year, but at every Pro Tour, his entrance will be greeted by a scantily clad lady handing him a bag with a dollar sign on it. Inside? A cool grand. Oh, and he'll be flown out free of charge to an event of his choice. No wonder he's showing everyone his goofiest smile.

Joining him in that rank is partner in crime Gerard Fabiano, whose elimination in Round 11 nevertheless hands him the key to Level Four.

Meanwhile, Shu Komuro sneaked into the Top 128 to push him from Level Four to Level Five, joined by the mighty Jelger Wiegersma and Shuhei Nakamura. They'll be getting flown to every event and handed $1500 in gold bullion. 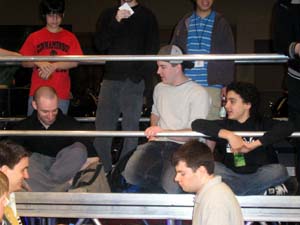 Julien Nuijten, seated right, was eliminated Friday but still earned a spot in the illustrious Level 6.

Of course, the young champ Julien Nuijten and Oliver Ruel (who will Top 8 this event) have crested into Level Six. That means free airfare and hotel, scads of cash, a personal island, lunar real estate, the cover of Time, and a commemorative plaque engraved and bejeweled in their honor.

Also facing possible advancement are three of those in the hunt for Top 8: Gadiel Szleifer, Ichirou Shimura and Kenji Tsumura, but they'll have to finish strong to make the jump to the next level.

In other news, I'm sad to report that Mark "Haberdashery" Herberholz pulled out a nail biter against Jim Roy to send him packing.

Also, I'd like to give a shout out to my main man The Wolf, the man who's been keeping it real since Jester's Cap, the man who's taken over Ontario tournaments from Vintage to Mental Magic, the man who just got a bye into the Top 8.