Popular Magic columnist Ted Knutson is stalking the halls of Pro Tour Los Angeles to bring you all the entertaining stories and tidbits straight from the tournament floor.

Got a story suggestion? Discuss 2005 Pro Tour Los Angeles on our message boards and post your suggestions, comments, and ideas and we'll do our best to satisfy your appetite! 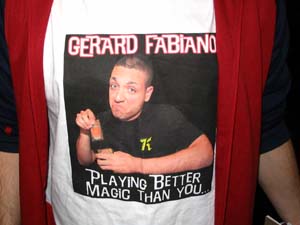 Magic players are an interesting group. Some of them quietly go about their ways, dueling for dollars and fame, but generally shying away from the spotlight. Others seem concerned with building their own stars, hyping their own names whenever possible and making sure that people know who they are and what their accomplishments have been. None of them, however, are Gerard Fabiano.

Gerard is intimately involved with the Gerard Fabiano Fan Club, a fan club whose sole purpose is to glorify the man they call Ghetto Fabulous. Started by a small child from New York, whom Gerard refers to as "The President" but whose actual name he cannot remember, the fan club's membership ranks have swollen to double digits in the last year, and include such notables as Neil Reeves, Gabe Walls, and Mark Herberholz. The one driving tenet of the fan club, aside from hyping Gerard, is that people should get free cheesecake on their birthdays. Some members have also contributed extra funds (membership is apparently $6) to obtain Gerard's AIM name and even purchase t-shirts, which you can see here sported by model Craig Krempels.

Neil Reeves: "Without people like Gerard, there couldn't be people like me."
Gabriel Nassif: "Cheesecake? I didn't get free cheesecake on me birthday. This is so stupid…"

We tried to obtain comments from Osyp Lebedowicz, but rumor has it that he's a bit jealous of his fellow King, and stormed off in a huff without saying anything. 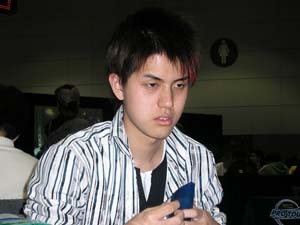 Tsumura can practically book a spot in the Top 8 at Constructed events.

The Japanese have officially gone Godzilla on the Pro Tour, leveling opponents as if they were mere skyscrapers dotting the Tokyo skyline. As we have mentioned previously, success has bred greater interest in the game among Japanese pros and attendance for them has increased at each successive Pro Tour. This weekend they sent an astounding 47 players to Los Angeles, and perhaps more incredibly, 57 percent of them qualified for Day Two. What's interesting though is that of the Top 24 players in the round 10 standings, only three are Japanese, meaning they still have a bunch of players battling, but few of them are near the top of the standings right now.

Two Japanese players who are doing well (as expected) are Kenji Tsumura and Tsuyoshi Fujita. Kenji is running the Japanese Dredgatog deck with some spicy tech like Natural Affinity in the sideboard, a card that allowed him to defeat Mark Herberholz during their match on Day One. Simply put, he's one of the best players in the world and is approaching the point where he is almost even money to Top 8 every Constructed tournament he enters.

Fujita is one of the elder statesmen of Japanese Magic, though as you can see from his Pro Tour player card, he still keeps a light heart about the game. Earlier this weekend, Mike Flores and I were discussing the great deckbuilders in the game and Flores said, "Man, I had a great States. I have to be as good as Fujita now, right?" I pointed out that Fujita still had this tournament and Worlds to design amazing decks for in order to retain the title. With his performance thus far this weekend, there can be little doubt that he's still the best deck designer in the biz. Saturday once again features a full eight rounds, so anything can happen, but once again it looks as though the Japanese are on the rise, and this time nothing short of the National Guard or a whole bunch of mana screw may be enough to stop them. 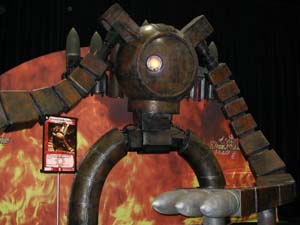 Even this mighty armored walker from the Duelmasters North American Championships may not be enough to stop the Japanese. 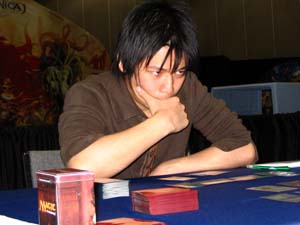 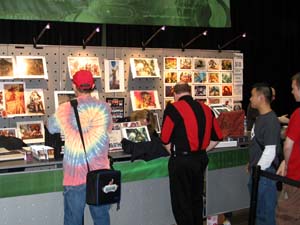 Hiding from the camera are artists Thomas Baxa, Terese Nielsen, and Pete Venters. 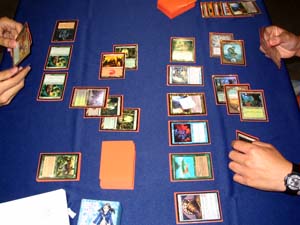 Yes, that's a Stormscape Apprentice in play. Pierre Canali's Crazy Pedro deck has some interesting cards choices, that's for sure. 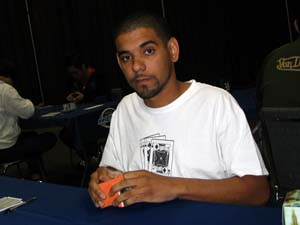 A Sponsor's Exemption got Dave Williams to the Pro Tour, but his play skill was what put him into Day Two.


Saturday is half over, meaning there are four rounds left before the final cut to the Top 8 is made. Here's a look at what the five players at the top of the standings have faced thus far Saturday, and how they have fared against those decks.

We'll be revisiting this breakdown at the end of the day. 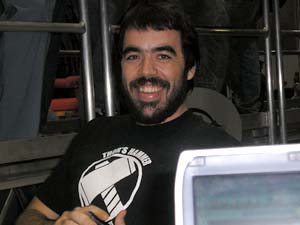 Moreno was the No. 2 American after 14 rounds.

There aren't many American "names" lurking at the top of the standings, but there are a couple of players that you might not know looking for a chance to make a name for themselves.

William Moreno is a 24-year-old student who is in the process of moving to New York City this week to "be a better boyfriend." His first Pro Tour came last year at this time in Columbus where he finished 93rd. He's playing Madness Tog this weekend, a deck that he came up with while attempting to break Psychatog and from the Loam.

"I knew was going to be really great with Togs, but I kept trying to build a control version with it and failing because I just couldn't find the right mix of control elements," he said. "I eventually decided that I knew I wanted Centaur Garden and Cephalid Coliseum, which led me to think about Blue-green Madness decks and I just kind of ended up here."

"Here" is apparently a very good place to be, since Moreno is now in 4th place with two rounds to go and needs at least one more win to lock up a spot in his first Top 8. 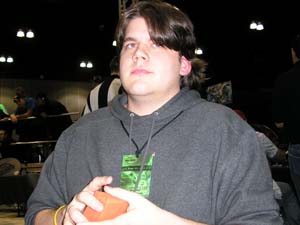 Peebles-Mundy follows in a long line of CMU Magic stars.

Benjamin Peebles-Mundy is one of a seemingly endless supply of Magic players who just happen to attend Carnegie Mellon University. This 20-year-old junior is attending his first Pro Tour after winning a slot via qualifier back in the block constructed season and finds himself in 7th with two rounds left to go, sandwiched between Antoine Ruel and Basque Separatist/London Top 8 member Arnost Zidek.

Peebles-Mundy said that the PT Jank deck (Red-white beats and burn) he is playing is the result of a Monored Beats deck he and his CMU teammates had been playing on Magic Online. Once the new dual lands came out they decided to run splashes for a variety of cards including Wild Mongrel and Dark Confidant, but eventually ended up with a strong, versatile red-white deck instead.


William Moreno may have earned the official nickname of "Dream Crusher" with his performance in the final round here in Los Angeles. Looking at the standings before the round, Moreno's tiebreakers looked good enough to get him into the Top 8 regardless of the outcome of his pairing against Bernardo Da Costa Cabral. However, Moreno wasn't interested in scooping, so the two men sat down to do battle, Golgari Madness against Madness Tog. 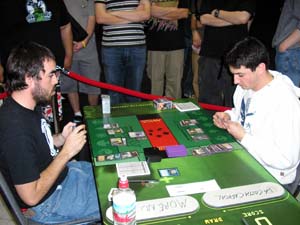 Moreno, left, didn't want to leave his fate up to tiebreakers.

Game 1 went to Umezawa's Jitte, which just happened to be attached to a series of creatures controlled by Moreno. Game 2 flipped right back to Da Costa Cabral. Moreno had an early Smother for Bernardo's Wild Mongrel, but Psychatog followed the dog into play and then stayed there. It looked like Moreno might be able to pull things out if he got one more turn, but Da Costa Cabral made sure that wasn't happening, discarding Wonder before blockers and then trampling over Moreno's blocking Wonder with exactly enough damage to kill. Psychatog backed up by Brawn is some good.

Game 3 was one of those games that seemed to come down to the fact that Moreno played first. He was always a turn ahead on the board and was winning the damage race, but the real break came over a counter war over Smother on Da Costa Cabral's Psychatog. Moreno had just enough mana to get in an extra Circular Logic, shipping the Tog to the graveyard while Bernardo still had two Logics left in hand, but no mana leftover to cast them. The Belgian player then drew nothing but disruption spells and died at the hands of Basking Rootwalla and Wild Mongrel like so many players before him.

A late inquiry from Bernardo about a concession from Moreno was rebuffed, with the explanation that William really needed the extra money from the seeding he would get from a win here and he felt it would be irresponsible to scoop the Belgian player into Sunday. 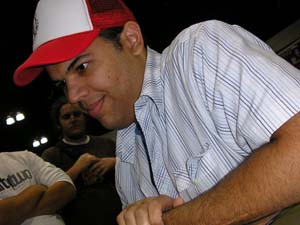