Jon Finkel is simply one of the all-time greatest players the game of Magic has ever seen. He was winning tournaments before there was anything called a Pro Tour. Once the Pro Tour set up shop in the Puck Building one blustery weekend during February of 1996, Jon Finkel began winning there as well. In addition to his unprecedented – and still unmatched – career with 11 Pro Tour Top 8 finishes, Jon racked up two Junior Pro Tour Top 8s during that first season. That means Jon has played on Sunday of a Pro Tour a staggering 13 times, just one of several reasons why he was the top vote-getter among eligible players.

"It's a great honor to be elected to the Pro Tour Hall of Fame," Finkel said. "Playing Magic was one of the best experiences of my life and prepared me for everything else I have done since. I am very happy to be recognized by the Magic community for my accomplishments in this game. " 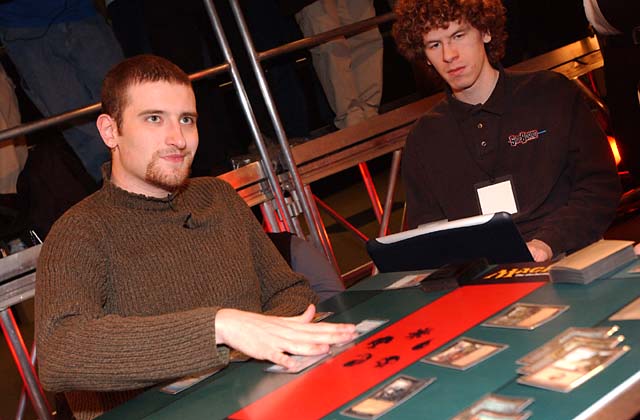 Finkel mastered the mind game that is Magic.

Toward the end of that first Pro Tour season, Finkel had built up the confidence to get in the ring with the big boys. He swept through the Standard portion of U.S. Nationals 1996 with Blue-white Control – an archetype that would become his calling card – although he failed to make the Top 8. At Worlds that year (the event that put made him eligible for the first Hall of Fame ballot), he finished ninth playing a modified Turbo Stasis.

The following season was a quiet one for Jonny Magic with "only" three Top 16 finishes to show for his efforts on the senior circuit. He did make the Top 8 at U.S. Nationals but lost out in his bid to be on the National team.

The 1997-98 season was Jon's breakout year. He finally broke through to Sunday in Chicago. He posted two Top 32 finishes at the next two Pro Tours before winning a Pro Tour in New York. The Top 8 there included two players with whom he came up through the ranks – David Bachmann and John Chinnock. His victory over Bachmann in the semifinals – and the securing of that first trophy by defeating Dominic Crapuchettes – seemed to mark an important moment in Jon's career as he drifted from being one of the "Jersey kids" to developing a lasting relationship with the Deadguys: Dave Price, Chris Pikula, Worth Wollpert, and Tony Tsai. Jon also made the U.S. National team that year. The U.S. won the team event at Worlds, Jon finished third in the individual competition, and won the title of Player of the Year. Players began to get the sneaking suspicion Finkel was the best player in the game.

By Jon's own admission, he had accomplished everything he had set out to do in Magic and his motivation level declined after the '98 season, which is hard to believe when you consider the accolades and trophies that he had yet to win.

That drop in motivation did nothing to dispel the legend, though. It may have only served to build it up as Jon continued to breeze his way through the Pro Tour with seemingly little preparation, displaying an ease that has never been matched. He made two more Top 8s the next season, losing to his good friend Steven O'Mahoney-Schwartz in the finals of Los Angeles. That was also the year he passed off the title of Player of the Year to Kai Budde and set the stage for countless debates of "Jon vs. Kai" as to who was the greatest player ever to sling a spell. 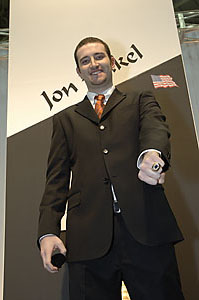 Jon joined forces with Steve OMS and Steve's brother Dan to form Antarctica, one of the greatest three-person teams in history. They finished third at the inaugural Team Pro Tour in Washington, D.C. (losing to Your Move Games and fellow Hall of Famer Darwin Kastle in the semis), and in an exhibition tournament for ESPN2 reached the finals against Black Ops (a squad featuring a pair of up-and-coming players in Olivier and Antoine Ruel). Later that year he was the U.S. National champion and went on to defeat Bob Maher, Jr. in the finals of the World Championships for his second and final Pro Tour title. To top it all off, he lead the U.S. National team to victory in the team competition as well – winning more than $40,000 of his lifetime $291,896 winnings in that one weekend.

Jon's win at the 2000 Magic Invitational immortalized him as the Shadowmage Infiltrator. Jon reached the Top 8 four more times over the next three seasons – he had two during the 2000-01 season and two more during 2002-03 – with his last such appearance being in the Top 8 of Pro Tour-Yokohama 2003.

In Yokohama, his play against Benjamin Caumes in that final Top 8 showed just what made Jon such a great player over the course of his career. Jon had a Sparksmith on the board without another Goblin in sight and was not holding one either – he actually had very few in his deck. Ben had played Wirewood Herald which threatened to fetch one of Caumes' Timberwatch Elf – a card that could be disastrous for Jon. So what did Jon do? He shot the Herald allowing Ben to put the Timberwatch from his deck into hand. Caumes assumed that Jon had to be holding another Goblin or he never would have shot the Herald in the first place, and refused to play the pumping elf until it was too late. From his first Pro Tour Top 8 in the Junior division of New York to the Top 8 of Yokohama, Jon exemplified the mental aspects of the game like no other player.

Asked for the person he would most likely thank for his Pro Tour career and the honor of being inducted into the Hall of Fame, Jon had an unexpectedly sweet answer.

"It is clearly my Dad," he said. "The reason I was able to become the best Magic player in the world was clearly my Dad. He bought me my first computer in 1981 and played games with me my whole life."

Listed below are the decklists from Jon Finkel's Top 8 appearances on the Pro Tour, World Championships, and U.S. Nationals.