Not in Yokohama for the Magic World Championships?

Fear not! Our illustrious team of snoops, sleuths, peepers and finks are on hand at the most important Magic event of the year sniffing out all the juicy tidbits of goings-on that would normally end up on the metaphoric cutting room floor. And this time we're involving you in the action. Are you rooting for a particular pro player and itching for an interview? Are you nursing an awesome story idea just waiting to get covered? Discuss the 2005 World Championships on our message boards and post your suggestions, comments, and ideas and we'll do our best to get you the insider scoop!


I wanted to take a quick moment and show the Guild distributions from two strong tables for draft one.

Saito was the only player to go off-guild. Because of the blue-red deck's existence, many of the other players had to scramble for playables in splash colors, stretching their mana bases and making for only one Boros and one Dimir drafter at the table.

That's right, Olivier Ruel was the only Selesnya drafter at his table and his deck is reeeeediculous. In fact, looking around the draft tables here this weekend, it seems like green-white is the one guild archetype readily available if you are looking for it. This is interesting because BDM, the man who probably knows more about this format than anyone except Rich Hoaen, says that it just might be the strongest one around.

The only question is whether Ruel, who has played high-level competitive Magic the last six weeks in a row at different spots around the world, can overcome what looks like a growing case of exhaustion to keep his Player of the Year hopes alive.

In round 7 action, Masashi Oiso and Gadiel Szleifer squared off in an epic battle. With the match tied at one game a piece, Gadiel had a tremendous start, getting a ton of early creatures in play and swinging for lethal damage on turn six against Masashi's army of undersized men.

Oiso thought for a second and then threw down Dryad's Caress, untapping all of his animals, gaining some much-needed life and destroying Gadiel's attack. He then ripped his eighth mana source off the top of his deck and cast Razia, Boros Archangel, winning the match in style and running his record to 5-2.

In round 8, New Zealand's own blisterguy received his first feature match at a Pro Tour, where his Boros fattie deck matched up against Nicolai Herzog's Selesnya deck. Unfortunately for fans of the uncapitalized beepmaster his deck was uncooperative in providing an appropriate amount of lands in either game, and the Norwegian Limited specialist bashed him with tokens while Hammerfist Giant remained woefully stranded in blister's hand. 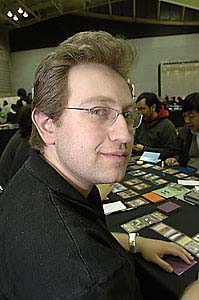 Alex likes to his options open!

Some of the readers popped up in the forums wondering about the circumstances surrounding Alex Shvartsman's last-place standing. I wish that we could report something cool like Shvartsman was really a Russian Mafia hit man sent here to annihilate Olivier Ruel and guarantee the first Japanese Player of the Year, but the answer to this story is tragically normal.

In reality, the owner of King's Games in Brooklyn still has a high enough rating to occasionally qualify him for premiere events, even though he generally only shows up at Pro Tours to buy and sell cards. Back at Pro Tour-Nagoya, he found out he was qualified when he arrived in Japan … and got out to an early 2-1 lead before arriving one minute late to the second draft because he was busy closing a deal and did not hear the announcements.

Here in Yokohama, the resolution of the mystery requires even less Columbo'ing. Alex simply wanted to keep his options open for the future and registered for the tournament, then dropped before the first round, preserving his rating and earning two more Pro Tour points for the future.


Randy Buehler is now demanding complete accountability from the blog writers. The flawless Director of Magic R&D saw me pat myself on the back Wednesday, but he read that I called Kenji's deck uh… awful earlier and ran up to me gleefully after Round 8, exclaiming that Tsumura was now 2-0, so his deck couldn't possibly be very bad. Fine, I said, I'll show the deck to the people and let them decide.

After a second look, the deck isn't as bad as I first believed. There's a pretty decent amount of filler in there, but any deck featuring two Galvanic Arcs, Brainspoil, Disembowel, Moldervine Cloak, Plague Boiler, and Dowsing Shaman probably has a chance, especially when piloted by someone with Tsumura's level of skill. But the truth is that it was not I who called Kenji's deck terrible, it was Kenji himself. Regardless, the diminutive master of Magic still managed to pull off a 2-1 record with the deck and is now 7-2 heading into the last draft of the day. 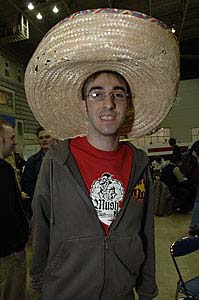 The spirit of Satoshi 'Hatman' Nakamura lives on here in Yokohama 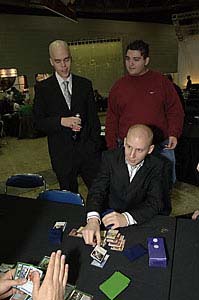 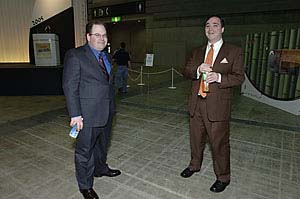 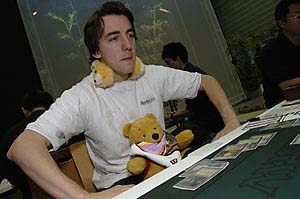 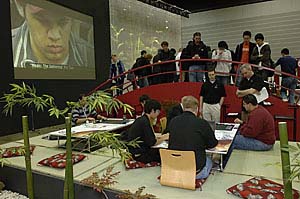 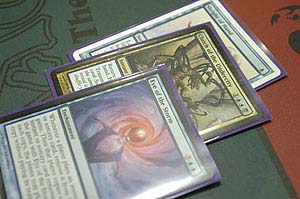 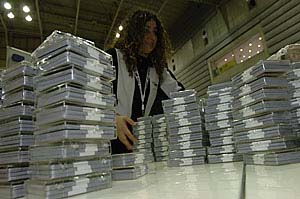 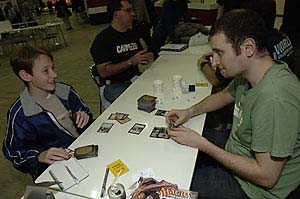 This pint-sized gunslinger discovers that Jon Finkel has a chocolate-coated exterior with a soft, gooey center. 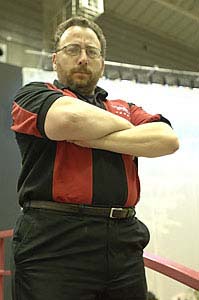 Thursday, December 1: 6:29 pm - News and Notes plus Catching Up With the Candidates 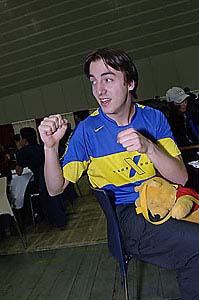 Even at 0-5 for the day, you can't knock the enthusiasm out of Olivier Ruel.


Friday is Extended Day and it's the last day of swiss here at Worlds, setting up the Sunday Top 8 and possibly deciding the Player of the Year race. Discussion among players this weekend has been interesting because I'm pretty firmly of the opinion that CAL is the strongest deck in the Extended field right now. The uncounterable draw engine plus hand disruption plus Solitary Confinement gives it strong game against every single deck in the field, and yet there doesn't seem to be a lot of respect for it in the hall this weekend.

After CAL, however, the metagame is once again wide open. The Japanese seem to prefer Dredgatog and Scepter Chant, the Americans generally seem to like aggression (though Neil Reeves is a control player through and through), there are some Euros who appreciate the power of CAL, and as for the rest of the world, who knows? Plenty of players have been talking about running Boros, Black-green, and Affinity simply because those decks are easier to build, and not everyone has put a lot of thought into what deck they are going to play on Day Three.

I'm going to stick my neck out again and prognosticate for a moment. Here's my prediction for the three most important sideboard cards Friday: Kataki, War's Wage; Blood Moon; Suppression Field. You heard it here first (and as always it's possible that by this time on Day Three, I'll wish you hadn't).

Turning back to Thursday's play, when you take a look at just the draft records, we see the familiar name of London Top 8 member Johan Sadeghpour at the top of the Draft Day standings. The other undefeated players on the day were Nikolas Nygaard, Andre Coimbra, Stewart Shinkins, and Katsuhiro Mori.

As for the Player of the Year race, Kenji ended the day in 33rd, Masashi lost his last match to finish in 64th, and Olivier managed to finally snag a win to finish Day Two in 193rd place. All three players have been almost unstoppable in Extended recently, but as of right now, Kenji is clearly the frontrunner with six more rounds of exciting action left to happen. Stay tuned, friends… stay tuned.