The Pro Tour is happy to welcome back the talented One Man Crowd himself, Josh Bennett. He's prowling the floor at Pro Tour-San Diego to bring you an assortment of hijinks, chicanery, tomfoolery, and anything else his thesaurus can dig up.

Looking for the latest stories? 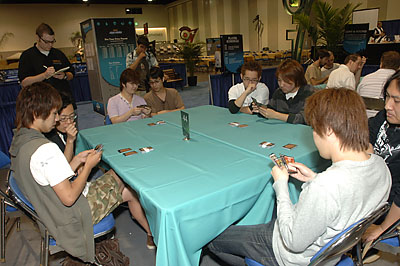 Table 44 was the biggest whammy of the first draft lottery: From halfway around the world to the same pod, a quartet of Japanese superstar teams. The total number of Pro Levels? Merely thirty-one. The deadly pairs were The Two Tomos (masters Tomohiro Kaji and Tomoharu Saito, riding the GP Circuit from Montreal), most of D-25 (four-time PT Top 8er Ryuichi Arita and his Charleston teammate Kazuya Mitamura, who came into his own with a second place at PT-Yokohama), The Big-Os (PT-Prague Champion Takuya Osawa and GP Top 8 fixture Ryo Ogura) and Brain Trust (PT Top 8er and deck design madman Akira Asahara and PT-Nagoya Champ Shu Komura). Unsurprisingly, half the pod was in the Feature Match Area in round 1.

Bad news was also waiting for the Spanish duo of Adriano Rohner and Jaime Marrero Negrin. They were at the last table, the only pod of three teams, sharing a table with Frank Karsten and Roel van Heeswijk. Not the best start to the day, but things got a lot worse when the third team joined the table: The dour Josh Ravitz and The Best Player Ever, Ever, Ever, Jon Finkel. Naturally, the first-round bye went to Karsten and van Heeswijk. 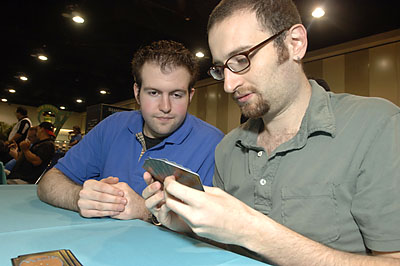 Not the guys you want to see sitting across from you.

The hard-luck trifecta was almost completed when loveable Pro Tour fixture "The" Ben Seck found out just how cruel his friends could be. Unbeknownst to him, they had been working to convince his teammate and co-worker Jeff Liu to opt out of playing the PT, denying TBS his chance at glory. They had even pooled a substantial bounty to sweeten the deal for Liu. There was one stipulation: Liu had to wait to inform TBS of his treachery until they had arrived at the tournament site this morning. Faced with the prospect of the Australian's tears, Liu balked. Hopefully that spirit of fellowship will translate into some match wins.

Speaking of fidelity, yesterday Kenji Tsumura was overheard telling reporter Brian David-Marshall that he probably wouldn't be able to make it to this year's Invitational, should he be invited (and let's be honest, he's getting in).

"I don't think I'll be able to go. My big sister's wedding..." he trailed off with a sigh.

"Wait, the 12th is the start of PT-Valencia. The Invitational is later."

"Oh!" Kenji thought for a moment, then smiled and said "GG Big Sis!"

From old timers to first timers, team formats have a habit of bringing a strange mix of competitors together. Especially now, when a player's Pro Club Level can give him his choice of partners. Antonino De Rosa was planning on taking this to its logical extreme by bringing his mother out as his second, but he came to his senses and instead joined forces with Pro Tour Champion Ken Ho.

Still, many players have taken advantage of their clout. Team Your Move Games has managed to put the band back together, thanks to their significant Hall of Fame muscle. Darwin Kastle is here with retired teammate Chad Ellis. 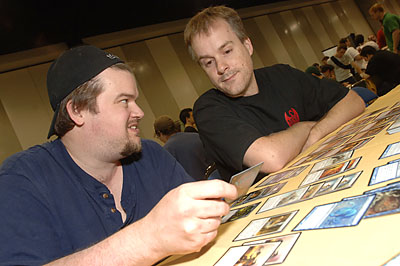 Rob Dougherty and Justin Gary are tag-teaming opponents like it was Pro Tour-Huston 2002, and Dave Humpherys made a last-minute decision to team with Steve Sadin, who needed a qualified partner to make a bid for the pro points necessary to make Nationals. Humpherys came in cold, but the genius that served him so well is alive and kicking. After a 2-0 start, Sadin was overheard saying "This is great! By Round 4 I won't need to make a single decision!" 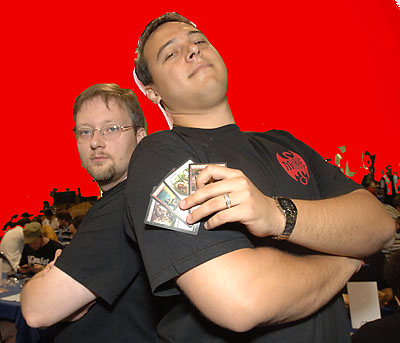 There are more than a few mixed-bag teams out on the floor. Rich Hoaen is battling alongside Jelger Wiegersma in a team cursed to do well yet somehow miss Top 8. 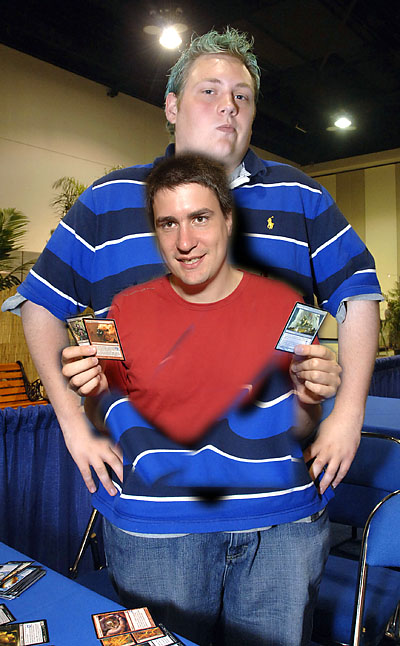 Half Dutch. Half Canadian. All terror.

Masashi Oiso is with Rogier Maaten, sharing a second language for communication. Craig Krempels has wound up with modern hobo Sam Gomersall, and Mark Herberholz has resurrected Pat Chapin, forming a team with a critical mass of mad genius. These teams form a stark contrast to the brotherhood teams in attendance: the Sohs, the Ruels, the Johnstons, and the Piazzas.

The PTQs have produced a surprising crop of teams as well. Greybeard Steve O'Mahoney-Schwartz qualified with Matt Wang. Dutch Dynamos Jeroen Remie and Victor van den Broek followed up their GP Top 8 with a PTQ win to earn themselves plane tickets. The most interesting PTQ story belongs to Australians Ellie Filler and Emily Jehne. Ellie brought Emily to her first PTQ after a crash course in Magic. Emily went from getting her first DCI card to heading to her first Pro Tour in a matter of hours. 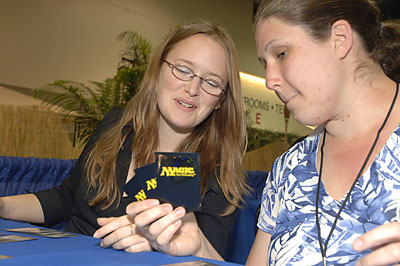 With the new format supposedly paying huge dividends to those who have put in the hours, it will be interesting to see which teams rise to the top. 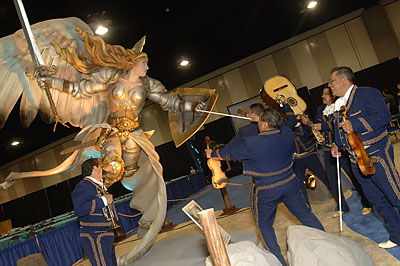 At the tail end of Thursday night's Pro Tour Registration Party, the mariachis have decided to slay the Serra Angel. Godspeed, gentlemen.

The time rift has opened, and 1998 has come through. 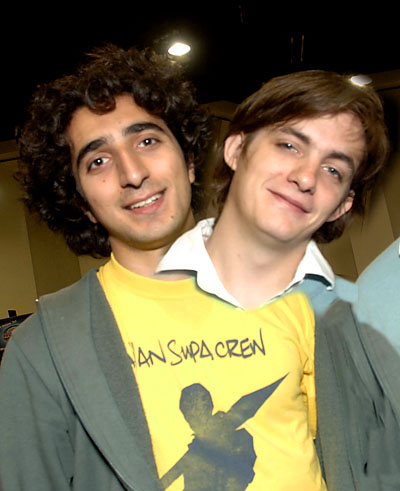 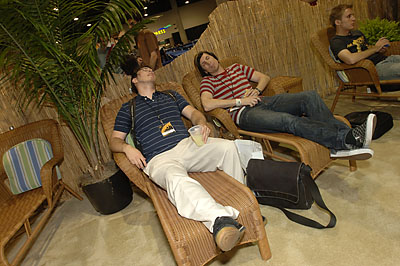 The Pro Player Lounge offers a taste of California living.

Artists Lars Grant-West and Alan Pollack show off their creations. 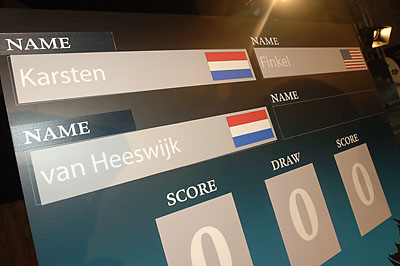 Ladies and Gentlemen: Jon Finkel and Guest. A shortage of name plates pushes Josh Ravitz even further under Finkel's shadow. 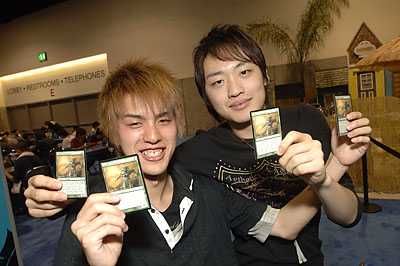 Not only is Kenji Tsumura gangbusters as a mage, he's probably the most sportsmanlike player on the Tour. He caught up with Brian David-Marshall Thursday and had a story to share from GP-Montreal about the Future Sight Pacts.

"At the GP, four opponents... FOUR opponents forget to pay upkeep for their Pact!"

Anyone else, and you'd be right to think the story ends there. A feel-good romp about scoring a bunch of free game wins. But not with Kenji.

"I could only stop three from drawing a card!"

And despite turning down three game wins, Kenji still Top 4ed. When you're as good as he is, being a nice guy doesn't mean finishing last. 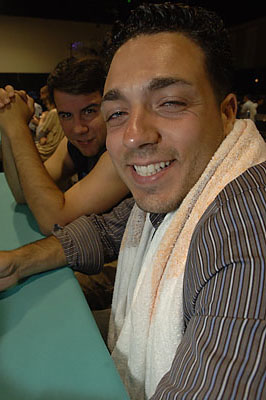 Today's Pro Tour hit a bump early on with a delay before Round 2. When no immediate explanation was given, the more cynical among the players began to speculate that something scandalous had happened and was being kept on the down-low.

Cue Gerard Fabiano. Second only to Osyp in the field of preposterosity, Gerard has seeded the players with a story of a high-level coverup of a fistfight between teammates. After making the rounds, the story has grown to involve threats to press charges, shady back-room deals to keep that from happening, and makeup to erase the tell-tale black eye. None of it true. Not even a little bit.

Now ordinarily a Gerard story will trick one poor rube into making a fool of himself, but this story will not go away. More than once players have tried to get the staff to let them in on the "truth." As Josh Ravitz said when told it was just a computer glitch: "Sure. Sure it is." 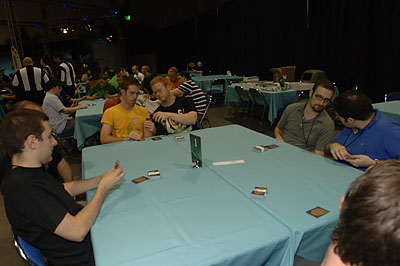 Everyone knows that drafting with the best will teach you a thing or two, but there's sharp proof of that adage at the top table of Draft 3: Five of the eight players (Chris Manning, Eric Berger, Jon Finkel, Josh Ravitz and Steve Sadin) are regulars of FinkelDraft, Finkel's eponymous draft league.

The league's roster is a Who's Who of Northeast American Magic, featuring names like Chris Pikula, Mike Flores, the OMSes, Dave Price, Hashim "The Dream" Bello, and Tony Tsai, not to mention Jonny Magic and Josh Ravitz. They're joined by up-and-comers from all over the New York area, who stop in to study and grow strong. There's a mailing list for discussion and scheduling and even an internal rating system.

It actually draws comparisons to Finkel at the height of his career, drafting every night, not out of desire to win but out of sheer passion for the game. When he cares, he wins. And this time he's brought a bunch of players with him.

For those of you who think there's no harm in waiting, consider this cautionary tale. Team A is at eight, holding Ghostfire, and their opponents are at 3. However, Team B has untapped islands, and so Team A holds back, waiting for a more opportune moment. After all, what's the worst that could happen?

The answer came after Team B untapped. Tap a bunch of lands, kick up a split second Molten Disaster for eight, and in response unmorph Fortune Thief.

Meanwhile, Tiago Chan finally met a goal he's been pursuing. After a dismal season in the 2HG Grand Prix Circuit he had assumed he'd be the lowest rated player worldwide, but he was denied. After a 1-4 performance this weekend, he's confident he has the bottom rung locked up.

He's not the only one plumbing the depths. After an 0-4 start, Mike Girard and Anthony Shaheen tried their best to concede to their opponent. Unfortunately, BYE always loses. 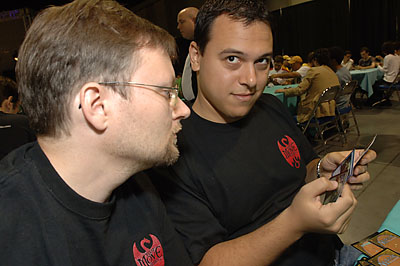 How did the Hall of Famers do today? Well, they were all over the map. Finkel/Ravitz and Humpherys/Sadin stand tall at 5-1, each suffering a loss to Van Lunen/Lachmann, the Sliversmiths. Raphael Levy and Wilfried Ranque barely missed the cut at 3-3, and team Your Move Games went home sad: Dougherty/Gary with one match win, Kastle/Ellis with two. 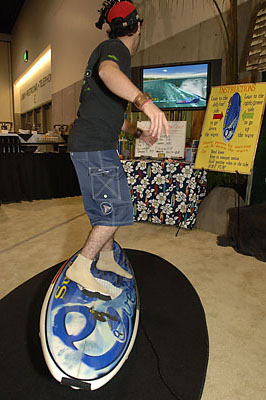 The surfer motif across the tournament's decor reaches its height inside the Pro Lounge, where players can try their hand at a Surf Simulator. High score at the end of the weekend takes home a bowling trophy and equal measures of pride and shame.

And filed under "unexpected at the PT" I give you the following image: 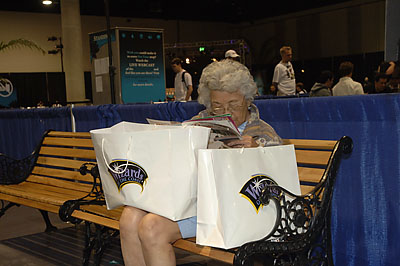